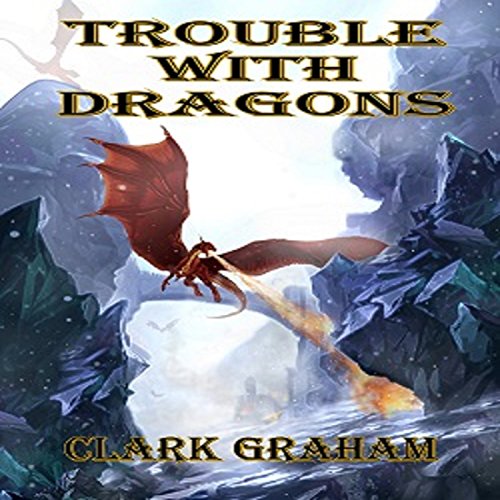 By: Clark Graham
Narrated by: Daniel Nicolai
Free with a 30-day trial

Jason stood in front of the gravestone of Coach Mossberg. The coach had been a mentor and protector to him. His sudden loss effected the whole community. Chills went down Jason's spine. It was an eerie feeling, like someone was looking at him. A voice from behind him said, "He's not here you know." Jason turned to see a short, straight-backed man standing there.

"Talcott? Is that you? What are you doing here?"

"I've come to bring you back."

Jason shook his head vigorously. "I don't want to go back."

The wizard's face reddened and his eyes flashed with anger. "You are the hero of the land, and the land needs you. You have no choice."

Jason stepped back. He hadn't wanted to upset Talcott. He was just speaking the truth. Taking a deep breath, Talcott relaxed his shoulders. "There are dragons in the land. Coach Mossberg tried to help, but he's been captured by them and now sits behind bars in the dungeon. The evil king is free and sits again on the throne."

"What happened, I thought the coach was dead?"

"He is very much alive, but you need to save him and slay the dragons."

"Dragons?" Jason's thought his heart would burst out of his chest it was beating so hard.

"Fear not, you are the hero. The slayer of the Osgarth."

"I thought you might come willingly this time. It matters not, you will still come." Then he turned and walked away, leaving Jason alone. Dejected, Jason walked home. I can't kill dragons. What am I going to do?

What listeners say about Trouble with Dragons

This is a good all around YA fantasy novel. Good narration, a little tinny, but that's production's fault. Good series.
“I was voluntarily provided this free review copy audiobook by the author, narrator, or publisher.”

This book is well written with an unusual twist of the characters moving in and out of the two worlds.
The effect is an increased level to the story with distinct but intertwining worlds that allow the story to play out in a very fun way.

The narration is very well done giving each character a unique sound and feel throughout.

I thoroughly enjoyed this book and would recommend picking up a copy if you enjoy a dragon fantasy book.

I liked the premise of this series quite a lot, which is why I opted to pick up book 2. The narrator did a good job on the narration, though I noticed a slight echo throughout the whole book in this book too. Anyway, it's a fun book with a decent story and good narrator. I enjoyed it enough that I think it would be worth checking out.

This book was given to me for free at my request and I provided this unbiased, voluntary review.

I would like to note I have not read the first book and cannot say whether this is a good sequel.

I enjoyed this book’s story immensely. I am a huge fan of fantasy books especially ones with dragons. The novel, in particular, had an interesting dynamic of having the characters switch in and out of the two worlds. I enjoyed most of the side characters, and I was on the edge of my seat for most of the story. But, there wasn’t much action and it became somewhat repetitive. It was difficult at first to tell which realm they were in. Other than that, it was wonderful.

Daniel Nicolai did a great job reading. He had distinct voices for the characters which was a joy to listen to. The audio wasn’t the best, but he never missed a beat.

Overall, I would strongly recommend this book to those that want a nice dragon fantasy novel.

The narrator kept the story going. This was book 2 and if you missed book 1 you really need to listen to it. The dragons live in one part of the world and a greedy king summons them to the coldest part of the planet. They do not like that area.Teenagers and the rest of the town are drawn into a separate world that they only can access through dreams.There are dragons, wizards, and warpens and some other tiny creatures. They fight battles and when injured the injury is carried back to the world they live in. It was 64 chapters long and some of them were long. This is more YA fantasy but was ok. I got this ARC via audiobook boom and this is my voluntary review.

Story was very well suited for young adult audience. No language or sexual scenes. Just a clean story about a young man and his friends trying to find a way to rid the world of dragons. I received this book at no change in exchange for an honest review. 👍🏻