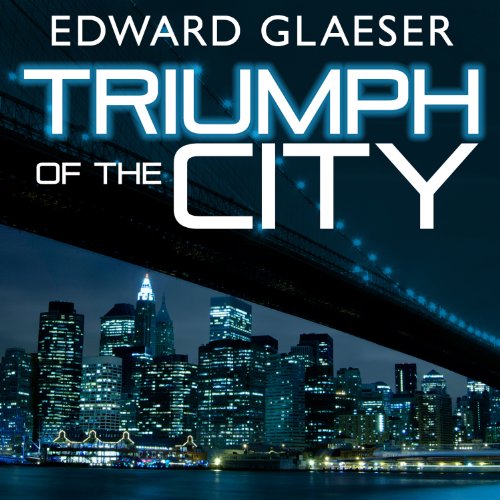 Triumph of the City

By: Edward Glaeser
Narrated by: Lloyd James
Try for $0.00

America is an urban nation. More than two thirds of us live on the three percent of land that contains our cities. Yet cities get a bad rap: they're dirty, poor, unhealthy, crime ridden, expensive, environmentally unfriendly. Or are they? As Edward Glaeser proves in this myth-shattering book, cities are actually the healthiest, greenest, and richest (in cultural and economic terms) places to live.

New Yorkers, for instance, live longer than other Americans; heart disease and cancer rates are lower in Gotham than in the nation as a whole. More than half of America's income is earned in 22 metropolitan areas. And city dwellers use, on average, 40 percent less energy than suburbanites. Glaeser travels through history and around the globe to reveal the hidden workings of cities and how they bring out the best in humankind. Even the worst cities---Kinshasa, Kolkata, Lagos---confer surprising benefits on the people who flock to them, including better health and more jobs than the rural areas that surround them. Glaeser visits Bangalore and Silicon Valley, whose strangely similar histories prove how essential education is to urban success and how new technology actually encourages people to gather together physically. He discovers why Detroit is dying while other old industrial cities---Chicago, Boston, New York---thrive. He investigates why a new house costs 350 percent more in Los Angeles than in Houston, even though building costs are only 25 percent higher in Los Angeles. He pinpoints the single factor that most influences urban growth---January temperatures---and explains how certain chilly cities manage to defy that link. He explains how West Coast environmentalists have harmed the environment, and how struggling cities from Youngstown to New Orleans can "shrink to greatness." And he exposes the dangerous anti-urban political bias that is harming both cities and the entire country.

"You'll...walk away dazzled by the greatness of cities and fascinated by this writer's nimble mind." ( The New York Times)

What listeners say about Triumph of the City

Great story although a little dry at times and seemingly biased by the author's own preferences for density and urbanism. However, the stats and observations make for interesting comparisons of success strategies in a variety of cities.

This is a must for all environmentalists!

This is a book that deserves to be a staple on the shelves of all those calling themselves environmentalists, especially in the USA apparently.
I personally was born with an innate affection for the city life, but having explained in detail why living in the city is, and will be for the time being, the most logic AND "human" choice, and not by some journalist but by a scholar, is one of the great pleasures in life.
The book also opened a bunch of new ways of thinking about the city and introduced me to many new concepts.

Not recommended to hardcore NIMBYs, people who put anything, including animals, before the value of human life and welfare.

The best books help illuminate the contradictions of modern life. Edward Glaeser's masterful Triumph of the City: How Our Greatest Invention Makes Us Richer, Smarter, Greener, Healthier, and Happier is such a book.

Glaeser, an uber-productive and prolific Harvard economist, makes 4 big arguments in Triumph of the City: Cities Drive Economic and Social Progress: The density, diversity, energy, low barriers to communication, mixing of talents, and opportunities to specialize have always driven innovation and invention. Cities are the most productive places in any society, a productivity that is reflected in both higher wages and strong in-migration. Large numbers of people living closely together can catalyze and nurture ideas and connections, while providing a market for these new inventions. It is no accident that the best art, the best restaurants, the best publishing, and the best retail can all be found in cities.

Cities Are Good for the Environment: Cities are green because city folks tend to take public transportation or walk to work instead of driving. City residences are smaller, and often staked vertically, and are therefore cheaper to heat and cool than suburban homes. City infrastructure, such as water, power, and sewage can be provided at scale - where suburban or rural residents rely on individual septic tanks and wells. City parks can serve many many residents, where suburban lawns take up land (and lots of water) for the pleasure of a few homeowners.

Public Resources Should Go to Disadvantaged People, Not Disadvantaged Places: Public efforts to revitalize dying cities that have lost their economic rationale, such as Detroit or New Orleans, are usually misdirected into unwanted building rather than people. Investments in public schools pays off, as these investments both raise the human capital of the students and attract parents into cities looking for good schools. Large publicly funded projects, such as professional sports stadiums or tax payer subsidized office parks (such as Detroit's Renaissance Center) only benefit millionaire owners and builders.

eye-opening book about the benefits of cities

The book makes a compelling case for how cities
were, are and will be critical to the progress of humankind
and why and how we need to value and nurture cities
to continue to reap these benefits

please have every major read this

i read this book because I'm moving to LA and was dreading living in an urban area. This book changed my view of cities and how they are managed. I wish more elected officials would read this wonderful book.

Education . . . and water for all my people

Would you consider the audio edition of Triumph of the City to be better than the print version?

I've only listened to the audio

What other book might you compare Triumph of the City to and why?

it is like no other that I have enjoyed

Which character – as performed by Lloyd James – was your favorite?

I don't understand your question, have you listened to the book?

If you could give Triumph of the City a new subtitle, what would it be?

aligned incentives of urban planning, the key to our future innovation

this was a fascinating listen - my daughter is graduating this year with a degree focused on urban planning for healthy living so I was extra tuned in. The ripple effects of policy, the suggestions for immigration, the keys to so many different reasons for innovation and urban success were insightful - I keep telling all my friends about it, so it must have stuck with me. I got the suggestion for the listen from an article featuring Zappos CEO, Tony Hsieh.

This book taught me a great deal about how we learn and grow as a country, society, and species. I definitely recommend it.

While I enjoyed the historical sketches of Detroit and NYC, I found his theory of "consumer cities" and the elevation of rich people in general offensive. Glaeser sees workers and poor people as only another renewable resource that bond traders and politicians can move around like chess pieces to create a product. He obviously sees the benefits and success of urban landscapes in a way few others have dared to take on: cities as a connective social mechanism that produced engineering marvels and artistic genius. I really appreciate the criticism of sprawl and urban mismanagement that has been so curiously prevalent in most of my lifetime. As resources decline and cities condense back to their core, I hope both city and rural people can value cities again as a resource for adaptability and innovation. I only wish Glaeser could move outside his bubble of intellectual elites and value public education and unionism as much as he loves wall street innovation and fast trains.

A terrific listen! Really made me reconsider my views about the city, both as a place to live and a place to invest. The book flows well, is highly researched, and easy to understand. I can't recommend it enough

I heard about this book from "Good Economics for Hard Times". A strong case for greatness of cities. The author covers all his bases and takes time to discuss opposing views. His idea that "The Lorax" is anti-city is misplaced though. It's more about unnecessary consumption. That was my only problem with this book.