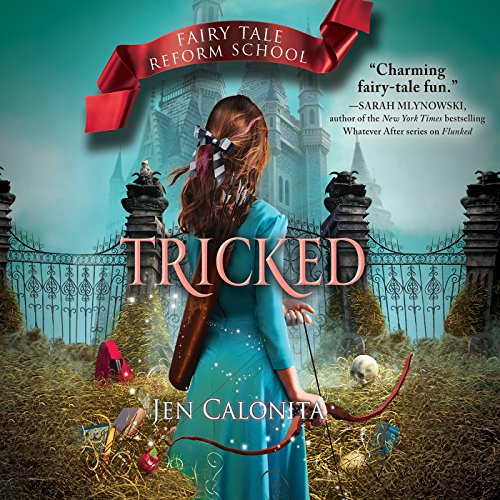 By: Jen Calonita
Narrated by: Kristin Condon
Try for $0.00

Times are changing at Fairy Tale Reform School. At least that's what Gilly's heard. Rumor is that notorious trickster Rumpelstiltskin has taken over management from Headmistress Flora, and he's locked down the school tighter than the Pied Piper's pants. Not that this news concerns Gilly - she's been released from FTRS and is now suffering through attending Jack of All Trades School, where she gets to learn about different kinds of shoe leather and ways to measure feet (truly riveting stuff!). But when Gilly's little sister, Anna, gets whisked off to FTRS (thanks to her troublemaking new friends, Hansel and Gretel), Gilly knows she's got to get Anna out of there and that there's only one way to do it: get herself thrown back in.

What listeners say about Tricked

I loved all the amazing performance of the story and it was very well expect. It had me hooked from 5 seconds in and I now have all the books in my library!

Please don't go off on your own to save the world. Please consult with your friends first; and ask Jen to give adults a break - some of them can be useful in life.

I just love this chapter series and can’t stop reading each book! It’s in captivating and magical. There’s non-stop adventure!

the narrator made everyone sound like a valley girl. there was not a lot of distraction between characters. I'll read the book on the next one.

so another great book for fairy tale reform school

started reading fairy tale reform school because I thought that it would be a quick and easy book never thought that I would get so caught up in this book that I fell in love with it. the thing Jillian cobbler is only 12 years old she has a lot to learn like any hero in training you have to remember your friends help you out and sidekicks are a thing of the past. I really hope they make another book of this cuz they leave you hanging on where everyone's going.