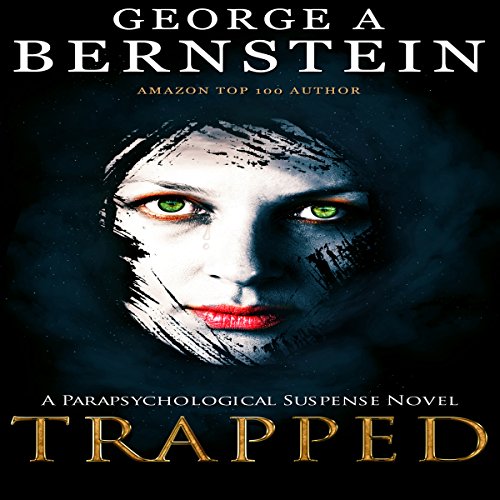 By: George A. Bernstein
Narrated by: Mary Kootsikas
Length: 10 hrs and 4 mins
Categories: Mysteries & Thrillers, Suspense
4 out of 5 stars 4.1 (16 ratings)

By: George A. Bernstein
Narrated by: Mary Kootsikas

The darkness is still, silent. Jackee Maren's heart pounds, reverberating through her body as fear sears her veins. Someone's coming. No way out. This time they will kill me. Her breath is short, her chest burns. Must run. Faster. Faster! Her eyes fly open, her heart still racing with blinding fear. Jackee breathes deeply with relief and stares at the ceiling desperately trying to calm herself. The same dream. Something, someone is watching...and waiting. A tragic car accident leaves beautiful, vibrant Jackee Maren completely paralyzed, able to move only her eyes.

Jackee's husband, Phil, is devastated and her two young boys are left with nothing but a shell for a mother, but still, Jackee senses the foreboding of an evil presence and knows time is short. Slowly, Jackee learns to communicate with her physical therapist, Kevin, by blinking her eyes. As evidence comes to light that her car accident was no accident, Jackee knows she must expose the person who wants her dead before they get a second chance.

While Jackee works to put all the clues together, she discovers she has the ability to sense the thoughts of others, but she hides this talent from everyone but her sons, not knowing who she can trust. By actively exercising her new psychic ability, Jackee finally learns who masterminded the accident but feels helpless to stop them from trying to kill her again. Slowly a plan forms to not only ensure her boys are safe forever, but to exact revenge on her would-be murderer. Jackee vows not to rest until this killer understands what it is to be trapped!


This book is a page turner. The author provides an excellent description of the syndrome and then weaves a family drama around it. The characters are boldly drawn. It is hard to pause so I keep listening to the audiobook.

This audiobook has a unique story,. I found myself sucked into the story from page one. I was eager to know what happens next. There were parts I figured out but at the same time, parts I did not. It has its twist and turn.

This story is really well constructed. You have a complex, if extremely naïve, main character in Jackee, who survives not one but four attempts on her life to solve the mystery of who wants her dead so badly! And two of the attempts were after she was completely paralyzed and could only move her eyes. Jackee is an heiress with a devoted husband and two small boys, Malcolm and Brian. One day Jackee is in a horrible car accident. The police have some questions but Jackee doesn’t think very much about it. She wonders why her busy executive husband is more distant than usual but puts it out of her mind.

When Jackee goes in for reconstructive surgery and comes out totally paralyzed, she begins to have some suspicions but still doesn’t want to think about it. When a third attempt is made on her life, she can no longer ignore the obvious and must make plans for not only her own safety but also for the safety of her little boys.

Soon after Jackee finally accepts that someone is trying to kill her, she discovers that she can tap into peoples’ feelings and can speak to her sons with her mind. She attempts to shield her sons the best she can using this form of communication but her only ally in this horrible situation is her live-in physical therapist, Kevin, who devises a Morse code type of communication using her ability to blink her eyes. He becomes her confidant and shields her from the callousness of her now blatantly hostile and inconsiderate husband.

Things get interesting when Jackee becomes entangled with the sexual happenings in her house. At first just maddening, the activity slowly (and I do mean slowly) allows Jackee an avenue of influence in her dire situation. This is my only real complaint with this book. You are subjected to Jackee’s sensations during sex again and again…and again throughout this book. It is integral to the storyline, I get it, but enough is enough. It began to seem like erotica or soft porn. Anyway, once Jackee figures out she can impact the people around her with her mind, a solution to her dilemma and a way to achieve retribution takes shape in her mind. Time is working against her, though. Will Jackee have time to complete her plan before one of the attempts on her life succeeds or her own body gives out on her?

I really enjoyed the narration by Mary Kootsikas. She captured the thoughts and turmoil in Jackee perfectly and performed the other voices admirably. The only voice I did not care for was the voice of Kevin. This physically hulking, yet intelligent and sensitive hero deserved a better performance and voice than the one given to him in this narration. It did not ruin the book but it did detract a little from my enjoyment of the otherwise superb recounting of this suspenseful listen.

Don't you wish you could read minds.

First things first. "This review copy audiobook was provided by the author, narrator, or publisher at no cost."

I've listened to a lot of mind books and if you stay with this book, it won't disappoint you. Just ignore the brain farts as to color of eyes and blow that off. I know copy editors have a ton to do in a short amount of time and will miss certain things. I chalk this up to that.

This girl has nine lives it seems. 4 attempts at killing her. All failed. And the sex, the sex, the sex and the sex. Just a little to much for me so skimmed over a lot of that stuff. Content was good and it took you into the mind of a person that could not talk.

I look forward to more from this author to see how they progress.

I absolutely loved this book. I think it may be one of my new favorites. I was so impressed by the wonderfully developed plot. I became so emotionally invested in the characters. I couldn't wait to find out what happened to the main character's cheating murderous husband. The love making scenes described here were so elegantly written. There was the perfect mixture of suspense/thriller/action/romance all intertwined. The narrator did an amazing job bringing the different characters to life and making me feel what they (especially the paralyzed main character , Jackie) felt. Would definitely recommend reading this to anyone.

I really couldn't read all of this book.The narration by Mary Kootsikas was next to terrible.The book was WAY too long, mostly full of unwanted views of sexual encounters.I was provided this book free by the author, narrator or publisher.

BOOK REVIEW.......
The story was interesting but the narrator ruins it.

NARRATOR REVIEW......
The narrator is awful !!!! She made it hard to listen to the entire book. I usually start and finish a book the same day but I kept putting this book down after 10 - 15 minutes of listening to it. It wasn't the story though it was the narrators voice.

Kept me glued till the end! Very well written!!!

If you could sum up Trapped in three words, what would they be?

Strong, Deep Performance with great cadence in the voice.

This is one of those books you can't put down.
I thought for sure Jackie would live I was sad when she died. How could she so easily let her husbands mistress adopt her children? How could she so easily let her husband divorce and marry his mistress? How could she just give up? After all she fought to gain to just give up? Wow she got her revenge and she...sorry I can't give up the ending. I loved this if I could rate a 10 I would.
I received this free for an honest review from the author or narrator.

A Must Have... Excellent Thriller!!!

Extraordinarily well written, the characters are so multidimensional that they essentially leap out from every page. I had to remind myself that, after getting lost in these books for hours, the characters weren't real! I was so immersed in the world of Trapped that I had to force myself to come back to reality and put the book down from time to time. The story line is fantastic and kept me on the edge of my seat at all times. Currently suffering from "finishers remorse," but looking forward to more incredible books from this author.

"I was provided this audio book at no charge by the narrator in exchange for an unbiased review via AudiobookBoom dot com".