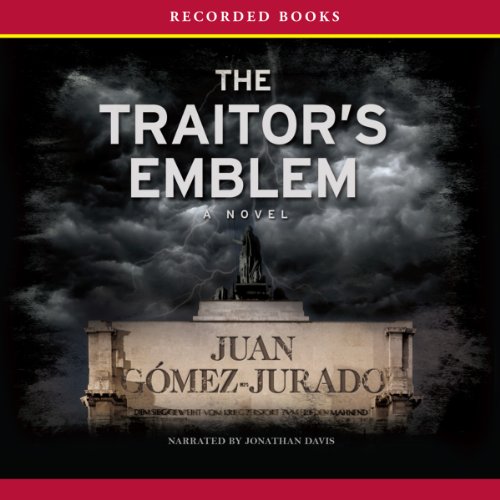 Juan Gómez Jurado is the award-winning and international bestselling author of The Moses Expedition. Here Gómez-Jurado pens an epic thriller sure to win him an expansive fan base. In 1940, a sea captain rescues a group of German castaways near the Strait of Gibraltar. In return for their safe passage to Portugal, one of the Germans gives the captain a goldencrusted emblem. Decades later, the captain��s son learns of the emblem’s history and its link to one man’s quest for vengeance that began in 1919.

I purchased this book solely because Jonathan Davis is the narator. He's my favorite...and I thought, since it has been weeks since the last time I heard hi read a book for me so i gave this a try.

I was not disappointed on the story, love it....

I was attracted to this novel by its setting - Munich during the time of the Weimar Republic and the rise of the Nazis.
I won't give a blow-by-blow account of the plot;I don`t like to give away too much as it spoils the enjoyment for the reader. The tale is set in motion by the mystery of a strange medal-like object which a Spanish captain passes on to his son; only in 2002 is the origin of the emblem finally explained.
Gómez-Jurado skilfully uses the backdrop of an economically ruined Germany with all its despair, political turmoil, anger, violence and decadence to tell his back-story of Paul Reiner`s search for the truth about his father's death and the reasons for the bitter treatment he and his mother endure working as servants in the home of their aristocratic, but bankrupt relatives. After an altercation with one thuggish cousin and the suicide of another, Paul learns that a dark secret has been kept from him; meanwhile mother and son are forced to leave and fend for themselves...

9 of 9 people found this review helpful

I would absolutely recommend this book to friends.

Like real life, not every outcome of every event is perfect which makes this story more real and more suspenseful.

The narrator did great with all the characters.

The rescue and lack of communication between the rescuer and the rescued at the start is the hook that made me interested.

I was enjoying the story until the recording broke in ch 33. It won't play past that it let me jump over it.
I've re-downloaded it twice.