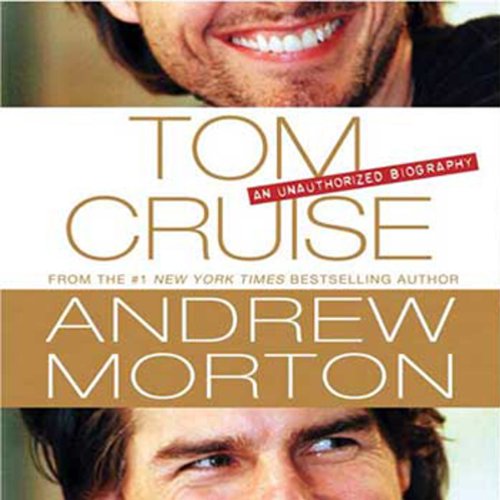 By: Andrew Morton
Narrated by: John Hinch
Try for $0.00

In 2006, Forbes magazine ranked Tom Cruise as the most powerful celebrity in the world. With three Golden Globe awards, three Academy Award nominations, and 27 films with an average box office gross of nearly $100 million, People magazine's choice for the "Sexiest Man Alive" in 1990 is unquestionably one of the biggest movie stars of our time.

He has also become one of the most controversial, for his outspoken championship of Scientology, for his criticism of Brooke Shields for turning to the "Nazi science" of psychiatry for help with postpartum depression, and for the time in 2005 when he jumped on Oprah Winfrey's couch proclaiming his love for Katie Holmes. But for all the headlines and the rumors swirling around him, the real Tom Cruise has remained surprisingly hidden: until now.

For two years, acclaimed investigative journalist Andrew Morton has been uncovering the true story of Tom Cruise: from his days as bullied "little Tommy Mapother", to his early stardom, to his romances, and his increasingly public involvement in the world of Scientology. With new sources and exclusive interviews, Morton brings us never-heard revelations about the private, sometimes shocking world of Tom Cruise.

What listeners say about Tom Cruise

Although I have idolized Tom Cruise for decades, and have even published numerous commentaries defending his antics over the years, I recommend that people take a look at this excellent biography.

Presuming that Andrew Morton, his publisher, and attorneys did their homework, I learned many disturbing things about Cruise and Scientology for the first time. I also enjoyed many of the tidbits that Morton provides from at least one Cruise family member, teachers, girlfriends, and others.

Although the book is very tough on both Cruise and Scientology, it is a must for any die-hard Cruise fan or anyone interested in getting the inside scoop about Scientology.

I would recommend this book to anybody who is interested in Cruise's involvement in Scientology. This is the reason I purchased it.

I continued to be appalled at the abuses and teaching of Scientology. and the bizarre behavior of Cruise.

If you have read "Going Clear" and want to find out more of why Cruise thinks the way he does, and behaves in such an arrogant manner, this is a good read.

This book is EXACTLY in accordance with what I’ve been saying about Scientology infiltrating the government and taking over Hollywood. Thank you for writing this Andrew! You’re my hero. I’ve been stalked and harassed by Scn for NINE YEARS. And this proves my story - My So Called “Crazy” Life And hire’s there tried to rule and destroy my life.

Good book but lacking in detail

There are lots of revealing stories here about Cruise and Scientology but I think there is much more and felt that there were huge gaps in the narrative.

Are you sure the prononciation is correct?..

That’s not how you say “Miscavige”! Normally I feel like it’s fair to be all “tomatO, tomAto”, but I have heard enough people pronounce it to know this is waaaay off. The main thing is that it sounds humorous, and almost mocking. Otherwise, a pretty concise bio.

Extremely insightful and accurate according to ex-scientologists that's read this. Definitely a must read! Easy-read!

Let me first say. I am it a Tom Cruise fan. I think he an amazing actor. But as a person ahhhhh I think we don't see things the same way in life. It was an interesting insight to whom he is as an actor, friend and husband. Good read

If you are going to narrate a book or produce an audio book, learn how to pronounce the names you are speaking. David Miscavige's name is butchered through the entire book. When you butcher the name of someone so central to the story, it diminishes the credibility of the book. I am not a Scientologist but found the obvious error really distracting.

I am a fan of Andrew Morton's and was looking forward to this book. The whole thing seems strangely uninteresting, and it never made me feel as though I learned anything about Tom Cruise. I thought the writing was disjointed. It doesn't even mention that Tom and Nicole were divorcing, and then all of the sudden mentions that they were divorced? Not worth the time.

It was good to learn some things about this powerful talent ... but someday I hope to find a more thorough account of his life now that I got a taste of it.