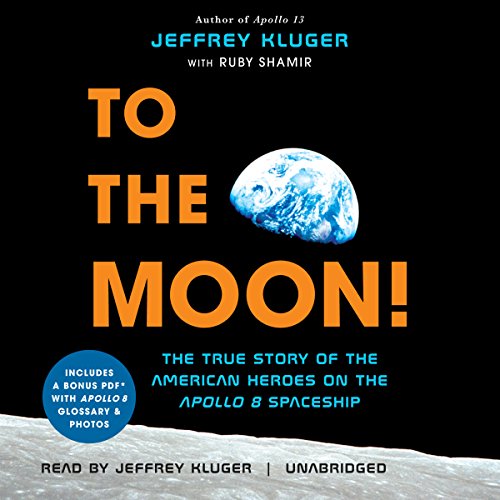 The exciting and inspiring true story of Apollo 8, the first crewed spaceship to break free of the Earth's orbit and reach the moon, by the best-selling author of Apollo 13.

What's more exciting that spaceships and astronauts? How about a spaceship carrying the first astronauts ever to see the moon first-hand - on Christmas!

The year was 1968, and the American people were still reeling from the spacecraft fire that killed the Apollo 1 crew a year earlier. On top of that, there were rumors that the Russian cosmonauts were getting ready to fly around the moon. NASA realized that they needed to take a bold step - and that they needed to take it now. They wanted to win the space race against Russia and hold true to President Kennedy's promise to put a man on the moon by the end of the decade. So in a risky move, a few days before Christmas of that year, they sent Frank Borman, Jim Lovell, and Bill Anders to the moon!

This book about the exciting and inspiring true story of Apollo 8, the first crewed spaceship to break free of Earth's orbit and reach the moon, tells the story of these three brave men, the frantic rush to get their rocket ready, and the journey that gave the American people - and the world - a new look at the planet we live on and the corner of space we inhabit.

Filled with the science and training required to put a person into space, and every detail of what it's like to live in a spaceship for days on end (including what happens when astronauts need to use the bathroom), this book is sure to leave kids clamoring for a spot on the next mission to outer space.

"[F]ascinating details about eating, sleeping, and taking care of business while in space will keep readers turning pages [and the] epilogue is a romantic ode to the space race with reminders of its remarkable legacy." (Kirkus Reviews)

"Kluger tells the main story with a good balance of technological details and human-interest narratives.... An engaging, informative account of the Apollo 8 mission." (Booklist)

"[A]n appealing and informative account of the first mission to circle the moon [that] will appeal to those with a keen interest in America's space program who have enjoyed other books on the topic, such as Andrew Chaikin's Mission Control, This Is Apollo: The Story of the First Voyages to the Moon." (School Library Journal)

What listeners say about To the Moon!

A full, detailed description of one of mankind's greatest adventures . Told in a measured style by the author.

I loved listening to the detail around the Apollo and Gemini missions. Well performed and difficult to stop listening, ended up driving to places to carry on listening in the car!

Superb record of an incredible piece of human hist

A brilliant, engaging story for anyone interested in the history of the Apollo space program