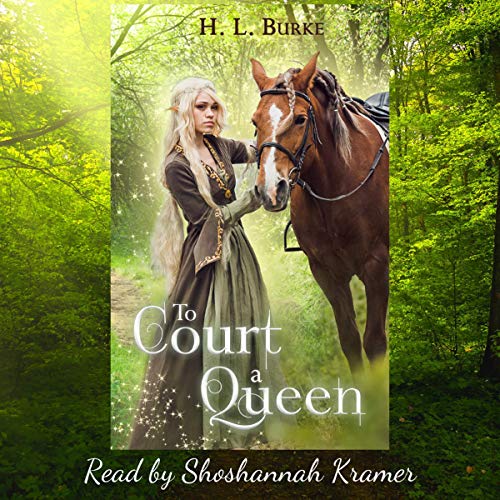 To Court a Queen

He doesn't want to get married, but he wants to be a frog even less. Knight errant Devin takes a shortcut through the woods, only to be captured by fairy forces. The fairy queen has run out of breathing males to fight for her hand, and Devin, while not ideal fairy stock, is breathing - for now.

Telling a vain fairy queen you'd rather not be her one true love is a ticket to life on a lily pad, so the knight agrees to face three challenges to win Queen Agalea's hand. When a clever servant girl offers to help him navigate the trials in order to stop the constant bloodshed of the courtship ritual, Devin jumps at the chance. However, as he balances "flirting" with his "beloved" and overcoming tasks specifically designed to kill him, he finds his heart drawn to his new partner in survival.

What listeners say about To Court a Queen

This story was okay. I wouldn’t say there was anything ‘wow’ about it. It’s like I had a job to do. I was the one to ask for a code because the cover caught my eye, so I had to listen to it. I did that and I’m now reviewing. I just feel that magical connection to any of the characters. The storytelling aspect just fell flat.

The narrator did an all right job. I don’t know if it was a mistake in the story or if the narrator just mispronounced the word, but there was a part when she said something like “Fleshing, Savine bent and reclaimed her tray,” instead of saying “Blushing.” Overall, I think with more practice, she’ll get better at least in the male voice category.

This will probably seem strange but I can’t help but think that faeries wouldn’t be using the phrase “god only knows…” Is it just me? Or referring to those they intend to marry as their fiancé as opposed to their betrothed…I mean there are knights still, so the story isn’t taking place in a current time.

I get the queen was the queen, the number one in charge, but given she was killing all the males in her kingdom, you’d think her followers would have struck back and killed her. Yes, she had the garden of statue, those that had tried to do whatever to her in the past, but still. Were there no other magical creatures that could have helped?

I wasn’t a fan of the ending. It was too simple. Like the queen is horrible and does all this bad stuff and bam! She’s no longer. It was just too neat and tidy for my liking.

It’s not for me, but worth a listen for YA romance

•audiobook•
“It’s not for me, but worth more than 1 star”

A teen YA romance

Beautiful cover, but the world building wasn’t as attractive and I never really liked nor cared for the characters. Although I truly disliked the queen, she came across more like the stereotypical high school cheerleader than a mystical leader of Fey.
The characters acted younger than their ‘adult’ ages and Dev’s worldly womanizing experiences.

I know the last review I wrote for this author was less than flattering and I was going to give up on her, but I loved sooo many of her books in the past and hoped she’d reconnect to that talent.

TO COURT A QUEEN A FROG PRINCE

Another wonderful telling FROm H.L. Burke!
I really enjoyed how the hero and the heroine slowly came to care and protect the other!
Their banter is very amusing to listen to!
How about a beauty and the beast retelling next!

This is a romantic story set in the court of a wicked but beautiful fairy queen. The love scenes are very detailed, but relatively clean (the only explicit action is kissing). The fantastic elements, while not my historic favorites, are clever and consistent. The dialog is witty. My only criticisms are that a couple of the words seemed off-genre, I disliked one or two of the names, and it could have probably been better done if it had been slightly longer.

I loved both the ebook and now the audio book. The narrator did Sevein's voice perfectly.

I thought this was a fun clean fantasy romance geared for the YA crowd. It's a story of a narcissistic Fairy Queen that is fast running out of prospects for a mate due to her 3 quests that they must pass first and should they fail then they must die..... the fairy population is almost out of men and they are searching for other candidates when they trap a human knight. This story has a fun little journey that you get to travel with the knight as he tries to survive the trials, plan his escape from the insane Fairy Queen, and fall for another girl without letting the Queen know of his distraction. Although it was a little predictable, the story was still well written and a fun read. I would place it as a young adult read as it does get into some heavy romance with a couple places that were almost sex scenes, but otherwise a pretty clean read. The narrator does a great job and adds to the fun of the story.

This is a humorous story! This is for those that want to listen to a book with plenty of humour and not taxing on the brain.
I liked it and would recommend it.

I loved the cover picture! The story is unique and funny. I don’t think I’ve read anything quite like this before. The story is quite a bit different than what I had expected. The fairy queen is totally insane! She is putting man through three crazy challenges wether they want it or not!

Narration was good and brought the story to life.

The story develops at a good pace with some suspense, action, humor, and a touch of romance. I did think that the characters were a bit immature but perhaps that is what made it outrageously funny at times.

Here, human being Devin, who is a knight, takes a short cut home and is captured by the fairies for their Queen. Devin must now pass three tests - under penalty of death - and if he passes, he will be able to marry the Queen. Bad news - no man has ever passed all three of the tests and so many have tried [both voluntarily and forced] that they have run out of men. However, Devin has a secret weapon in a servant girl named Sevaine - as long as he listens to her, he might make it out alive.

This is a charming and very enjoyable fairytale. It's perfect for the entire family - there's action, a lot of heart, suspense and good humor. It's engaging from the beginning to the end! I absolutely loved it!

The narrator was perfect for this story - she had various voices for the different characters. She was able to capture the wit and, at times, the tension of the story.

An original fairytale using the three trials trope. The protagonist is a snarky rogue who has to face three trials to win the hand of the fairy Queen. One problem he doesn't want to marry her.

The narrator perfectly captures the wit and snark of the male lead. She also varies her voice enough to make the rest of the characters distinct.

overall I loved this stand alone fairytale from one of my favorite authors.

A good listen with in depth characters and a captivating story. If u like tales fae and magic then u enjoy this.
Highly recommended