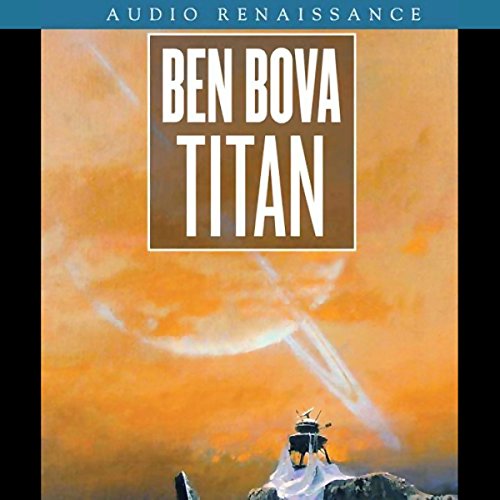 Master storyteller Ben Bova continues his multi-volume "Grand Tour" saga chronicling humanity's exploration of near space with Titan, a fast-paced thriller focused on the first manned mission to the Solar System's most intriguing world. Skillfully blending high drama, passionate characters, and daring speculation with the latest discoveries from the current Cassini/Huygens probe of Saturn's moon, Bova has crafted a heart-stopping tale of epic adventure on mankind's next frontier.

The gigantic colony ship Goddard has at last made orbit around the ringed planet Saturn, carrying a volatile population of more than 10,000 dissidents, rebels, extremists, and visionaries seeking a new life among the stars. Chief scientist Edouard Urbain's avowed mission is to study the enigmatic moon called Titan, which offers the tantalizing possibility that life may exist amid its windswept islands and chill black seas.

But when the exploration vessel Titan Alpha mysteriously fails after reaching the moon's surface, long buried tensions surface among the colonists. Torn by political intrigue, suspicious accidents, and an awesome discovery that could threaten human space exploration, a handful of courageous men and women must fight for the survival of their colony, and the destiny of the human race.

What listeners say about Titan

The voice talents were exceptional. I've heard them before reading other books and was impressed. However, this book was so awful, even they couldn't save it. It was painful just getting through to the end.

Bova tries to intersperse some political intrigue, so of course the women are pitted against the men in a women's rights issue. Did the "women's issue" have to be "having babies?" Talk about cliche! Bova also expresses his complete lack of understanding about astronauts & mission planning. A pilot who forgets to put on her space suit for a flight? Please!

The characters in this book were all so alike that I couldn't tell who was with whom, or which character was speaking because they all thought the same way. I'd like to say the characters were 2 dimensional, but juvenile is more like it. The robot is the only interesting or stable character in the entire book.

I guess I grew up reading Ben Bova over the years (the Dueling Machine early on through Mars and Return to Mars later on), so I've always liked his slow paced, realistic writing style that puts character development in front of action.

Titan is as good as any of those books and very well narrated, too. I saw there seemed a lot of negative reviews, but Ben Bova doesn't write pulp fiction. He writes hard science fiction.

This was a good book.

One of my Favorite Books Ever

I've listened to this audiobook four times. It's a most excellent story with great action, believable characters, good dialog, and marvelous narration by some of the best readers. I have recommended this book to other readers and will continue to do so.

I like sci-fi, but this was more like Dallas in Space than anything else. I've never read Bova before, but I was expecting more from the futuristic space genre than this. The narration is almost unbearable. Four different readers switching off, mostly depending on who's point-of-view is being expressed. They all "performed" replete with accents that were inconsistent depending on who was reading. The story lost me about 1/4 in but I stayed with it almost until the end when I realized it was time to move on.

Couldn't even finish it.

If this is one of Ben Bova's best works, I will skip the rest. I couldn't even get halfway through this book, I got so fed-up with all the focus on who was dating whom and who was wearing what to the ball and how much weight whomever had lost and how. At least the first half of the book is severly lacking in sci-fi elements. I got to the point where I didn't even care about the probe anymore, I was so sick of wading through all the high-school drama. Reads like Cosmopolitan magazine in space.

I enjoyed this book. There are others that I like better but like all authors they have to add politics into the mix sometimes. I prefer the just plane space science fiction most.

I consider Ben Bova's Mars to be a classic. It was one of the rare science fiction novels that does a good job of getting the science right. The story was engaging and believable. It really made you feel like you were there, exploring the surface of another world that is wonderfully alien and fundamentally hostile to human life. That, of course, is the main reason to buy a book in a series about exploration of our solar system.

Unfortunately, the Grand Tour series looks, to me, like a classic example of a very talented author that seems to have lost interest in a series, but keeps writing new books because they sell well and the publisher wants him to. More specifically, Bova seems to realize that he can't just keep re-telling the story of Mars on each planet in the solar system but he seems to believe that readers will only be interested in planetary exploration stories if life (particularly evidence of intelligent life) is found. Realizing that he can't tell that same story 15+ times, he quickly began to tell stories that are more about the politics of space exploration than anything else. As the series wears on, the space exploration begins to feel more and more like an afterthought. One can almost see him getting well into the second half of the novel and thinking, Oh yeah...I guess I need to have them spend a little bit of time exploring [insert title of book here].

That problem reaches ludicrous proportions in the book Titan. When I buy a book entitled Titan, in a series that is about solar system exploration, I don't think it is unreasonable to expect to see humans...you know...EXPLORING TITAN. That literally never happens in this book. One guy VERY briefly goes down to Titan, near the end of the book, and his purpose was not to explore. In my opinion, this is the most deceptive book title I have ever seen.

It's a real shame, because there are countless interesting stories about solar system exploration that could have been told -- that don't involve finding life on every planet and moon in the solar system. These are entire WORLDS that differ from our own in amazing, fascinating and wonderful ways. There was no need to turn the series into a political soap opera in space.

Sadly, this will be the last Ben Bova book I buy, unless I see compelling evidence that he switches the focus back to true space exploration.

consistent with my opinion of each of the novels in this series.... I just am not digging the multiple voices for individual characters.

Bova wrote this and many other books as excuses for taking the real scientific data for the planets and giving it to us in the form of a story... it is interesting insofar as you like astronomy and planetary physics... as a story it is pretty much fluff... some angsty characters, a mysterious robot gone awol... and a dash of interstellar politics. Nothing dumb, nothing offensive, but also nothing to write home about. The readers on the other hand, are terrible... sounding like a bunch of WASPy actors trying to play ethnic types. The dialects come and go, depending on how tired the readers are, and they try so hard to inflect the voices with character and pizazz that they do a disservice to the simplicity of the tale. Read this if you like hard sci-fi stories about terraforming/space exploration, but don't expect Red Mars (Robinson). It's no where near that complex.

If you could sum up Titan in three words, what would they be?

loved it. loved the last chapter. such fervor and intensity. narrators were great. love Stefan.