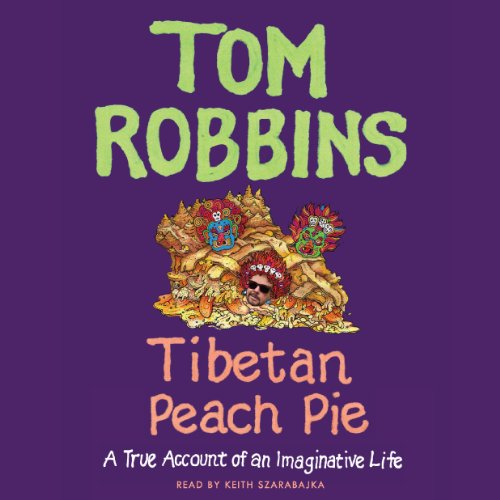 By: Tom Robbins
Narrated by: Keith Szarabajka
Try for $0.00

Internationally best-selling novelist and American icon Tom Robbins delivers the long-awaited tale of his wild life and times, both at home and around the globe.

Tom Robbins’ warm, wise, and wonderfully weird novels - including Still Life With Woodpecker, Jitterbug Perfume, and Fierce Invalids Home From Hot Climates - provide an entryway into the frontier of his singular imagination. Madcap but sincere, pulsating with strong social and philosophical undercurrents, his irreverent classics have introduced countless fans to natural born hitchhiking cowgirls, born-again monkeys, a philosophizing can of beans, exiled royalty, and problematic redheads.

In Tibetan Peach Pie, Robbins turns that unparalleled literary sensibility inward, stitching together stories of his unconventional life, from his Appalachian childhood to his globetrotting adventures - told in his unique voice that combines the sweet and sly, the spiritual and earthy. The grandchild of Baptist preachers, Robbins would become over the course of half a century a poet-interruptus, an air force weatherman, a radio DJ, an art-critic-turned-psychedelic-journeyman, a world-famous novelist, and a counter-culture hero, leading a life as unlikely, magical, and bizarre as those of his quixotic characters.

Robbins offers intimate snapshots of Appalachia during the Great Depression, the West Coast during the '60s psychedelic revolution, international roving before homeland security monitored our travels, and New York publishing when it still relied on trees. Written with the big-hearted comedy and mesmerizing linguistic invention for which he is known, Tibetan Peach Pie is an invitation into the private world of a literary legend.

This isn't a book, it's a complete experience

Tom Robbins has been my favorite author since the early 90's with Woodpecker. I've read all of his novels and wished that he would write faster and never age so that his novels would keep coming.
I didn't however, follow his life. I didn't even know in which order he wrote his books, I didn't really know anything about him.
This book is a treasure. It's a glimpse into an amazing life, but more importantly, it's written by the master.
The minute I finished it, I started it over. There are tiny moments throughout the book that made me stop and say "oh wait, that was amazing," but then he'd moved on to something funny, or shocking, or mind-bending. I had to listen again.
Robbins' life is super colorful and super interesting. His views on everything from love to religion are just as interesting. But none of that matters as much as how it is all written down. His prose, his use of language is like no one else and it's just, well, I don't have the vocabulary to speak highly enough. He's awesome. He's spoiled me for any other author. He has no equal.

The narrator was perfect, just perfect.

I wish someone would put all of Robbins books on Audible.

This Is the Story of Tommy Rotten

Tommy Rotten. That's what his mother called him -- half affectionately and half truthfully -- when he was a kid in rural North Carolina during the Great Depression. And gonzo novelist Tom Robbins certainly made a lifelong effort to live up to his childhood nickname -- not literally rotten, but affectionately, iconoclastically rotten. And while living the life of Tommy Rotten, Robbins (amazingly) started writing at an early age and pursued a career as a writer (journalist) from the start.

If you like the novels of Tom Robbins, you will love his "this is not my memoir" memoir. Recounting anecdotes from his colorful life, Robbins clues his readers into the currents and events that shaped his life and career, ultimately as a beloved author. Hed does so in a format that falls outside the bounds of a conventional memoir or autobiography, in the same way he had consciously set about breaking the bounds of the traditional novel when he wrote his first book, the legendary Another Roadside Attraction (Audible, PLEASE come out with an audio version of ARA ASAP!).

The biographical details are welcome, often juicy. But what his fandom will appreciate most are a) the background on how his novels came to be written and published and popular, and b) his boundless talent for stringing words into sentences, paragraphs, and chapters. Many of his anecdotes are structured to set up a punch line, and while some of those punches miss the mark, his use of language is always awe-inspiring (and to a wannabe writer like me, the cause of endless envy).

Keith Szarabajka sounds so much like Robbins, he is the perfect narrator. He is one of those actors whose face you recognize from all of his character roles in TV shows and movies, and he is a prolific voice actor whose voice you recognize more than his tongue twister of a name. He also read the audio version of one of Robbins's novels, among his dozens of audiobook credits. Would love to hear him do ARA (hint hint, Audible!).

A man with a thousand ways to describe blue. I crave his language.

some times, 15 characters is too much.

One of the best books I have come across, I am such a lover of Robbins work and this didn’t disappoint. His use of personification, his romanticism, the whole book amazing from start to finish. I cried when it finished.
I also will be listening to other books by the narrator since he too, was perfection.

I used to love Robbins, now I know he's an egotistical misogynist, great. not recommended.

A great way to get to feel you know Tom Robbins

A nice way to get a better sense of who Robbins is and something about his background. His colorful imagination shines through

I had never read a Robbins book, but I thoroughly enjoyed this memoir. Whether or not you like what he has to say, his writing is a tsunami of simile, a monsoon of metaphor, with witty bon mots bursting forth like slick new-born puppies or ... well, you get the picture.

Not enough to tell

Listening to this book was wonderful, except for the author's really, really indulgent view of a not-so-incredible past. I think his life would be a better read had another author tackled it. Reading about Robbins' small experiments with drugs etc...pales in comparison to the extensive (and documented) explorations of his contemporaries, folks like Burroughs and Hunter S. Thompson. So while I am a long-time fan of his work (and continue to be) this book falls short of the mark for the simple reason that I imagine it is very hard to write about oneself.

I enjoyed this narration, I did not feel a disconnect between the man and the story, as if Tom Robbins could have been reading to me himself.

This was a real treat. If you’re a fan of his work, you’ll not be disappointed by this clever contemplation of his own life. Thanks, Tom, for always leaving me with a smile.

As with all Tom Robbins novels this was full of wisdom, wonder and mad magic. Brilliantly narrated, sweet, smart and incredibly funny.

Highly engaging and richly entertaining story with excellent narration (what a voice!) by Keith Szarabajka

love this book and the author can do no wrong. funny poinent, profound, all wrapped up in a prose that is so stunningly sharp it will blow your mind.

An insight into the mind of Tom Robbins

Fascinating though not enough detail on the writing of any of his books beyond the first two.

So easy to keep listening that it finished before I was ready to stop absorbing the stories and piecing together a bigger picture of the man behind the words I've admired for over 20 years.

great to listen too. so much imagination!