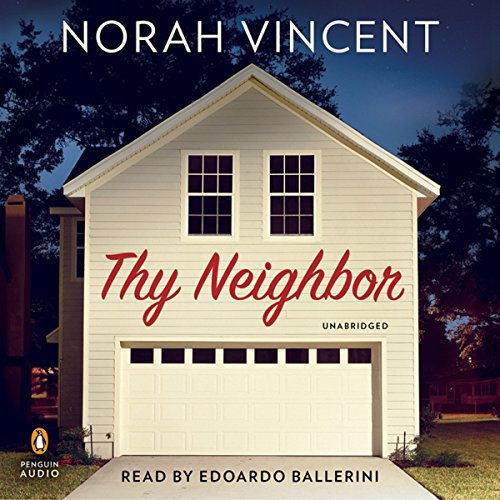 From the New York Times best-selling author comes a first novel as spellbinding as her acclaimed nonfiction.

At 34, Nick Walsh is a broken, deeply cynical man. Since the violent deaths of his parents 13 years earlier, he has been living alone in his childhood home in the suburban Midwest, drinking, drugging, and debauching himself into oblivion. A measure of solace is provided by his newly found relationship with Monica, a mysterious woman who seems to harbor as many secrets as he does.

Obsessed with understanding the circumstances surrounding his parents' deaths and deranged by his relentless sorrow, Nick begins a campaign of spying on his neighbors via hidden cameras and microphones he has covertly installed in their houses. As he observes with amusement and disbelief all the strange, sad, and terrifying things that his neighbors do to themselves and to one another, and as he, in turn, learns that he is being stalked, he begins to slowly unravel the shocking truth about how and why his parents died.

At once unsettling and moving, humorous and horrifying, Thy Neighbor explores the nature of grief, the potential isolation of suburban life, and who we really are when we think no one is watching. What readers and critics have admired in Norah Vincent's nonfiction is completely unleashed in this vivid and provocative novel.

Would you try another book from Norah Vincent and/or Edoardo Ballerini?

Ballerini is one of my favorite narrators so I thought I would try this book. Publishers summary sounded interesting. The story is well written but is very disturbing, depressing and at times sickening. Not what I was looking for.

Did Edoardo Ballerini do a good job differentiating all the characters? How?

One of my favorites narrators!

What character would you cut from Thy Neighbor?

I don't think there is a like able character anywhere in the story.

STOP LOOKING... SPEND YOUR CREDIT ON THIS ONE!!!

I’ve listened to many, many books which I have wanted to comment on however, I am not a master of words and feel inadequate to write a substantial review. But then I listen to a book like this and I tell myself screw it, just write something, anything, to let viewers know they won’t be wasting a credit by adding this to their library. You’ve already read the publisher's summary so you know what it is about. That is only a scratch on the surface of what you are in for with this book. And besides, it is worth a credit to hear the performance of Edoardo Ballerini who really is one of the best narrators on audible.

I tried. I really did. I made it all the way through the first download before I threw in the towel. This story could have been written so much better. Hours of listening to a whiney, profane, self-centered young man excuse his own abberant behavior while blaming his parents for making him that way is just too much. Granted, he endured more than most in his young life but many people have faced as much and more and have been decent, caring, productive human beings in spite of, or because of, what they went through growing up. This is a re-write of an old story line which falls way short of adequate. Considering what he had to work with, the narrator did a good job. There, I found something positive to say.

Incredible performance from Ballerini, hands down. The commitment, the depth, the attention to nuance, the delineation of character. Absolutely fantastic work.

The story was intriguing. Disturbing in the best possible way: it drew me in. Excellent writing as well. WELL DONE.

Does not live up to reviews

Have listened to this for three hours and still can't get into it. I see no 'plot' evolving. The performance is good, but so far the 'story' sucks. I regret wasting a credit on this book. It is nothing like I expected. A book like this should come with some sort of warning about its content. I guess other people might find the content amusing, I do not.

Balerini is great. The book is not.

Edoardo Balerini has narrated only a few books, and I have come to love his voice and his skills. If you'd like a better book to listen to with him narrating, try Beautiful Ruin. This book initially astounds us with brilliant writing, and what at first sounds like an unusual woman's feeling for a male protagonist. The gimmick is clever enough: he bugs the houses of a number of his neighbors, and videotapes their domestic lives. So, he gets to have a unique perspective on their private comings-and-goings. Some of this is amusing, although much of it is torment, better kept private. By the middle of the book it becomes clear that the book has no plot, and is entirely about relationships. I know it is not PC to call this chick lit, but there it is, nonetheless. I was bored by the middle of the book. Everyone has his tragedies, including the protagonist, whose father killed his mother and then turned the gun on himself. This history leads us to a tormented life, and, through the spying, to many other tormented lives. I did not expect this, particularly because Mr. Balerini is so witty and can be so much fun when given the proper material. The protagonist and his erstwhile girlfriend are people about whom we care nothing, as they are both thoroughly schizoid (isolated and incapable of functioning in relationships). After a while I found myself begging for some plot. Norah Vincent can write, but disguising her "hero" as a man does not disguise the nature of what she writes.

I liked this book overall. And the reader was amazing! The story was a tab predictable as it went along but for the most part enticing. It definitely would be a recommendation from me.

Sorry, I just did not like this book, it is full of dark sarcastic thinking. Kinda like Catcher in the Rye which I hated. I just don't like characters that think this way. And I don't appreciate authors who write as a tool to show us all how smart they are. The author is the mother of the main character Nick. There were just too many word embellishments, some that made no sense at all. Some actions that made no sense like when Nick kissed the neighbours son. I do not like to read about people that are as nasty, mean and negative as the characters in this book. I refuse to accept a world peopled by characters like this. If I must I will deny that world. This book did not entertain, it was just plain disturbing.

An okay storyline with great narration.

This book is okay. The story confuses you when you're first listening to it (or the second or third time through) . The narrator makes this book great just with his storytelling.