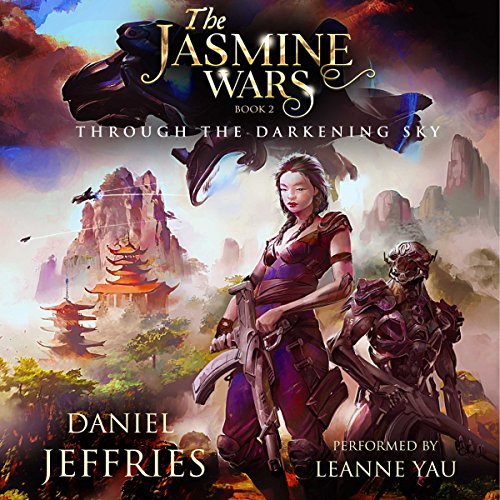 Through the Darkening Sky

By: Daniel Jeffries
Narrated by: Leanne Yau
Try for $0.00

Continue the epic saga of family, love, and war.

Across a century of chaos and upheaval, follow three generations of heroes who will change the face of China forever.

A young boy on the run from the Communists that murdered his family must survive in the harsh Tibetan wilderness.

A grandmother and leader of the underground railroad must face her dark past as a young revolutionary.

A brilliant but brash colonel races to uncover a shadowy conspiracy that threatens to tear the new republic apart.

When a Jasmine Revolution sweeps away the brutal Communist regime, China transforms into the world's first AI-driven direct democracy, ushering in a golden age of peace and prosperity unlike anything ever seen in its 5000-year history. Now when an economic shock brings terrorism and ultra-nationalism roaring back, the nation's favorite son, Colonel Ju-Long, races to uncover the traitors in his midst before his beloved country explodes into another devastating civil war.

But will long-buried family secrets mean it's already too late?

What listeners say about Through the Darkening Sky

Not really. I had tried the first book in this series earlier and had multiple issues with it. But I have a thing for good book covers and this book 2 has a great cover. The synopsis this time looked more interesting than the first and thus I decided to give this series another try. But alas, the book striked out this time too. The setting just didn't feel relatable and I didn't feel invested in the story or the fate of the protagonist. I powered through a large portion of the book, expecting that it would get interesting in the next chapter, but it never got to that for me. And thus, I can't honestly recommend it to my friends.

Would you recommend Through the Darkening Sky to your friends? Why or why not?

Err.. it's the same question. Amazon, fix your bots.

Would you listen to another book narrated by Leanne Yau?

Somehow the accent sounds Scottish / British, which doesn't really work for this book. It might work for British detective novels, in which case I'll be interested in listening to those books narrated by Leanne.

Another great book in this new series

I thought this was a brilliant follow up to the first book in the series. It kept the overall story ling going and had the same depth and character as the first. I also thought Leanne Yau did another great job narrating this book as she did book for book one. Definitely looking forward to the next book.

Writing
Building upon the solid foundation of the first book this is an epic part two, we get to see .more of the world and character their history and motivations. This is a book about politics, rebellion, war and where the line between freedom and safety should be, should people be allowed to make bad choices? The world is full of advanced tech from 3d printers to AI controlled robots. I think this would make a great setting for an RPG or computer game it clearly has a lot of detail and thought in every part of it.

As with the first book, The story moves back and forward along the timeline revealing the truth of past events bit by bit keeping you guess what is going to happen next almost like a mystery book, letting you try to figure out how and why things are happening or what facts you are missing if you want. If you have listened to the first book many of the things that happen will have more meaning to you. The characters are well thought out and have hidden depths that are slowly revealed.

Narration
Leanne Yau is equally as skilled with narrating the story, actions and events as with breathing life and personality into the characters giving each unique voice. The narration is still solid and even a little improved over the first book. One thing that people may or may not like is the echo effect from inner thoughts or mental communications

Overall
An epic part two, this book improves upon everything in the first book, from the narration to the quality of the writing. I would recommend listening to the first book before this one as it adds a lot of background to what is going on. I very much enjoyed the book and am looking forward to the next one.