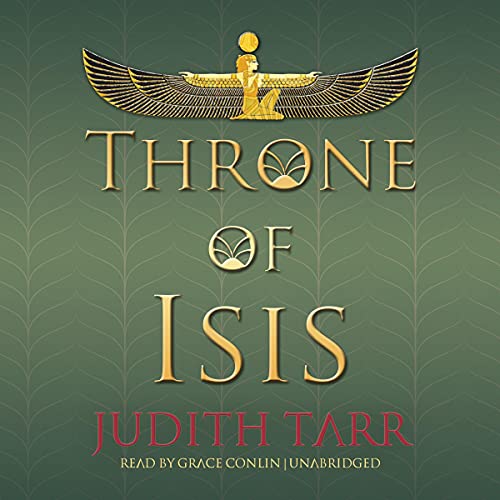 By: Judith Tarr
Narrated by: Grace Conlin
Try for $0.00

Cleopatra, Queen of Egypt, heir to the throne won by Alexander the Great: she was the most powerful woman of the ancient Mediterranean, and the only person standing between Rome and its dominion over the world. She was wife to Julius Caesar, and bore his only son. After his death she took Mark Antony, Caesar's greatest general, as lover and consort, and as her partner in a vast political enterprise. Together they strove to unite Egypt and Rome under one throne.

History tells of Cleopatra's war with Rome, her political skills and her devotion to Egypt. Shakespeare tells of the tragic love affair. But in Throne of Isis, Judith Tarr shows us an extraordinary woman wielding the power to which she was born. Here is the Cleopatra who took the throne of Egypt and held it despite Rome for nearly 30 years. This is the woman who spoke 12 languages, studied philosophy and arts, and could debate with the greatest scholars and orators of the age. Here is the woman who fell in love with a man she meant to use. And here is historical fiction at its best.

"Tarr weaves Rome and Alexandria, wars of conquest, pageantry and personality, earthly as well as supernatural powers together in a marvelously entertaining tapestry." ( Booklist)

What listeners say about Throne of Isis

The story was very believable in the way it combined politics, love and magic in very the interesting lives of the four main characters. It was interesting to imagine how 2 very independent women could shape their sex lives so differently. Unfortunately, the narrator was monotonous and actually detracted from the story. By the time I was half way through I found myself thinking about how lines should have been read rather than what was being said. All the characters had the same voice, same intonations, same emotions. This is one book I would have liked much better by reading it myself.

What a shame!! Such a rich and colorful book, sweeping epic story read by someone who should not read aloud even to herself. The drone of her monotone drove me to distraction. A WAIST of MONEY!!! Buy the book!!! Read it yourself, I beg you.

I liked the book but there were multiple times where the verse was repeated throughout the book.. Im not sure if this was a problem with the download or the way they recorded it. Was slightly annoying. But overall, I thought the book was good and although fiction, depicted Cleopatra nicely...

for history fans the last chapter gives sources and information..for me it was the highlight of the book
narration was well suited to the material..read with feeling but thankfully not too dramatic
it's a story about people from the God like to the servants the humanity equilises them all.
I did like it and looked for more Judith Tarr but this is the best and the narration carried the book