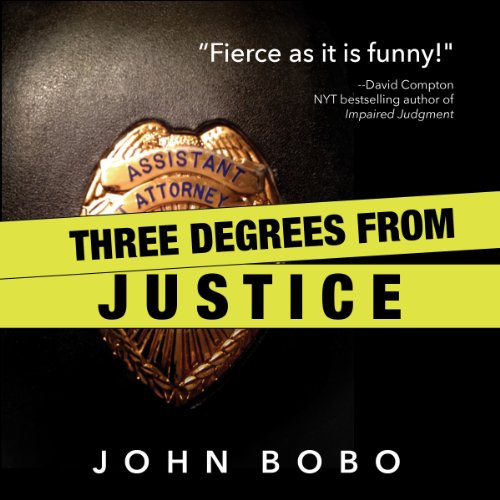 Jack Henley is not who he appears to be. After his fiancee is killed by a man on early release, Jack goes on a dark crusade to fix the criminal justice system. In the courthouse, he is a respected state prosecutor, but after work, he’s a member of a victims support group trying to end the state-sanctioned catch-and-release program.

By making most of the legislature, judicial and executive branches victims of crime, the state will finally have the laws it needs. But Jack learns more than he bargained about vengeance, forgiveness, redemption and truth. A battle to save a broken system becomes a battle to save himself. A fast-paced crime novel that takes the listener on a gritty rollercoaster ride through the sausage factory of criminal justice and into the lives of people it touches.

Would you consider the audio edition of Three Degrees from Justice to be better than the print version?

I did not read the print version but I can say that Bobo's sultry southern writing style spoken through Dorse's pipes is pure magic. You begin to realize why generations ago, people gathered around the radio to listen to stories. It's picture painting in a way that cinema, despite its best effort, still doesn't touch.

What was one of the most memorable moments of Three Degrees from Justice?

When Jack forces the priest to marry him and his fiancée in the emergency room.

He takes you there.

The book really keeps you plugged in. You understand how badly hurt Jack Henley is by the murder of his fiancee yet there's stunned disbelief that a person, high up in the halls of justice, can fall so far when it's his ox that is gored.

Really enjoyed the audio book. The easy connection to the characters made it fun and easy to follow. You find yourself rooting for Jack and his group of cronies, not knowing what is next or how it will all end. This is not your typical crime thriller. Highly recommend to anyone that enjoys a great crime novel.

I got the Kindle book + $1.99 for audio. I could not put down my Kindle until I absolutely had to. But switching to the audiobook -- awful! The narrator sounds like an old man on his deathbed, whispering his last words. He TOTALLY ruined a great book. (If the narrator has a medical condition, I apologize to him and really hope he goes into another line of work.) The story and characters were great and I haven't read a lawyer story I enjoyed more since the early Grishom days and the plot is truly novel, not another courtroom rehash. The lawyer in this book seems like vibrant mid-late 30's, maybe early 40's. Why oh why would anyone let this horrible collapsed voice near this story? I am constantly amazed at the idiocy of the audiobook industry. I really hope Bobo keeps writing and I can't wait for his next book. Hope someone gives him some coaching on narrator approval between now and then.

Filled with suspense, drama, and a bit of humor

Would you consider the audio edition of Three Degrees from Justice to be better than the print version?

No idea, as I didn't read the print version. However, I'd recommend the audio version just to listen to Daniel Dorse's spectacular performance.

What was one of the most memorable moments of Three Degrees from Justice?

(NO SPOILERS!) I finished this audiobook a few days ago and there are still many moments that stand out. However, I don't want to describe any of them as I'd rather people experience them for the first time on their own. But I will say here were so many memorable moments that I will probably listen to this audiobook again several months from now despite knowing how it ends, even though I have never listened to an audiobook twice. The book is just that good.

He did a great job with the different voices, and there was never any confusion over which character he was portraying. At first I wasn't sure what I'd think about his soft yet gruff voice, but I quickly became used to it and his voice seemed to be a good fit for this novel. The only problem I had was when listening to the audiobook in my loud car. There were a few times where Dorse's voice was almost in a whisper, yet the action in the book required a louder voice, such as a character yelling. I had to adjust the volume a few times to keep the quieter and louder voices at decent levels. Overall I loved his performance and would buy his audiobooks in the future.

Yes!! I wanted to finish it shortly after I started listening, but at the same time I didn't want it to end since I knew the author hadn't written any other books of this nature. I forced myself to drag it out over a period of a few days just to delay the gratification of listening to it.

Although "Three Degrees from Justice" is partly about a man's desire for revenge and justice, it's also about his attempts to cope with the grief he experiences after his beloved fiance dies. He is filled with anguish but doesn't realize it, and this leads him to doing things he otherwise would not do. Character development was superb, as were the action scenes and the building of suspense.

I was surprised this was the author's first fiction book, but I was also saddened to see this is the author's ONLY fiction book. For what seems to be a first entry in this genre, John Bobo did a marvelous job creating a protagonist the reader will care about. He used his experience in the courtroom to create scenes seemingly representative of the judicial system without using terms that would confuse the average person. The legal scenes were interesting and helped advance the storyline without adding unnecessary characters or events.

While listening to this book there were many times where I smiled, gasped, laughed, or cried. It's one of the best audiobooks I've listened to, and I can't recommend it enough.

To John Bobo: if you're reading this, please give us more.