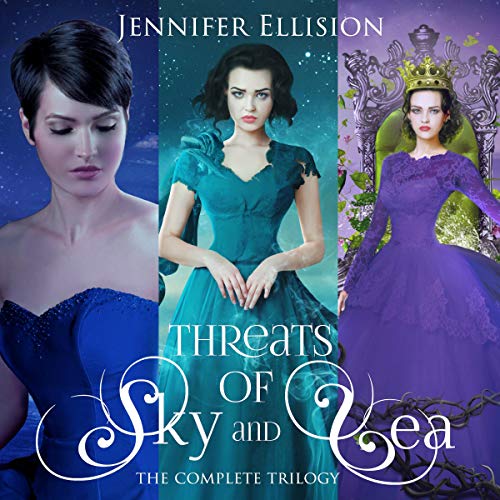 Threats of Sea and Sky: The Complete Trilogy

By: Jennifer Ellision
Narrated by: Jeanie Talbot
Try for $0.00

In a world of Elementals, she thought she was ordinary. She was wrong.

Seventeen-year-old Bree is happy to be powerless in a kingdom where Elemental abilities mean a life sentence waging the king’s war. But everything changes when Elemental soldiers recognize her father as a traitor to the throne and he's thrown in jail - along with the secrets from his last mission as the king's assassin.

Now, she’s coping with powers she never expected. She’s under the thumb of a king she despises. Her father’s in prison; his past, a mystery. And the king? He wants to weaponize her for war.

To save her father's life, Bree must unravel the knot of his past before the king takes his life - and uses her to bring a kingdom to its knees. And time is running out.

Throne of Glass meets Avatar: The Last Airbender in this epic YA fantasy perfect for fans of Sarah J. Maas and Leigh Bardugo.

What listeners say about Threats of Sea and Sky: The Complete Trilogy

i loved the book but not just that i loved the person telling it! she brought the characters to life!

bree was very very annoying but considering her age its expected this was a great story . I thoroughly enjoyed. wish there was more to the ending but we have to leave all to our imaginations.

HEART of sea and sky

A WONDERFUL AMAZING NARRATION of the series! Jeanie Talbot did a good job of both the male and female parts of the series!
This series has ghosts, interaction and revenge!

Story line had the potential to be good but kept losing its flow.
Narrator's evil king voice was more like a pantomime villain and soon became extremely irritating.
I tried to finish it but had to give up half way through.