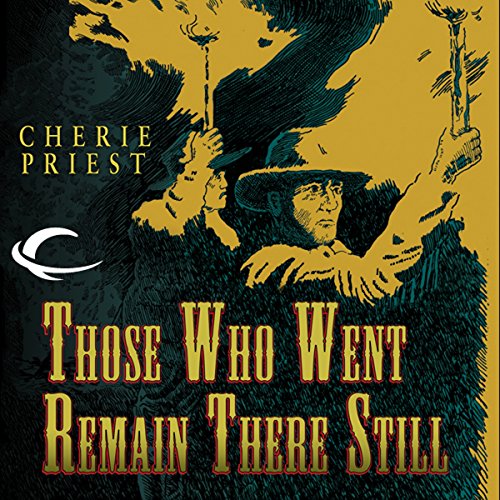 Those Who Went Remain There Still

Heaster Wharton is dead, and his passing might mean an end to hostilities between the Manders and the Coys. If the the elderly patriarch showed the kindness and foresight to split his land cleanly between his feuding descendants, then a truce could be arranged. But his final request is a strange one, delivered across the country to the straggling remnants of his tribe.

Representatives from both families must visit a cave at the edge of his property in the hills of Kentucky. There, he promised, they would find his last will and testament. But there's more than paperwork waiting underground, as vindictive old Heaster was well aware.

In 1775, Daniel Boone and a band of axe-wielding frontiersmen struggled to clear a path through the Cumberland Gap into the heart of Bluegrass country, and they did not work unopposed. Hounded and harried by an astonishing monster, the axe-men overcame the beast by sheer numbers and steel. They threw its body into a nearby cave.It was not dead. And now, it is not alone. Crippled and outraged, for 100 years something terrible has huddled underground, dreaming of meat and revenge. But its newest callers are heavily armed, skeptical of their instructions, and predisposed to violence.With their guns and their savage instincts, Heaster's grandchildren will not make for easy pickings.

What listeners say about Those Who Went Remain There Still

Would you listen to Those Who Went Remain There Still again? Why?

Yes, I would listen to this again. It's a terrific horror story!

John Coy. I think he was one of the more fleshed out characters, as well as one of the narrators. I also liked the character of Granny Gayle; she kinda reminded me of Ma Kettle, but she did almost boarder on being a stereotype.

What about Marc Vietor and Eric Michael Summerer ’s performance did you like?

No, I didn't laugh or cry. I did talk to the characters somewhat, but I tend to do that during horror stories, because I care about the characters.

I liked this book very much. It rattles along at a good pace, and ends, I think, much too quickly. And I was thoroughly creeped out. Be forewarned: I am fairly easily creeped out if the story is good. If the story or writing is bad, I'll drop out of a book in a heartbeat. This one kept my interest so well I listened to it at home on a Saturday, instead of during my long commute.

It was totally unexpected. And riveting. It was just a darn good horror story!

What about Marc Vietor and Eric Michael Summerer ’s performance did you like?

I thought both of them did an excellent job. I usually don't like books with more than one narrator, so I was skeptical, but it was appropriate that there were two narrators, since there were two timelines to the story.

Would you consider the audio edition of Those Who Went Remain There Still to be better than the print version?

I think that if I had just read this story it wouldn't have gripped my imagination in such a creepy way, but the narrators bring to life the anger, the stress, and the spine tingling fear of something standing right behind you that really makes this story so much fun to listen to. It is absolutely a story that is meant to be heard!

What other book might you compare Those Who Went Remain There Still to and why?

Ms. Priest has produced a classic ghost story, just with new characters and, wonderfully, a whole new monster! I can happily compare this to the

What about Marc Vietor and Eric Michael Summerer ???s performance did you like?

The work done with the accents that would have been heard at that point of history was a good deal of the reason why I enjoyed this story so much. You get so much more out of the character when you can hear their voice. Both narrators really did excellent work bringing the Daniel Boone character (he said 'barr' for bear, ha!) as well as the later two shades of characters to life, in all their anger and confusion and resentment as well as the wistfulness and fear of men who are being haunted.

I have no idea. That's a lot to put on a person. I loathe tag line pressure.

My daughter and I like to listen to this book at night when we're on long distance road trips. At four and a half hours in length, its just long enough that we can listen to the entire thing in one go, which makes the spooky experience much more delightful.

The story is set in the horror, hates, and legends of a small town in Kentucky. It manages to keep you compelled through out. My only complaint is that it could have been a touch longer. Good story and a good reader.

Those Who Went Remain There Still is a short Southern Gothic horror novel by Cherie Priest which I listened to in audio format. The story follows two plotlines told in alternating chapters. One is excerpts from Daniel Boone’s Reflections Upon the Wilderness Road which he wrote while leading a group of trailblazers across Kentucky. Every night, Boone and his men are being stalked, picked off, and eaten by a huge bird-like monster.

The second plotline follows the history of Daniel Boone’s descendants in the rural Kentucky area where Boone met the monster. They’re an inbred, ignorant and nasty lot that’s been split into two feuding families. A couple of the family members from each side manage to “escape” by running away, eventually acquiring some education, and progressing to a new standard of living. Each is called home years later when the family patriarch dies and leaves a will which must be searched for in a nearby cave. Here the two plotlines converge.

Priest’s story is unsettling from the start when we read the first entry in Daniel Boone’s Reflections Upon the Wilderness Road as he describes his men’s encounters with the bird monster. At first he reports only cursory images of the thing but as the story continues, we get more sensory details and it gets more frightening. At the end we meet the monster face to face and by this point Priest has complete control over our mental imagery so that everything it does, even the smallest bird-like movement of its head, is disturbing. When Boone’s narrative is over, we assume we’re done with monsters, but no, it only gets more horrifying.

It’s not just the monster that’s unsettling. The two families who descended from Daniel Boone could populate the cast of Deliverance. They are vividly portrayed and utterly odious. Besides Daniel Boone, who we only know through his journal entries and later as a ghost, the only characters who are remotely likable are the two who left Kentucky and even they’re hard to fully endorse since they abandoned their families and wouldn’t have come back if it hadn’t been for the will.

Those Who Went Remain There Still was my first exposure to Cherie Priest’s work and I was impressed. Her writing is vivid, well-paced, and she has a great ear. She has spent most of her life in the Southeast and attended college and graduate school in Tennessee, which probably explains her authentic voice.

Those Who Went Remain There Still is an excellent example of Southern Gothic. I highly recommend the audio version produced by Audible Frontiers and read by Marc Vietor and Eric Michael Summerer. The narrators are both spot-on with their Southern Gothic voices and this is one of those cases where I felt that the audio version might be even better than print. It’s a brilliant performance. You can listen to a sample at Amazon or Audible.

Despite my reservations I thoroughly enjoyed this book. Was a little far fetched but entertaining.