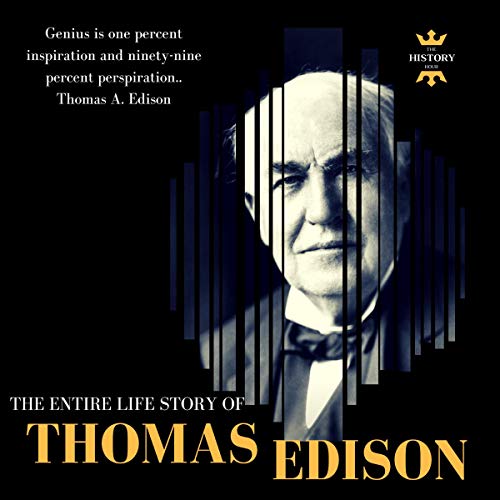 By: The History Hour
Narrated by: Jerry Beebe
Try for $0.00

There is a lot more to the story than just the light bulb, and there is a lot more to the invention of the light bulb than just Thomas Edison. One thing is for sure - he is still remembered as one of the greatest inventors of all time and perhaps the greatest that America has ever produced. In truth, Edison was a man who invented a lot of things while bringing about incredible advancements in many other things. With the stock ticker, the telegraph, the light bulb, and the motion picture, he may not have invented them, but he improved on them beyond any recognition. They would not be the technologies they are today without Edison’s great mind working on them.

Thomas Edison seems to be remembered these days either as the man who invented the light bulb or as the man who didn’t. Without knowing any more about him, you are either giving him false praise for something he didn’t do or not taking into account all the other work he did.

What listeners say about Thomas Edison

Enjoyable biography of a great mind with a endless search for practicality in his inventions. Although his ego was his dominant shortfall, he was able to succeed by sheer quantity of innovation. Thoroughly enjoyed the book.

Awesome books! I’m enjoying reading them as much as the kids are. I’ve recommended to others!

These books are great for my third graders

These books are great for my third graders! They use these for their big biography projects and they offer tons of great info!

clarified alot of things for me. Straight forward read. Very good information. A misunderstood man for sure.

Short re-cap of Edison's life, Interesting and enjoyable. He invented more things than I realized. Because of my hearing loss I liked that the narrator spoke slowly and distinctly.

I was disappointed with this book. it's not possible to capture the biography of a man like Edison in an hour and a half audiobook. I wanted a deep understanding of the man, his upbringing, and the things that shaped his life. There were a few details that I hadn't heard before but most of the content sounds like a list of things someone found on the internet and assembled in roughly the right chronological order.

Thomas Edison is known for being an American inventor of a lot of the things we take for granted today
such as the electric light bulb. He most often took the early ideas of others and made them into something
worthwhile.

The book tells how he had a hearing loss early in life that probably caused him to be considered "slow" in
school and school failed him so badly that his mother educated him at home and his father paid him to read
books. He believed like I do that mathematics is not essential to learning and said he would hire mathematicians
rather than learn it. As long as I can balance my checkbook, cook and figure out percentages for tips or sales
I am good! Mr. Edison got in trouble a lot when his research went wrong but he managed to become a young
businessman on his own and publish his own newspaper at 15. He loved working with chemicals but his mother
did not approve

The great men are remembered for famous things, b


The great men are remembered for famous things, but in their lives, especially the scientists, they do many other things and many high discoveries even if minor.
In this book we talk about Edison, of what he did, who he met. A detailed summary of his life. A book of personal culture that deserves to be read.


Learned a great deal about Edison's strong and stubborn determination. Book is filled with lots of surprises regarding his personality.

This book is extraordinary ! Very well listen !I really enjoyed it! I listen it all in one shot, because I found it so diverting. I am anxious to find more books by the same author. recommend !!

Thanks so much for providing us with something as fun as it is educational. I simply can not wait to find the next one.

The Biography of a Gentleman, The Inventor
I Admire the Most, from Past Time, a Greatly Gifted Individual with High Ideals, Principles and Values! Who's Sole Purpose was to Connect the World Trough His Numerous Inventions With a Positive Purpose...

Better for everyone who are searching for a Great scientist book with some sort of struggle? Than this one is one of the best. I would prefer this one above every book. I am totally satisfied with this book

Edison was a brilliant inventor

Edison was a brilliant inventor matched only by his work ethic. He was also a poor business man who unfortunately held some racist beliefs. Whether a fan of the man or not this book offers an in depth look into the life and habits of the man who's inventions shaped the 21st century.

Wow!!! I really loved this book. Lots of information about Thomas has included in this book that i did not know before.

This book is a quick summary that provides the most important information first without all the fluff, which is enjoyable. It's short (not so short as to make me question why I should buy it for this price) but short enough that I have time to read it

This book is not a long read, I finished it in a couple hours, but it is packed with tidbits of information about Edison's life, from his early childhood to the legacy he left behind. Some of this information I wasn't aware of, and I like learning new things.

“If Edison had a needle to find in a haystack, he would proceed at once with the diligence of the bee to examine straw after straw until he found the object of his search… I was a sorry witness of such doings, knowing that a little theory and calculation would have saved him ninety per cent of his labor.” Tesla may have been a bit unkind in his comment. Edison’s legacy is that he achieved his greatest successes by the unrelenting labor of his teams in pursuit of his goals. Yet Edison to some extent would have likely agreed with Tesla’s comment, having once told Theodore Dreiser, “When I have fully decided that a result is worth getting, I go about it, and make trial after trial, until it comes.” Edison added, “I hope I will be able to work right on to the close. I shouldn’t care to loaf.”