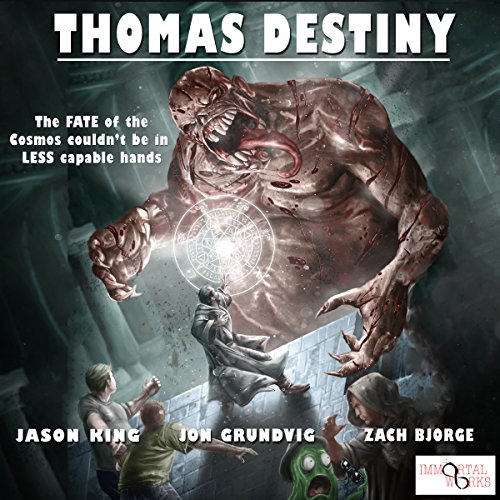 By: Jason King,Jon Grundvig
Narrated by: Zach Bjorge
Try for $0.00

Twelve-year-old Thomas doesn't have a dad and so hasn't done much of the camping-fishing thing. But this year he gets to go on his first week-long summer camp, and it's shaping up to be the epic adventure his friends promised it would be...that is until he accidentally releases a demon hidden in a cave behind a waterfall and gets hurled through a dimensional rift.

Lost in an alien world, Thomas pledges to find a powerful shard of creation for the mysterious Dreja (dr-ey-yuh) Lord, Arvek, in exchange for passage back to Earth. At his side are Bruno, a baby giant who eats just about anything and has ambitions to someday taste giraffe. The druid, a robed vagrant whose incessant lying, stealing, and reckless antics continually endanger Thomas and the others. The "Green Dude," an unintelligible shapeshifting blob disguised in a hat and sunglasses. And Darius, a young wizard warrior sworn to fight the growing threat of an ancient evil.

To achieve victory, Thomas and his party of would-be heroes will have to survive a forest infested with wraiths and zombies, scale a lava spewing mountain of fire, traverse a cursed desert, and face the greatest challenge of all: their own woeful incompetence, pointless in-fighting, and a tendency to stumble into unnecessary peril. It'll take more than magic, bravery, and sacrifice for this band of misfits to save the Cosmos - it'll take a miracle.

What listeners say about Thomas Destiny

A Book For Everyone

This was clearly meant to be a book for boys, but I think that everyone will enjoy this book regardless of age. It was very well written and kept me engaged throughout the entire book. The main character seemed very realistic and was very resourceful. The author also did a great job with describing the new world that Thomas found himself in. I listened to the entire book in one day!

I thought the narrator was above average and never once thought he was anything short of the right person.

I requested and received a free copy of this audiobook from the author, publisher, or narrator in exchange for an unbiased review. I was NOT required to write a positive review and this reflects my honest opinion of the work.

I found this book to be massively appealing for starters. I love the scout connection as well as the great survivor elements in the book. As all scouts are trained to be both industrial and survivalist. Thomas the main characters does display some very young boy characteristics in the book showing he is still just a boy and vulnerable. The monsters and other characters he meets are very graphically described making for an excellent boys book. As the do love their monsters. I believe the will epic themselves as young Thomas and find his adventure very alluring. I received this book at no charge in return for an honest review. The narration on this book is awesome! He kept the characters vibrate and flowing throughout the whole story and his projects at times so spot on I felt I was listening to a sound track from a move. Very well read indeed.

If you could sum up Thomas Destiny in three words, what would they be?

That It Incorporated Modern Day Times With A New Twist Of Adventure..

Have you listened to any of Zach Bjorge’s other performances before? How does this one compare?

The Was My First Listen... The First Several Chapters He Was Reading Entirely Too Fast But Then He Slowed Down And Kept Rhythm With The Action Of The Book...

The Book Was Slightly Confusing...It Went A lot Of Different Directions At First But After A Third Into The Book It Found Its Pace...


“I was voluntarily provided this free review copy audiobook by the author, narrator, or publisher.”

Amusing tale for all ages

Take a 12-year-old lapsed Boy Scout a five-year-old giant warrior a portal to another world stones that control aspects of reality. A demon that wants them all and a society created to protect them only two stones left a weird green dude dude a pathological liar and a mystical warrior in some crazy adventures and this is the story that you have. Well written and well narrated the only reason the performance got a four was the volume jumped all over the place on certain characters voices and it kind of became a bit distracting going back-and-forth on controlling the volume. I was voluntarily provided this free review copy audiobook by the author, narrator, or publisher.

A funny and entertaining fantasy adventure

Thomas Destiny is a fun and humorous fantasy adventure reminiscent of the Percy Jackson series. The story is appropriate for most children and adults, with some violence and scary moments. The narrator does a terrific job reading the story.