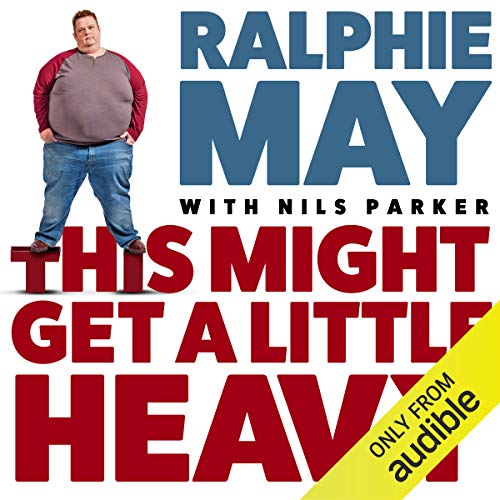 By: Ralphie May,Nils Parker
Narrated by: Oliver Wyman
Try for $0.00

There was a time when Ralphie May was one of the biggest stand-up comedians in the country, both by ticket sales and by tonnage. While some things changed - Ralphie lost half his body weight - others did not: He will be remembered as one of the most successful comics of his time. Completed just months before his untimely passing, in This Might Get a Little Heavy, Ralphie takes listeners on a behind-the-scenes tour of his life and career, one that winds across the country, over obstacles, beyond heartbreak, and through the golden age of stand-up.

Raised in poor, rural Arkansas by a single mom who struggled to make ends meet, Ralphie's early years were the perfect breeding ground for the kind of pain and stress and adversity that only comedy can cure. Bitten by the comedy bug at a Methodist sleepaway camp when he was 12 years old, Ralphie seized a once-in-a-lifetime opportunity six years later at an open mic in a pizza parlor. Mentored and inspired by legendary comedian Sam Kinison to move to Houston, where he got his start, Ralphie packed his bags and never looked back. A major headliner for over 25 years, in This Might Get A Little Heavy, Ralphie finally tells the world how a chubby poor kid from Clarksville went from Arkansas to Houston to Hollywood and beyond. Full of never before told stories from Ralphie's life, This Might Get A Little Heavy will bust your gut, pull at your heart strings, and touch your soul.

What listeners say about This Might Get a Little Heavy

one of the funniest, amazing,hysterical most wonderful book s I have ever read wait, heard. sad that just a few short months this book was published the poor funny bastard died. I just about died myself laughing, hard listening to this man's stories. not many people can make you laugh, belly laugh, at his most tragic stories. what a shame he was taken too soon. I love this book, this man, his friends and family. one day i'l have the courage to tell jokes funny stories in front of people without giving 2 turds, if I bomb get heckled or triumph. this man is an inspiration. probably the most underrated underappreciated comics to walk this earth. r.i.p good sir

At first I was kinda disappointed that Ralphie didn’t read his own book but as it got to the really serious stuff I understand why he didn’t.
That was some painful shit he was laying out.
To have to write and then read it for all of us to hear would have been torture.
He tells the story about his neighbors wedding and if you want to hear that from him. It’s on YouTube. He tells it on Ari’s Comedy Central show. It’s very very funny.
God bless you Ralphie.

One of my favorite comedians. The book is excellent. Ralphie had such a great out look on most things in life. Sucks he's not still around.

I cried, I laughed. I appreciate!

I wasn't sure how I'd feel listening to Ralphies memoir with it personally from from him but I gotta say... I loved it! Thank you to all that made this book and this audible available to us. The world's a lil sadder without Mr. May.

We Miss You Big Guy!

I loved Ralphie so much and was so very heartbroken at his sudden passing. This book was a wonderful way to hear his story and remember my favorite comedian. It also gave me some insight into the issues he was facing at the end of his life. This book is hilarious, truthful and really shows how his career started and the hard work he contributed to make his career such a success. I really wish he would have touched a bit more on his personal life, but I still enjoyed the story. It really is too bad he wasn't able to finish this story, it seems to end a little too soon. We miss you Ralphie May.

fun to hear the story of one of comedy's greats. performed well. wish there was a chance for a follow up.

The World Lost a Precious Gift😢.

This is definitely worth it. I want to go buy a hard copy and actually read it. I'd recommend it in a heartbeat, surprisingly enough right along side Matthew Mcconaughey's Greenlight's. Both are deep, analytical, for everything there is a season types. They're the realist big dreamer's, simultaneously hilarious and serious, walking talking, oxymoron's, my favorite type's of human's. I only wish he'd written more before he passed. Honestly I wish he hadn't passed so he could have written and was writing more along with any other projects he would've blessed us with.

Ralphie May was jem of our generation.

We don't know truly the value of something until its gone....Ralphie May you will always be my favorite comedian, and you'll always have a special place in my heart. A true red, white, and blue, blooded American!!! You'll be cherished, and not forgotten.

Not worth it, save the money and credit for someone else. His story may have started rocky but his pain doesn’t fit his comedy.

I was a big Ralphie May fan, scratch that I am still a big Ralphie May fan. I did not expect to cry like a little kid because this is a comedy book or so I thought but, Because I am a fan of Ralphie, and listening to him tell his story and knowing that he’s approaching the end of his life it broke my heart. I still highly recommend this book.