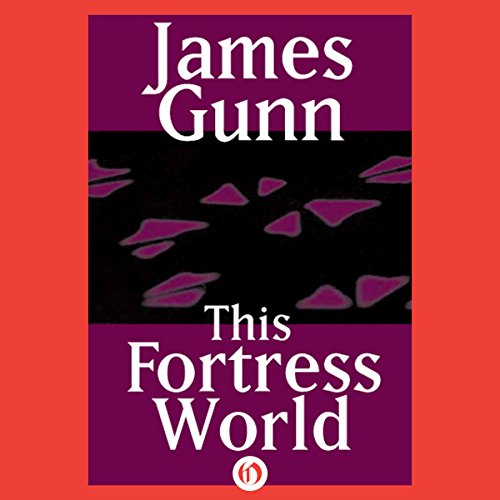 SFWA Grand Master James Gunn's This Fortress World takes place in the far future of our galaxy, when countless civilizations have risen and fallen, leaving only their marvelous scientific achievements as legacy to those worlds that have now fallen into a new Dark Age.

On the planet Brancusi, William Dane, an acolyte monk in the all-powerful Church, comes into possession of a crystal pebble dropped in the offering plate, a stolen treasure believed to hold untold secrets of mankind's past. There are powerful men who will stop at nothing, including murder, to recover this ancient artifact, and Dane must flee for his life to protect the knowledge the crystal holds. Once in the outside world, to which he is a stranger, and no longer in the comforting isolation of the Cathedral where he has spent his entire life, Dane faces not only internal challenges to his deepest held beliefs, but those external and involving the long-term destiny of mankind - if only he can survive.

Deceived, imprisoned, tortured, and now a murderer himself, Dane must not only break down the walls that have kept him alone in the world, but those imposed upon the people through an oppressive centralized government, a government putting its own desires above those of its people.

What listeners say about This Fortress World

I think I bought this book because it was on somebody’s must-read science fiction list. I’m not sure I’d included it on a must-read sci-fi list, but in fairness it was entertaining. It was the author’s first published book, and that might explain some of the issues I had with the story.

The story is an action-packed romp on a dark and grimy world set in a future following man’s triumphant expansion into the stars but after the collapse of man's initial, successful interplanetary society. There’s lots of intrigue and other cloak and dagger stuff. I was puzzled by the way the main character, an athletic monk acolyte quickly learns to be a super effective combatant, though. That might have been accounted for by the explanation of the main character’s special nature at the end of story. If so, though, that was never made explicit.

Anyway, I liked the overall philosophical thrust of the story. But it had a few too many dramatic rescues and easily-flummoxed bad guys for my taste. That said, I think the story would definitely appeal to a younger (male, sci-fi fan) reader.