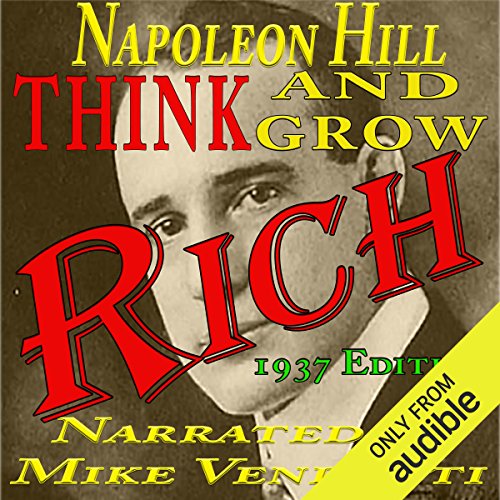 By: Napoleon Hill
Narrated by: Mike Vendetti
Try for $0.00

The secret of success is simple, and you can listen to this audiobook, narrated by award-winning narrator Mike Vendetti, to find out what it is.

"Whatever your mind can conceive and believe, it can achieve." (Napoleon Hill)

This 1937 version of Think and Grow Rich by Napoleon Hill has helped millions of people achieve success and riches. It has been the go-to text of nearly every successful person since it was published at the end of the Great Depression. Andrew Carnegie commissioned Mr. Hill to interview over 500 millionaires to find a success formula that could be used by the average person to achieve success. Napoleon Hill dedicated nearly 25 years of his life to studying what made Thomas Edison, Alexander Graham Bell, Henry Ford, Charles M. Schwab, John D. Rockefeller, and many more rich and successful.

You, too, can think and grow rich.

What listeners say about Think and Grow Rich

A Classic, but somewhat dated

Would you listen to Think and Grow Rich again? Why?

This book is a classic and has stood the change of times for a reason: it is really good and has a lot of really good advice that will help you in many ways in your life, not only in the accumulation of wealth. That being said, it also shows its age, there are things that are born from going through the age of the stock crash of 1929 and the great depression, and the world War that had preceded both. Some of the values he harps on about are also born of that age and are therefore well dated. The chapter on sexual motivation seems ridicously long. The length of the discussion and repetition of certain examples also deducts from the overall impression. Despite all of this, I enjoyed this book, and there are many things that I have taken away from read and study of this book. The narration by Mike Vendetti while very capable also makes me feel that this is a very old book we are dealing with.

This is a timeless read. I also purchased the workbook. Many helpful reflections and actions that can be readily put into practice.

After listening to this you can understand why it changes people's lives. Thoughts truly are powerful!!

Way ahead of his time

This Author must have had a crystal ball. His insight and skills of observation are remarkable. Anyone who reads this book will see that the content is as true today as it was back then. Everyone should read this book if they want to know themselves and be successful.

A true "WEALTH" of information, it's going to take a few times through to absorb it all.

I do not see why this book has remained popular for so many years. The concept of thinking so hard and focusing on money will guarantee riches is insanity. This book consists of 30 minutes of helpful tips and 9 1/2 hours of nonsense.