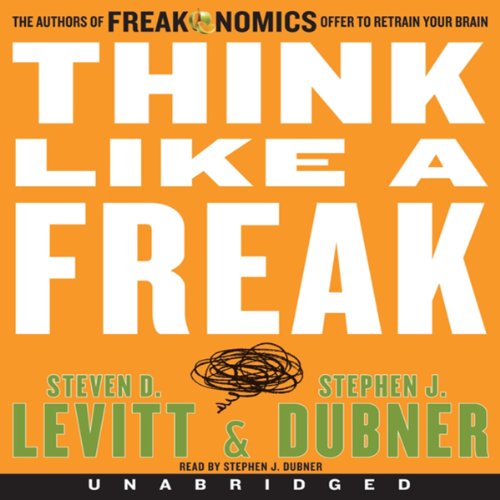 The New York Times best-selling Freakonomics changed the way we see the world, exposing the hidden side of just about everything. Then came SuperFreakonomics, a documentary film, an award-winning podcast, and more.

Now, with Think Like a Freak, Steven D. Levitt and Stephen J. Dubner have written their most revolutionary book yet. With their trademark blend of captivating storytelling and unconventional analysis, they take us inside their thought process and teach us all to think a bit more productively, more creatively, more rationally - to think, that is, like a Freak.

Levitt and Dubner offer a blueprint for an entirely new way to solve problems, whether your interest lies in minor lifehacks or major global reforms. As always, no topic is off-limits. They range from business to philanthropy to sports to politics, all with the goal of retraining your brain. Along the way, you’ll learn the secrets of a Japanese hot-dog-eating champion, the reason an Australian doctor swallowed a batch of dangerous bacteria, and why Nigerian e-mail scammers make a point of saying they’re from Nigeria.

Some of the steps toward thinking like a Freak:

Having listened to the authors' last two books, I did not expect any really serious stuff and find it overall an enjoyable listen. However, the abrupt ending of the book just a bit after 5 hours surprised me as I was still expecting more interesting stuff to unfold. I suppose some statement about its actual length should be in the book description to prevent any disappointment.