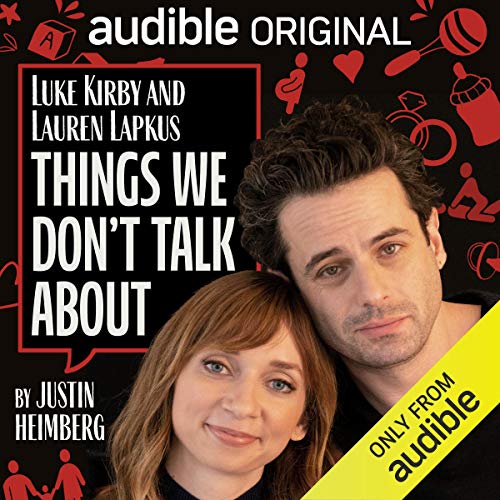 Things We Don't Talk About

Go Behind the Scenes of Things We Don't Talk About

Justin Heimberg is a screenwriter, media entrepreneur, and author. As a professional feature film and TV writer for nearly twenty years, Justin has worked with most major movie studios including Disney, Paramount, Warner Brothers, Fox, and Universal. He has also written for The Cleveland Show—where among other duties, he co-wrote raps with guest star Kanye West—and then promptly cut Kanye’s lines. Justin is also the author of over twenty humor books, which have sold over 2 million copies in the United States alone. His books range from adult humor to children’s adventure novels and include the bestselling Would You Rather…? series which has spawned, among other properties: a board game, a DVD game, and a game show in development. He has served as a humor writer and contributing editor for magazines including Esquire, MAD, and Details.
Justin was also a Teaching Artist at the non-profit, DreamYard L.A. where he facilitated workshops to help at-risk, incarcerated, and probation youth find and express their voices through writing and performance. He lives in Gaithersburg, Maryland, the mecca of creative entertainment, with his wife and two daughters.
Humorous
Show more Show less
Luke Kirby
Lauren Lapkus

Luke Kirby is a 2019 Emmy Award winning actor for his portrayal of Lenny Bruce on The Marvelous Mrs. Maisel. On stage he starred in Odon von Horvath's critically acclaimed play Judgement Day at New York's Park Avenue Armory. Luke is also known for his role as Gene Goldman in The Deuce for HBO. He can be seen in M. Night Shyamalan’s Glass, and Nia DaCosta’s Little Woods, opposite Tessa Thompson, in Netflix’s Tales of the City as Tommy opposite Jen Richards, and on Facebook’s Sorry for Your Loss opposite Elizabeth Olsen. Other credits include Dreamworks’ A Dog’s Purpose, directed by Lasse Hallström, and Take This Waltz, directed by Sarah Polley. TV credits include Little Voice (Apple); The Twilight Zone (CBS All Access); The Astronaut Wives Club (ABC); Rectify (Sundance TV); Show Me a Hero (HBO); Slings & Arrows (Sundance Channel). Theatre: Too Much, Too Much, Too Many (Dir. Sheryl Kaller, The Roundabout Theatre Company); Defender Of The Faith (Dir. Ciaran O’Reilly, Irish Repertory Theatre); Jump/Cut (Dir. Leigh Silverman, The Women’s Project); Troilus and Cressida (Dir. Peter Hall, Theatre For A New Audience).

Lauren Lapkus is an actress and improviser best known for her role as prison guard Susan Fischer on Netflix's Orange is the New Black, which won her a SAG award. She most recently starred as the title character in The Wrong Missy opposite David Spade and produced by Adam Sandler, which debuted at #1 globally on Netflix and garnered Lapkus rave reviews for her performance. Previously for Netflix, she co-starred in Between Two Ferns: The Movie alongside Zach Galifianakis. In 2018 she starred in The Unicorn, which premiered at SXSW. In 2017 she was nominated for an Emmy for her role of Samantha Newman on Funny Or Die's The Earliest Show. Lapkus had a scene stealing role in the blockbuster Jurassic World and created and starred in her own episode of The Characters for Netflix. She recurred on all three seasons of HBO's Crashing, starring Pete Holmes and produced by Judd Apatow, as well as the final two seasons of CBS's Teh Big Bang Theory. Lapkus was also one of Variety's 10 Comics To Watch in 2016.
Lapkus’ improv podcast, With Special Guest Lauren Lapkus, debuted at #1 on the comedy section of iTunes. She and Jon Gabrus co-host the popular 90s nostalgia podcast, Raised by TV, and she also hosts the podcasts Threedom with Scott Aukerman and Paul F. Tompkins and Newcomers: Star Wars with Nicole Byer. She toured throughout the United States and Australia as part of the Comedy Bang! Bang! live tour in 2016. Lapkus' other credits include series regular roles on the sitcoms Clipped for TBS and Are You There, Chelsea? for NBC. She has also appeared on The Guest Book*, Comedy Bang! Bang!*, Kroll Show, Key & Peele, Lucifer, Meltdown with Jonah and Kumail, Another Period, House of Lies, and Drunk History. Her film credits include Holmes and Watson with Will Ferrell and John C. Reilly, Dog Days, and Blended, starring Adam Sandler and Drew Barrymore. Lapkus currently voices Lotta on the Netflix animated show, Harvey Girls Forever! and has lent her voice to a number of other animated shows, including Bob's Burgers and American Dad on FOX, Adventure Time on Cartoon Network, and the HBO comedy Animals.


If you’re a comedy fan looking for your next listen, you just might want to give scripted comedy a try. Scripted comedies are a bit like sitcoms for your ears, with hilarious storylines matched only by all-star, laugh-out-loud performances. They can take risks and go in directions totally unique to audio, resulting in an entertainment experience wildly different from their television and film counterparts. You just never know what to expect with scripted audio.

From classics to modern favorites, this list features some of greatest stories brought to life by Hollywood’s best.
ARTICLE

If you’re looking to liven up a long road trip or day of chores, look no further than our list of the top 10 full cast audiobooks.

What listeners say about Things We Don't Talk About

As a 66-year-old widower

In a new relationship that just got married again

Hilarious and so real

This is hilarious. Captures life as a married adult so well. Sharp humor. Can’t wait to listen to the rest of these.

Funny, Make this a show

I do enjoy listening to this series on Audible, so I am torn when advocating for it to be made into a TV show (maybe it can be both), but it is really funny and would make a tremendous TV show. A lot of good characters, even the ones with bit parts. Some real life scenarios and some somewhat absurd (but funny - separation registry/party) make this engaging, relatable (to some) and fun to listen to. I want more episodes.

I was in love with this halfway through the first episode.
I don’t know how they did it, but they managed to get absolutely everything right with this one.
Everything! The music, the actors, the sound effects and writing, they were all phenomenal.

I truly liked tje story line, it's hilarious and often relatable if you are married with children or married trying to get pregnant. Looking forward to more series like this

I breezed through this podcast in a matter of days. It had a few laugh out loud moments. Some of the humor is kind of cheesy like the show Friends, but the characters do act like real humans for the most part. Unlike a sitcom, there is a continuing story. I'm in the middle of an IVF cycle, so found some of the subject matter particularly relatable, but would have listened to and enjoyed this even if that part weren't relevant to my life. I do highly recommend this to anyone who has experienced infertility, as it's nice to find humor in the situation (and be validated that you aren't the only one who had trouble finding right part of your butt to do the ovulation trigger injection after it's too late to call the doctor's office).

I think anyone under the age of 30 will probably not find the show relatable, as there are many aspects of middle adulthood (such putting off sex until later because you feel like you need to do the dishes) that were just unfathomable to me when I was younger.

Overall, not a must-listen, but I enjoyed it and am glad I stumbled across it. Also, I know this review focuses on the infertility aspect as that is most relatable to me personally, but that's not what the whole show is about. They also touch on work-life balance, marriage difficulties, divorce (trial separation), a teenager navigating her first romantic relationship, an older widow navigating her first romantic relationship since her husband passed, adult sibling relationships, and the gig economy--but in a comedic way. Give it a try!

This brilliant, bawdy humor from Heimberg is the perfect antidote to the president’s body of work.

Was that mother lover a crossover from Alexa, why don't you love me? Funny put relationships problems, usually of first-world people, Wasnt bad leisure time for me.

I really enjoyed this mini series. While the discussed topics often triggered a bit of sadness in me, it was nevertheless worth going through until the end. It is filled with thought provoking stories that highlight how challenging, complicated and not merciful, but also beautiful relationships can be.

absolutely awful. I could not finish any of the chapters as it was all just awful

Funny, sad, happy what more could you want...fab little freebie! Hope there is a part 2?!