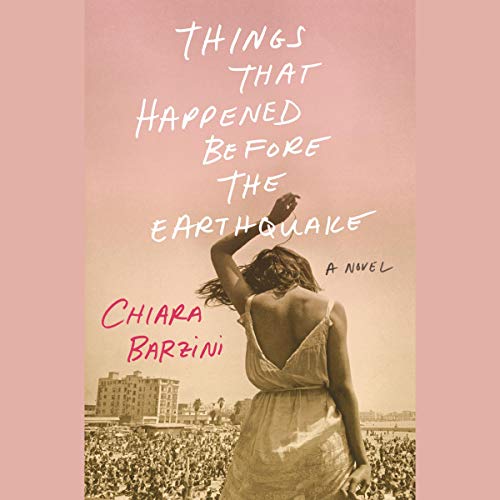 Things That Happened Before the Earthquake

Things That Happened Before the Earthquake

By: Chiara Barzini
Narrated by: Carlotta Brentan
Free with a 30-day trial

Welcome to LA? Nineties Hollywood gets an Italian makeover in this poignant and ruefully funny coming-of-age novel featuring a teenage girl who's on shaky ground - in more ways than one.

Mere weeks after the 1992 riots that laid waste to Los Angeles, Eugenia, a typical Italian teenager, is rudely yanked from her privileged Roman milieu by her hippie-ish filmmaker parents and transplanted to the strange suburban world of the San Fernando Valley. With only the Virgin Mary to call on for guidance as her parents struggle to make it big, Hollywood fashion, she must navigate her huge new public high school, complete with Crips and Bloods and Persian gang members, and a car-based environment of 99-cent stores and obscure fast-food franchises and all-night raves. She forges friendships with Henry, who runs his mother's movie memorabilia store, and the bewitching Deva, who introduces her to the alternate cultural universe that is Topanga Canyon. And then the 1994 earthquake rocks the foundations not only of Eugenia's home but of the future she'd been imagining for herself.

"An Italian teenage girl shows up in 1990s Southern California in this culturally astute, strong-voiced novel. Barzini, truly a writer to watch, positions herself astride both American and Sicilian cultures, and packs this visceral book with strong sensations from both. The novel and its heroine, Eugenia, are deeply seductive." ( New York Times)
"Chiara Barzini writes with a voice that is both tense and open. The effect is surprising, subversive, and singular." (Jhumpa Lahiri, Pulitzer Prize-winning author of Interpreter of Maladies)

What listeners say about Things That Happened Before the Earthquake

Nobody walks in LA

It caught my attention because I was a young adult in So Cal during the period this book took place. It started pretty strong - a family moves from Italy to the US to "make it" in Hollywood. Mom, Dad, Brother, Sister, Grandma. The book is told from POV of sister, a high school aged girl. There were some really fun reminders about time and place (and some not some fun reminders ... Rodney King, the Northridge earthquake, the OJ car chase.)

I finished this a couple weeks ago and I can't remember the girls name, but she is trying to find herself, and she makes some really odd decisions. The book just kind of fell apart. I think it may have been autobiographical, not really sure but it just wasn't very good. I was glad when it ended.

Yuck. I did NOT enjoy this book. I wish I could get my credit back.