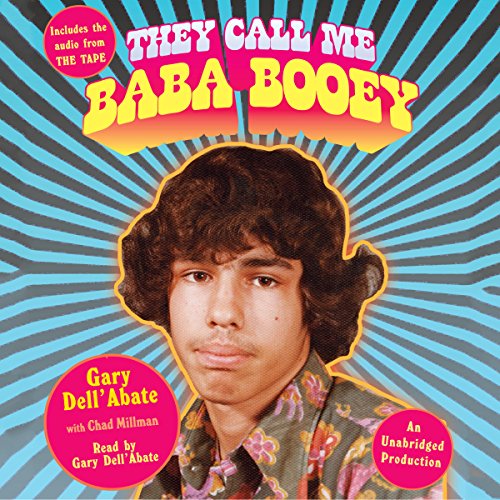 They Call Me Baba Booey

He's one of pop culture’s great, enduring, unsung heroes: Gary Dell’Abate, Howard Stern Show producer, miracle worker, professional good sport, and servant to the King of All Media. For the first time, he tells the story of his early years and reveals how his chaotic childhood and early obsessions prepared him for life at the center of the greatest show on earth.

Baba Booey! Baba Booey! It was a slip of the tongue - that unfortunately was heard by a few million listeners - but in that split second, a nickname, a persona, a rallying cry, and a phenomenon was born. Some would say it was the moment Gary Dell’Abate, the long-suffering heroic producer of The Howard Stern Show, for better or worse, finally came into his own. In They Call Me Baba Booey, Dell’Abate explains how his early life was the perfect training ground for the day-to-day chaos that comes with producing the most popular radio show on earth.

What listeners say about They Call Me Baba Booey

Gary's performance was a 9, but his story was a 2.

Slow [adult and lovers of wild animals, such as lowland gorillas.

Has They Call Me Baba Booey turned you off from other books in this genre?

Gary's presentation was long winded, mainly his performance turned me off.

What does Gary Dell'Abate bring to the story that you wouldn’t experience if you just read the book?

What character would you cut from They Call Me Baba Booey?

Baba Booey, he was boring.

A Stern fan must

Gary's life story was interesting. I could do without all the list but it's his book. Just the right length, could have got boring but never did. Any Howard Stern fan this is a must read. If Howard Stern is not your style you might not really get this book. It is like reading about a family member. I've been listening to Howard for 25 + years and Gary is a big part of that, if your not a listener not sure you would or could enjoy this as much as I did.
I'm glad Gary did the narration. Once again if you are not a Stern show fan you may not like listening to Gary and his speech impediment. Right Boff??

A few interesting parts interspersed between Gary's lists of his favorite '80s songs, and awkward conversations with high school buddies. I'm a fan of the show, but this book tested my loyalty.

This book was a Baba Booey

I'm a long-time fan of Howard Stern and his crew so I was eagerly awaiting the release of this book. However, I was quite disappointed. The book is mostly uninteresting, disjointed, and fails to provide much insight at all to the Howard Stern production. There isn't even a conclusion nor any coverage of his relationship with Howard. Even his relationships with Fred and Robin aren't really fleshed out. The extra conversations in the audiobook with old friends while a good idea were horribly executed. Gary violates his own rule of don't ask "yes or no" questions over and over. Gary Baba Booeyed this book. Sorry Gary.

The CAP to a career!

I wish i could have given it Noine stars! it helped me slow down and realize things from horse-toothed perspective.

Got to know the man behind the smile! Very interesting and cool to hear it from Gary himself.

I enjoyed how this book was written. It would tell the story about Gary growing up and then throwing in information about the Howard Stern Show. Gary's upbringing making him the person that he is helpful in his role as producer at The Howard Stern Show. As a long time listener of the show it helped me to understand more about who Gary is and how Howard appreciates him for who he is. I would recommend this book to any Howard Stern Show listeners. #HowardSternShow, #GaryDell'Abate, #Tagsgiving, #Sweepstakes, #BabaBooey

Awesome book. Great. read. or rather listen.. Gary is a great storyteller. gums teeth and all.

if you love the Booey, you'll love his story. Speaks to the life of loving and living with someone with mental illness.