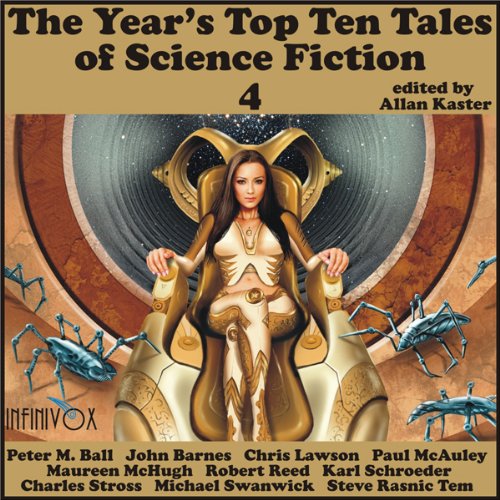 An unabridged audio collection of the "best of the best" science-fiction stories written in 2011 by current and emerging masters of the genre, edited by Allan Kaster, as narrated by top voice talents.

In "Dying Young", by Peter M. Ball, cyborgs, clones, and post-humans collide with a dragon bent on revenge in a post-apocalyptic space western. "Martian Heart", by John Barnes, chronicles a teenage couple taken to Mars as indentured servants in a "rags-to-riches" tale. In "Canterbury Hollow", by Chris Lawson, two lovers on a planet orbiting a killer sun share their few remaining weeks together before they die. "The Choice", by Paul McAuley, set in the author's Jackaroo universe, follows two boys who set sail to investigate a beached alien vessel on the English coast. In "After the Apocalypse", by Maureen McHugh, a mother and daughter traverse a ravaged U.S. in a tale that takes on Cormac McCarthy's, The Road from a female perspective. "Purple", by Robert Reed, tells of a blind and maimed young man convalescing in an off-world menagerie of wayward alien species, prior to returning to Earth. In "Laika's Ghost", by Karl Schroeder, a Russian and an American search the steppes of the former Soviet Union for metastable weapons that terrorists could use to make nuclear bombs. "Bit Rot", by Charles Stross, follows post-humans struggling to survive after their generation ship is struck by a Magnetar ray in this clever zombies-in-space tale. In "For I Have Laid Me Down on the Stone of Loneliness and I'll Not Be Back Again", by Michael Swanwick, Irishmen plot to strike back against alien occupiers by enlisting an Irish American tourist to their cause. Finally, Steve Rasnic Tem tells of a young man awakened from suspended animation on a future Earth with the technological know-how of plant-like aliens in "At Play in the Fields".

A good mixture of stories

There are two reasons I've been following the 'Year's Top Ten Tales' series. One is the stories, they're usually a good mix of well known names with some writers I've not heard of. I particularly like the McAuley and Reed stories in this series, and they adapt well to the audiobook format. The other reason are the narrators, particularly Tom Deehre and Vanessa Hart, who have that relaxed but precise style that isn't tiring over a long listen, and adds some personality to the stories. This edition of the series is overall pretty good, but I have a couple of issues with this and another editions too. It'd be great if the editor could list the stories in order as they appear. The other beef is Tom Dheere's penchant for doing 'accents'. For any otherwise talented voice artist it has to be said that Dheere cannot do accents credibly, at least not for anyone who knows Northern English accents. His attempts at Scottish and Yorkshire [I think!] on the McAuley story is so diabolically bad it took me three attempts to get through an otherwise excellent story. Word of advice Tom; lose the accents!

Karl Schroeder's story and Charles Stross's story are both very good - they make this collection worth buying. However, most of the rest are mediocre at best, and a few are kinda poor; you get to the end and you're like "what was the point of that?"

Is is really the best scifi had to offer the year this collection came out, i feel like sci-fi might need to go home and rethink its life.

Would you consider the audio edition of The Year's Top-Ten Tales of Science Fiction 4 to be better than the print version?

Not better but more available. I have more time to listen than I do to just sit and read.

The varied stories of future / science fiction. Each is a window to watch the story without devoting 12 to 15 hours for longer books.

The plants which take care of the world are lonely and depressed. And a bit confused. The old human race just does not make sense to them.

No other reaction other than enjoying the story.

The stories were quite good but the narrators were not. The narrator of the last story was so bad that I could not listen to it.

Don't waste your money or your time.

Accents, particularly the Scottish and Irish were bad enough to be off putting. The stories are dull and dreary. It's hard to see why any of them made any top ten.