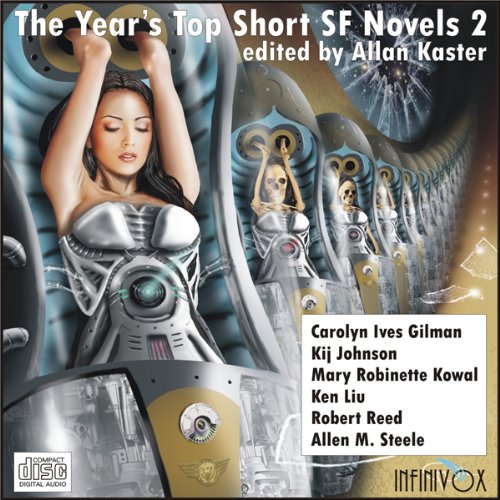 Short novels are movie length novels that may well be the perfect length for science fiction stories. This unabridged audio collection presents the best-of-the-best short science fiction novels published in 2011, by current and emerging masters of this form.

In "The Ice Owl", by Carolyn Ives Gilman, an adolescent, female, Waster, in the iron city of Glory to God finds an enigmatic tutor who provides her with much more than academic instruction while a fundamentalist revolt is underway.

In the Hugo Award winner, "The Man Who Bridged the Mist", by Kij Johnson, an architect from the capital builds a bridge over a dangerous mist that will change more than just the Empire.

In "Kiss Me Twice", by Mary Robinette Kowal, a detective, with the assistance of the police department's AI - who takes on Mae West's persona - solves a murder with all the flair of an Asimov robot story.

"The Man Who Ended History: A Documentary", by Ken Liu, is a moving chronicle of attempts to witness the history of Japanese atrocities against the Chinese in a World War II prison camp by traveling back in time using Bohm-Kirino particles.

In "The Ants of Flanders", by Robert Reed, a teenage boy, incapable of fear, takes center stage in an alien invasion of Earth that pits alien foes against each other in a war that has no regard for mankind's existence.

Finally, in "Angel of Europa", by Allen M. Steele, an arbiter aboard a space ship, exploring the moons of Jupiter, is resuscitated from a hibernation tank to investigate the deaths of two scientists that took place in a bathyscaphe underneath the global ocean of Europa.

What listeners say about The Year's Top Short SF Novels 2

Some Decent Sci-Fi but with Poor Audio Quality

Echo of well-known human historical trends playing out in other world contexts. Character development was good, but story arc could have been much more imaginative.

The talent of the narrator (which seemed well above average) was trampled by the lack of audio quality: sounded like someone whispering through a long pvc pipe, with every "s" sound the loudest. Had to stop when using cheap earphones as it was unlistenable; better earphones shortened the length of the pvc pipe but fundamental shortcoming remained.

Narration: 3 of 5
The narrator's English was unadorned American midwestern--but almost devoid of emotion or inflection. The parts of the story that had snatches of German sounded more authentic and natural, leading me to think German is his native language--and wishing the whole story could have been in German to get the better voice performance. Recording quality below average

3. "The Ants of Flanders" by Robert Reed. Narrated by Adam Epstein

Entertaining and imaginative story of how Earth fits into a larger tapestry when a spaceship lands on earth, told from perspective of a totally believable teenager of the millennial or maybe Gen-X variety. The story rewards the reader by taking several large leaps in development that are both unexpected yet plausible. The end is particularly satisfying and succeeds where so many stories fail: ending in a new and fascinating place that is far from where it started, and leaving the reader with excitement, questions, and a hunger for more.

It's not clear at the beginning, but the somewhat bland and disinterested tones of the narrator actually help put the reader inside the head of the ambivalent teenage protagonist. Maybe that was not the intent, but it was a welcome effect. Recording quality below average.

4. "The Man Who Ended History" by Ken Liu. Narrated by Nancy Linari

Fascinating take on the effect technology to allow individuals to virtually witness past events, focusing on the biological experiment atrocities of Japanese Imperial Army's Unit 731 in WWII China While overly long, story does a good job of capturing the the political unintended consequences of the technology and its application.

Cop buddy murder story in very near future where one partner is Artificial Intelligence. Well done, but not a fan of the genre.

6. "The Man Who Bridged the Mist" by Kij Johnson
Narrated by Scott Peterson

Slower tempo storytelling than most sci-fi, but satisfying presentation of one episode of industrialization on a planet where its inhabitants don't yet fully understand the bio-diversity of their own environment. Decent examination of the societal impacts of early industry.

Poor audio stories maybe good but you will not get pat the audio.

What could the authors have done to make this a more enjoyable book for you?

PEOPLE DIDN'T KNOW ENOUGH TO BE PROPERLY TERRIFIED.
Anytime you see Allan Kaster's name on something, turn the other way. I should have know better, having been disappointed by Kaster before. This had four stories from authors, I had interest in. I had recently read stories by Gilman, Steele, and Kowal that were good enough to draw my attention to them. Reed is almost always reliable for a good story, so I took a chance on Kaster, figuring that there were surly one or two good stories in the batch. Wrong, wrong, wrong. When Kaster says Top, what does he mean. Top of the crap, top of the left overs after Dozier, Hartwell, Strahan and everyone else have picked the top stories, top of WHAT?

WE'LL MAKE THAT HARNESS, WHEN THE COLT IS BORN
Gilman and Kowal's stories were so bad, that I could not finish listening. Reed's story was silly, and Liu's story barely good enough to listen to. Steele's story was a little better. Kiji Johnson's story was the best and supposedly won a Hugo. As an experienced reader, let me tell you that awards are not a good indicator of rather a story is good or not. Early on I tried reading most of the award winners, figuring they were the best, WRONG. In this case it is the best read of the group, but not good enough to buy the collection.

There is also problems with the production of some of these stories. The first story sounds like the reader is in a sub basement reading through a mega phone. Some of the others also have problems. The narrators I did not think were terrible, but they won't be winning any awards for their performances. It sounds like they are just getting started in their careers and most will have to go back to their day jobs.

Also, don't bother looking for The Year's top Sci-Fi stories under in the category Science Fiction/Fantasy and Short Stories and Anthologies, as there are no anthologies included under that category, except WE Robots. You will not find any of Kaster's collections there, none of Dozier, George R.R. Martins or the many anthologies by John Joseph Adams. It seems to be the home of Neil Gaiman's stories. Audible is in bad need of a Science Fiction editor. They seem to be overrun with young editors that read Romance and Teen books.

Haunting - a few of the stories

Haunting - the ghosts of a few of the stories have stuck with me through the completion of several other books...like memories you cant shake, one bittersweet, one thoughtprovoking , one humorous...but overall an enjoyable listen.

Most of these stories were not very good. Only a couple, such as "Kiss me twice" and "The man who bridged the Mist" made slugging through the others worthwhile.