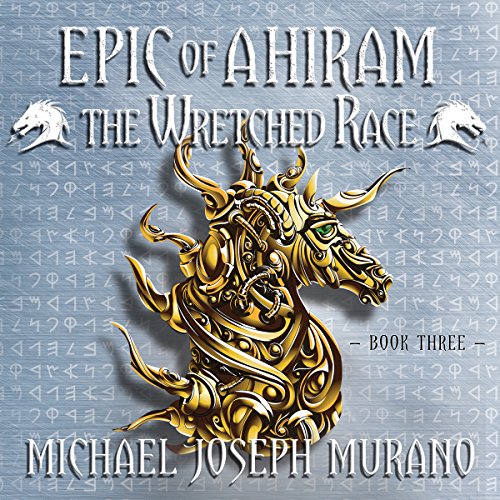 By: Michael Joseph Murano
Narrated by: Richard Evert
Try for $0.00

The Epic of Ahiram continues...

The Epic of Ahiram is an award-winning high-fantasy adventure that begins with Age of the Seer and its sequel, Wrath of the Urkuun, and now continues with The Wretched Race, the third book of the series.

Sarand the Soloist would kill everyone in her path if she knew that 12-year-old Aquilina was alive. Risking everything, Aquilina's guardians bring her to Tirkalanzibar, where a caravan will take her far away from the clutch of the Soloist.

But Tirkalanzibar is a city of cutthroats and dark secrets where no one is safe for very long. Aquilina's family and friends get caught in a deadly web of deceit that only she can unravel, at the risk of alerting Sarand of her existence.

Further north, Ahiram is on the run. The former slave is trying to reach his homeland in search for clues that might reunite him with his family. But deep within the temple of Babylon, Sharr - the High Priest of Baal and Sarand's superior - hatches a devious plan to inexorably draw the Seer into the Wretched Race. Ahiram's chances of surviving the deadly ordeal are nil, for the Wretched Race was conceived to torment and torture the racers. But Sharr has prepared a trap worse than death to ensnare Ahiram before the Race's end, and bind him to the Temple's will.

Still unaware of each other's existence, the two Seers ride the mighty storm, forging a destiny all their own that may one day turn them into the heroes they were meant to be, if only they survive the might of their implacable enemies.

What listeners say about The Wretched Race

Through the whole book I could not wait to listen to the next chapter. You will enjoy the captivating continuation of the epic.