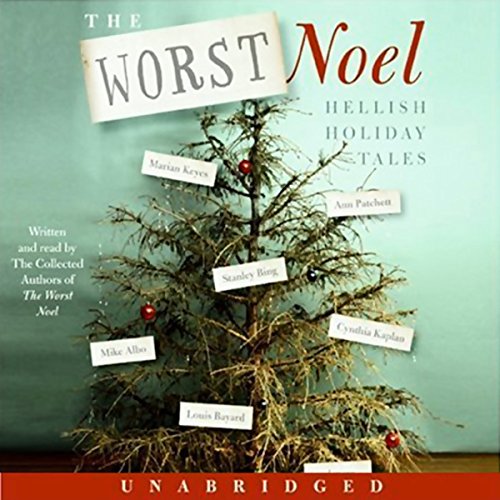 It's that time of the year again, the holiday season. Between checkout lines a mile long, the office party hangover, battles with traffic, and delayed flights, what's better to do than to listen to The Worst Noel and laugh your holiday aggravation away?

The collection features an eclectic mix of writers with playful, often dark humor as the common thread.

Audio contains the following essays, read by the contributors:

"Donner Is Dead" by Cynthia Kaplan
"Blue Christmas: The Tour" by John Marchese
"Eight" by Amy Krouse Rosenthal
"That's Just About Enough Figgy Pudding, Actually" by Catherine Newman
"Birthdays" by Ann Patchett
"Christmas 2001" by Anne Giardini
"'Twas the Bite Before Christmas" by Stanley Bing
"Survivor" by Louis Bayard
"I'll Have Christmas with the Works on Rye, Hold the Ham and Jesus" by Valerie Frankel
"Christmas in Paris" by Mike Albo
"We Really Must Get Together This Year" by Marian Keyes, read by Katrina Keyes
"The Gift of the Magi Redux" by Binnie Kirshenbaum
"A Foreign Country" by Mitchel Symons
"The Jew Who Cooked a Ham for Christmas" by Neal Pollack
"Rum Balls" by Roger Director
"Buy Humbug" by Cintra Wilson
"The Gift That Did Not Need Wrapping" by Elizabeth Noble

"This would make a nifty gift for the Scrooge on book buyers' lists." (Publishers Weekly)

What listeners say about The Worst Noel

Still waiting for the humor...

Good grief! This is *not* the book to read for a lighthearted take on the holiday! Despite the publisher's summary suggestion that this book will make you "laugh your holiday aggravation away", the tales were depressing enough that halfway through the recording my husband made me promise not to play this in the house! Stories involving crashing cars into deer, and even into Santa himself; musings on holiday suicide; children suffering through poverty (with the mice and rats eating the decorations off their Christmas tree, no less!); more children weeping over the divorce of their parents; people miserable over the bleakness of Chanukah... my goodness, this is enough to have you reaching for the antidepressants. I suppose the bright side of this recording is that it will make you realize just how mild your holiday complaints are compared with these tales. But it's not family listening... or even recommended for anyone who's not in the mood to wallow in misery. The narration being done by the authors is a nice touch, but ths book itself is just depressing.

Saying that I hated this book would be too strong, because there were a couple of worthwhile stories. I was expecting humor, nostalgia, irony, poignancy, or something give me a reason to keep listening. Instead, too many of the stories were whiny, boring and irritating. If you're looking for an amusing, thoughtful or "feel good" holiday book, this is not it.

I got this book before x-mas time to get a few laughs. However, most of the stories were dark and depressing, and most of the humor feel flat (at least to me). Some stories were better than others, but I found it an entirely forgettable book.