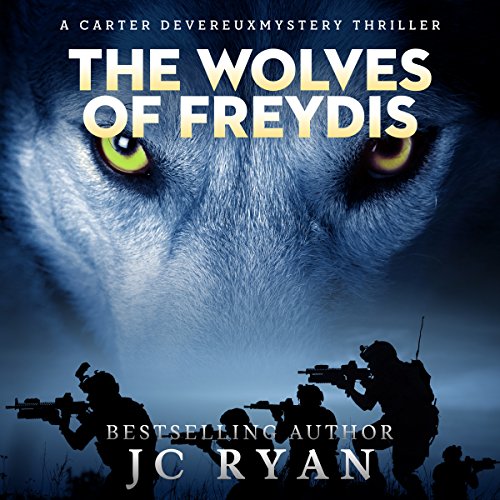 The Wolves of Freydis

Carter Devereux's idyllic world had been shattered and catapulted into chaos and with it, the fate of humanity.

With a traitor in their midst who seems to stay one step ahead of them, it is a race against time for Carter Devereux and a team of Special Forces operators who must fight evils never before encountered.

Can they identify the traitor in their midst, free the captives from an unknown location, and stop the evil from sweeping in and changing the world as we know it?

The Wolves of Freydis is a full-length novel, a fast-paced suspense-thriller about human history and an international political conspiracy with tentacles reaching across the globe into the highest hallways of power. It is the second book in J C Ryan's Carter Devereux Mystery Thriller series, the sequel to Nothing New Under the Sun.

What listeners say about The Wolves of Freydis

Great sequel for Nothing New Under the Sun

I’ve been looking forward to listening to this audiobook since Book 1’s ending snuck up on me. JC Ryan did a great job of pulling together characters with seemingly nothing in common. The book begins with a little back story, so those who didn’t read Book 1 are not in the dark. The pace was fast and I found myself listening to the audiobook in 2 days.

I really appreciate the relationship between Carter (main character) and his team. All were close and most worked together in the “business” after leaving government acronym jobs, ie CIA, FBI, etc. I didn’t give 5 stars because I thought the ending was a little predictable too soon; but maybe I caught on quick. Nevertheless, this book has its twists and turns, and it does not disappoint.

If you choose this audiobook from Audible, please take note. I was not able to download the book on my main device (iPhone) or secondary. Audible was good at attempting to solve the issue, but it never worked. I finally listened to it using my smart tv. This platform bound me to my couch in order to listen, but it was well worth it!

I was given a complimentary copy of this audiobook in exchange for my unbiased review.

Exceptional. Couldn't listen fast enough. Now for book three. Amazing and captivating all the way through.

The Wolves of Freydis A Carter Devereux Mystery Thriller, Book 2, this is a fantastic listen, I always thought book 1 was great but this one goes to a higher level.
Beautifully written with a strong storyline - characters feel real with depth and the descriptive scenes of Freydis are wonderfully descriptive. Tension biulds throughout the book.
Narration is excellent and very easy to listen too. Smooth and grips you with the storyline.
I was given a free copy of this audiobook at my own request, and voluntarily leave this review.
To sum up this is definitely a book to read/listen for all lovers of this genre , one of the best.
And it's going into my re-read pile - not many books make it there.