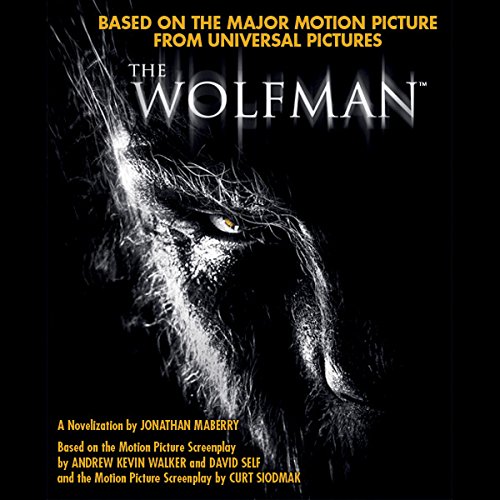 By: Jonathan Maberry
Narrated by: Fred Berman
Try for $0.00

Lawrence Talbot's childhood ended the night his mother died. After he left the sleepy Victorian hamlet of Blackmoor, he spent decades recovering and trying to forget. But when his brother's fiancée tracks him down to help find her missing love, Talbot returns home to join the search. He learns that something with brute strength and insatiable bloodlust has been killing the villagers, and that a suspicious Scotland Yard inspector has come to investigate.

As Talbot pieces together the gory puzzle, he hears of an ancient curse that turns the afflicted into werewolves when the moon is full. Now, if he has any chance at ending the slaughter and protecting the woman he has grown to love, Talbot must destroy the vicious creature that stalks the woods surrounding Blackmoor. But as he hunts for the nightmarish beast, a simple man with a tortured past will uncover a primal side to himself . . . one he never imagined existed.

This is a work of fiction. All of the characters, organizations, and events portrayed in this novel are either products of the author’s imagination or are used fictitiously.THE WOLFMAN Copyright © 2010 Universal Studios.

What listeners say about The Wolfman

so so predictable but fun

Well, I asked for it - The wolfman is well know and sure enough i could predict everything that was going ot happen before it did and normally that's ok but there just isnt enough action for it to be ok here. but its a fun, old english werewolf tale.

The idea of the Wolfman is a great story, in the sense that the character is wild and much can be done with it. This is an adaption of a screenplay, that was made into a movie. The reader and the language are a bit too dramatic. Maberry usually tempers that type of dramatic writing with comedy or at least light humor. Here there is none of that. It takes itself too seriously. It’s language is over the top but also repetitive. I wish he would have just written his own take or used one of the werewolf characters from another of his novels.

In the end it’s just okay. Worthy of three stars but no more than that. The reader does a good job fitting with the material, in that he too is also overdone. There are much better pieces in Maberry’s stable of novels.

great rendition not my favorite

it was terrific I loved the movie and audiobook, it stayed true to the story line

Great book and outstanding performance of the narrator!!! One of the best books I've listened too so far

This adaptation of The Wolfman was in a word: PHENOMENAL!! Highly recommend to anyone interested!! I actually enjoyed this more than the movie; and I loved the movie! Seriously good read. The narrator is on-point with his timing, accents, tone of voice - all of it. And the story is beautifully written capturing every little detail and emotion.

"parts of the bear were bare"..."fired into the fire". Even if the writer lacks poetic flare, a thesaurus can be found for free online or at any seller of fine literature...and likley on the word processor used to write this thing. The story is entertaining enough and the performance is tolerable.

Fun version and the narrator does an excellent job. If you saw the movie with Benecio del Toro you'll still really enjoy as you get all the details of changing into and being a werewolf.

Loved the movie so was excited to hear the audiobook....and boy I was not disappointed. The narrator was amazing and read the book with such passion. I was hooked from start to
finish. 10/10