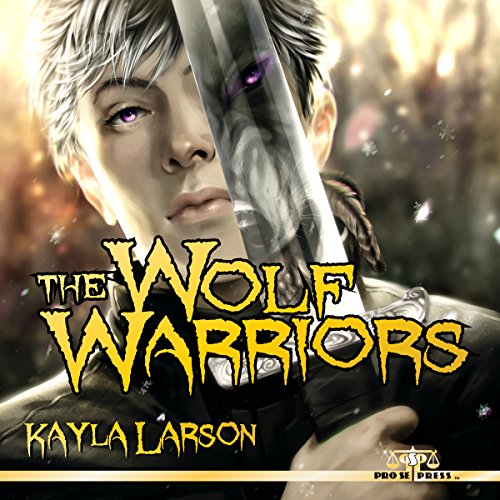 By: Kayla Larson
Narrated by: Chase Johnson
Try for $0.00

The gods are at war, the land of Argethlam is beset by hard times, and Atreyavahl is near collapse because of the assassination of their Queen Viesha a century before. A prophecy tells that the god of darkness, Ardeth Anubace's Black Wolf, will bring the fall of the inner kingdom and then Argethlam, leading the world into Ardeth's rule. But Ramos Ra, the sire-god, created his own champion, the White Wolf to defeat the Black Wolf and purge the land of Ardeth's curse. Mercenary daemon Debello has wandered Argethlam for 100 years with amnesia. He searches for the only clue to his past, a daemon named Vaulx. Once pieces start to come together, Debello soon realizes his forgotten memories were to a life hidden in the inner kingdom of Atreyavahl and that he may indeed be one of the wolves of the prophecy. But which one? Ardeth's Black Wolf, a paragon of death and destruction? Or Ra's White Wolf, the only hope Debello's world has? Is Debello life...or death?

Author Kayla Larson brings a new world to stark life surrounded by ever-present death in her debut novel and the first in a series, The Wolf Warriors from Pro Se Productions.

What listeners say about The Wolf Warriors

The writer has a distinct formula that becomes predictable after the first few chapters. As exhausting as it was to experience an epic fight every single chapter with few moments of rest, the characters did feel unique and charming. The world itself is very interesting with a history that can sometimes steal your attention from the main plot. Johnson's narration was definitely my least favorite part. Male characters sound like pro wrestlers and female characters were a bit distracting even comical due to his higher pitched imitations. This quite often stole emotion from important dialogue, which in turn limited Larson's story telling.

Overall there were more things I enjoyed about The Wolf Warriors than not. At around 7 hours, this story can be told in one day and I recommend a go at it. The action scenes, although over packed, are a lot of fun.