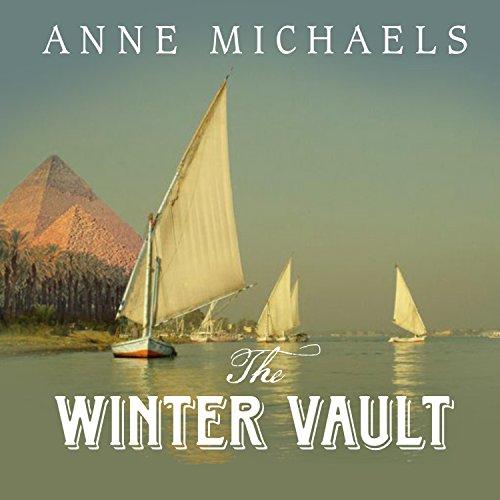 By: Anne Michaels
Narrated by: Karen White
Try for $0.00

In 1964, a newly married Canadian couple settle into a houseboat on the Nile just below Abu Simbel. Avery is one of the engineers responsible for the dismantling and reconstruction of the temple, a "machine-worshipper" who is nonetheless sensitive to their destructive power. Jean is a botanist by vocation, passionately interested in everything that grows. They met on the banks of the St. Lawrence River, witnessing the construction of the Seaway as it swallowed towns, homes, and lives.

Now, at the edge of another world about to be inundated, they create their own world, exchanging "the innocent memories we don't know we hold until given the gift of the eagerness of another." But when tragedy strikes, they return to separate lives in Toronto: Avery to school to study architecture; and Jean into the orbit of Lucjan, a Polish artist whose haunting tales of occupied Warsaw pull her further from Avery but offer her the chance to assume her most essential life.

Stunning in its explorations of both the physical and emotional worlds of its characters, intensely moving and lyrical, The Winter Vault is a radiant work of fiction.

"Exquisite.... A tender love story set against an intriguing bit of history is handled with uncommon skill." ( Publishers Weekly)

What listeners say about The Winter Vault

I have tried to listen to this book twice, but the narrator has the most annoying voice. She pronounces every word as if it is the most important word in the sentence. I just cannot bear to stick with it. She has ruined the book for me.

For lovers of novels of knowledge and ideas as well as breathtaking poetical feats of language, like those of A.S Byatt and Michael Ondaatje, The Winter Vault will dazzle, delight, and move you.

There are people who say that poets shouldn’t write novels. If you are someone who agrees with this statement, then this novel is probably not for you. I say this as a disclaimer, in view of the fact that I have rated this book so highly—not everyone will agree with me, and I don't want to mislead a potential reader into spending a credit s/he will regret. It’s a matter of personal, perhaps even aesthetic, taste. The Winter Vault is an incredibly beautiful, detailed and complex novel that reads like poetry. This is Anne Michaels’ signature style, as any of you know who have read her 1996 Trillium Award winning novel Fugitive Pieces—which has remained one of my top five favourite novels ever since it came out 15 years ago.

If you feel the same way, then I think you will love The Winter Vault. It is a novel of moments, both private and public, historically significant and personally devastating, that intersect and intertwine like subtle threads on a loom. This is a delicate, subtle, and intense read that is more character than plot driven. Its historical richness mirrors and reflects the internal conflict of the people whose story it tells—something for which Anne Michaels is also known. History is more than a backdrop—it is the warp and weft of the tapestry in which these lives are wrapped. A beautiful, breathtaking book.

That being said, I did not enjoy the narration. Someone else commented that the way the narrator reads is really irritating because she enunciates each and every word as though it was the most significant one in the sentence—and I think that is a very good way of putting it. There is a definite disconnect between the emphasis she places and the actual emphasis needed. Nonetheless, it isn’t terrible. One can get used to it. I wish someone else had read it, but it wasn’t a deal-breaker. You should be able to tell from the sample whether or not you will be able to put up with it, or if you think I'm crazy and need my ears cleaned out, because Karen White is a wonderful narrator. Again, personal and aesthetic taste reign over this audio book!

Not as good as "Fugitive Pieces"

Struggled to finish. Allegoric and metaphoric. Too much back and forth between reality an memories and internal dialogs, hard to distinguish when one ends and one starts. But fascinating as always, the world of Anne Michaels...

The reader did the best she could to make the characters come to life, but the writer was so busy making their inbteractions poetic, profound and thoughtful that she failed to make them warm and real. She spent alot of time making lists of every nuance that the whole thing became tedious listening.

The story was slow, didn't care what happened to the characters.