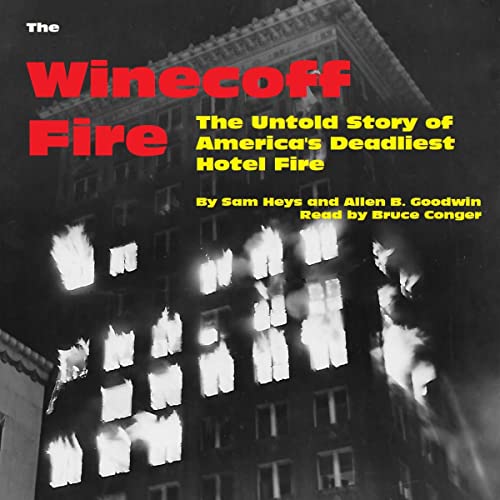 By: Sam Heys,Allen B. Goodwin
Narrated by: Bruce Conger
Try for $0.00

As America slept in the pre-dawn hours of December 7, 1946 — in preparation for a somber remembrance of the fifth anniversary of Pearl Harbor Day — 280 of its citizens awoke suddenly in a hotel already burning out of control.

For the next two and a half hours, they would fight their own war, mostly against their own surging, unrelenting fear.

Like the unsinkable Titanic, Atlanta’s Winecoff Hotel had been billed as “fireproof”. And, in fact, it did not burn. Its guests did. Or they died on Peachtree Street, or in quiet clusters, huddled together for courage against the silent, suffocating smoke.

One hundred nineteen people died. The rest survived by extraordinary heroism or blind luck. This is their story — all of them, the dead and the lucky — a story of ordinary lives colliding with catastrophe, a moment frozen in time.

And a story of an investigation that went awry.

What listeners say about The Winecoff Fire