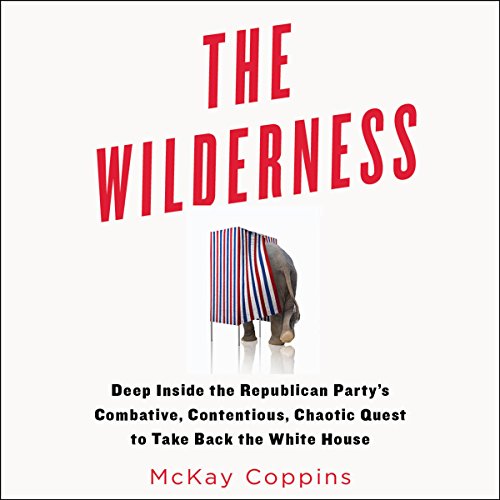 Deep Inside the Republican Party's Combative, Contentious, Chaotic Quest to Take Back the White House
By: McKay Coppins
Narrated by: John Glouchevitch
Length: 14 hrs and 28 mins
Categories: Nonfiction, Politics
4.5 out of 5 stars 4.4 (104 ratings)

The explosive story of the Republican Party's intensely dramatic and fractious efforts to find its way back to unity and national dominance.

After the 2012 election, the GOP was in the wilderness. Lost and in disarray. And doggedly determined to do whatever it took to get back to 1600 Pennsylvania Avenue.

McKay Coppins has had unparalleled access to Republican presidential candidates, power brokers, lawmakers, and Tea Party leaders. Based on more than 300 interviews, The Wilderness is the book that opens up the party like never before: the deep passions, larger-than-life personalities, and dagger-sharp power plays behind the scenes.

In wildly colorful scenes, this exclusive look into the Republican Party at a pivotal moment in its history follows a cast of its rising stars, establishment figures, and loudmouthed insurgents - Jeb Bush, Chris Christie, Ted Cruz, Carly Fiorina, Bobby Jindal, Rand Paul, Marco Rubio, Paul Ryan, Donald Trump, Scott Walker, and dozens of others - as they battle over the future of the party and its path to the presidency.

An interesting look inside the dynamics of the early formation of the Republican field for the 2016 presidential election.

The author seems to focus on the relationships between the candidates as they cynically try to crush each other. In doing this he gives a pass to the self-idolizing backstories each of them (via political aides and themselves) have worked in to his book.

He also lets zany republican talking points spouted by the candidates go unchecked. But it was still interesting and illuminating because by sticking to the facts and even hewing to the version of events presented by each candidate's camp, it shows how cynical, damaged and delusional each and every one of these possible future presidents really is.

I would be interested in reading a part 2 that covers the primaries and the election.

Well written if perhaps a little choppy at times.

Recommended for lefties and right wingers alike. Oh and independents like me!

A unique and interesting read, chock-full of stories and interviews you can't get anywhere else. Very well done.

The political drama recounted by Coppins is of the highest quality. I didn't want it to end. It is a must-read for anyone who wants to make sense of the 2016 GOP primary circus.

If you could sum up The Wilderness in three words, what would they be?

I got to know each of the Republican candidates and was most surprised by the story of Jeb Bush & Paul Ryan. Jeb, because he IS so different from his family of origin - very appealing. Paul Ryan, because he actually walks the walk, doesn't just bluster his way around on a bunch of hot air. I hope he will lead the GOP over to his way of thinking - I might even become a Republican!!

When Paul Ryan worked in the "trenches" with addicts in recovery.

If you could give The Wilderness a new subtitle, what would it be?

who they are & where they come from

At first I liked it

but lost a bit of interest with emphasis on the dropped-out Jindal, and never-ran Paul Ryan. Meanwhile ... Christie, Santorum, Huckabee and Carson weren't covered at all. Rand Paul's story was the most interesting, in that I knew more about evangelicals than he did! About halfway through the author interviews Trump, with a highly unfortunate aftermath, with the book taking a nosedive in the following chapter: glossing over Fiorina's tenure as a CEO, with an implication that she was a great success, when in reality, "highly controversial" would be more accurate; that lead to a tangent on how Sarah Palin was doomed from the start by a hostile media determined to portray her as unqualified.

I got the book as I'm a political junkie, but found it overall disappointing. Narration was okay.

A good primer for the ongoing Republican primary

I enjoyed the background info on several of the candidates... Even though some have dropped out (Walker, Jindal). Jeb really does not come off well. The central thesis regarding the GOP becoming aimless as they seek THE representative to lead then into the future and take back the White House is basically correct.