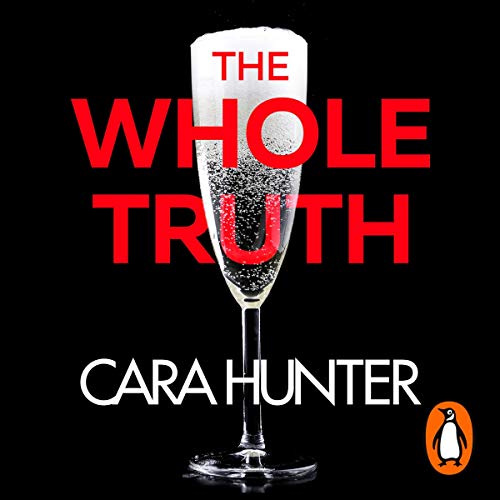 An attractive student. An older professor.

When an Oxford student accuses one of the university's professors of sexual assault, DI Adam Fawley's team think they've heard it all before. But they couldn't be more wrong.

Because this time, the predator is a woman and the shining star of the department, and the student, a six-foot male rugby player.

Soon DI Fawley and his team are up against the clock to figure out the truth. What they don't realise is that someone is watching.

And they have a plan to put Fawley out of action for good....

What listeners say about The Whole Truth

I have loved this series but nearly gave up at the start of this one. I couldn’t get used to the narration although they’ve been the same throughout! And excellent. So probably me not the book.

I did get into it and I’m glad I did. The things I disliked? Podcasts on audiobooks, this is becoming very popular with authors, I don’t enjoy the insertion, many will (I do like podcasts though!). And, my pet peeve, texts and Twitter in audiobooks! If you were reading you would miss out the names, times, dates, hashtags! You would scan and take in the important information but hearing it over and over again, l (and I may be alone in this) find it tiresome and eye roll inducing.

All that aside, I very much enjoyed it and hope there will be another.

No idea why there are so many high ratings?? For me, the story was very average but then I have listened to many many thrillers and detective books. I didn't like the narrators voices either, they were not dramatic/impactful and did not do the book any favours (especially the female voice). Will be returning.

enjoyed it but poor subplot

listened to all of cara hunters books, enjoyed the continuation but thought the rape investigation was a completely separate, like reading 2 books at the same time as both narratives went off in different tangents

I really enjoyed this book! It keeps my mind sane while driving and it's my time out. Great plot and kept it going to the last minute. Definitely recommend

I loved this and it did get really twisty and surprising near the end. I did have a problem with all the characters and names and had to concentrate hard to remember who was who. But shoulders another from this writer.

Gripping to the end

A really good book,no skippy ,silly bits.All the characters are well conceived and the narration is perfect.

I have enjoyed all the books in this series and this one was no exception. I was unsure and a bit underwhelmed by the book’s description but don’t be put off it is much more than described with a whole other case running along side. The tension really builds and the narration is excellent. The ending seemed a bit rushed but may be the author will pick up straight after in the next book , can’t wait !

Phew! Keeps you on your toes till the very end! Couldn't put it down. Brilliant.

entertaining listen made most enjoyable by the choice of narration. the story to KS along nicely and who doesn't love a "who dunnit" with a twist

This is a wonderful mystery they doesn’t come together till the second half. Such great narrators too.

This book was fantastic….. twists turns excellent character drawing. Narration superb. The preface with the characters explained was a bonus I’m devastated now that I have to wait for another DIFrawley et Al book. Thanks you for the hours of pure enjoyment.

Enjoyable but too many characters and subplots. Probably better for hard copy unless one notes the names. Narration very good.

Another great read from Cara! Can’t wait for the next DI Fawley book to see what happens next! Keep them coming!

Listened to this in a few days mostly on our dog/beach walks which is a no distraction time. I was completely absorbed as always in this series, love the narrators and the character’s stories, very engaging, if anything I found it ended too abruptly and I hope there’s more to follow soon, thank you!

I enjoyed this kept me on my toes and a great listen, especially liked the narration.

One of the best I have listened to.

I really enjoy the approach Cara Hunter uses with two or more narrators. It is something she does in each of her audio books and I love it. The performances were great. I was totally hooked. I hope Lee gets the tv role.
The story itself was also great. It required me to pay attention and to form and then change my own views along the way.
I can’t wait until the release of Cara’s next book.

Struggled to finish. Very disjointed and the changing voices didn't work for me. I won't be added the author to my favourites list.

This is a lot going onto keep you interesting with excellent plots .Had you trying to work out who was the perpetrator. Overall a good listen. Narrator's easy to listen to