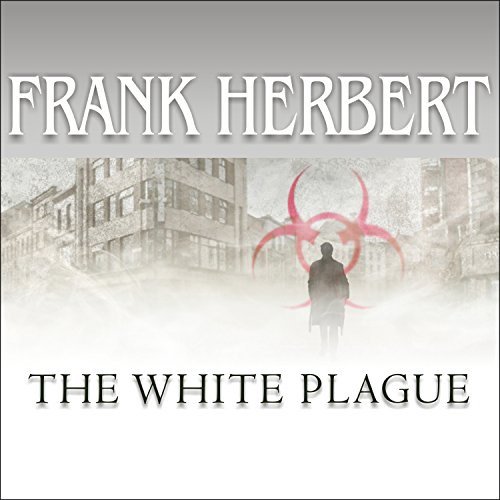 By: Frank Herbert
Narrated by: Scott Brick
Try for $0.00

A warm day in Dublin, a crowded street corner. Suddenly, a car-bomb explodes, killing and injuring scores of innocent people. From the second-floor window of a building across the street, a visiting American watches, helpless, as his beloved wife and children are sacrificed in the heat and fire of someone else's cause.

From this shocking beginning, the author of the phenomenal Dune series has created a masterpiece. The White Plague is a marvelous and terrifyingly plausible blend of fiction and visionary theme. It tells of one man's revenge, of the man watching from the window who is pushed over the edge of sanity by the senseless murder of his family and who, reappearing several months later as the so-called Madman, unleashes a terrible vengeance upon the human race.

John Roe O'Neill is a molecular biologist who has the knowledge, and now the motivation, to devise and disseminate a genetically carried plague - a plague to which, like those that scourged mankind centuries ago, there is no antidote, but one that zeroes in, unerringly and fatally, on women.

As the world slowly recognizes the reality of peril, as its politicians and scientists strive desperately to save themselves and their society from the prospect of human extinction, so does Frank Herbert grapple with one of the great themes of contemporary life: the enormous dangers that lurk at the dark edges of science. The White Plague is a prophetic, believable, and utterly compelling novel.

"A tale of awesome revenge." ( The Cincinnati Enquirer)
"A speculative intellect with few rivals in modern SF." ( The Encyclopedia of Science Fiction)

What listeners say about The White Plague

Great book and not a rip off

I just finished this book a couple minutes ago, and I enjoyed it very much. This story is about a plague that only affects women. It doesn't seem to be like most of the other Frank Herbert books. That made it even more enjoyable and thought provoking.
The book I listened to right before this book was a Stephen &amp; Owen King and it too coincidentally is about a plague that only affects women. The Herbert book was excellent and the King book was trash and seemed to be ripped off from The White Plague.

Makes you think when you finish it.

This was a good story. some parts were long and drawn out. I think a lot of things could of been left out. It was hard to follow some of the characters which some didn't seem relevant to the story. However the plot and ending really make you think Especially if you are are a womab.

This would make a great TV mini series. It's not science fiction as much as its a cautionary tale...With a lot of musings on the nation of Ireland being its own worst enemy. The novel is a bit longer than it needed to be, while at the same time some plotlines could've been expanded. I also found the narrating by Scott Brick slow and overly dramatic.

Good story once through

The White Plague is a decent story, well told, with good narration. It's especially interesting for its portrayal of the terrorist mentality from the perspective of the 1970s and 80s, when the most commonly reported terrorist attacks were those of the IRA and the Palestinians.

Given the advances in genetic engineering since those days, I suspect that Herbert barely scratched the surface of what could be accomplished now by a brilliant, or even mediocre, genetic engineer, but I give him high grades for his vision of the future. Another aspect of the "let's knock off a huge percentage of the human race and see what happens" genre is how the aftermath is handled. What is the author's vision of the remolded world? Again, Herbert does a credible job imagining what things would be like and throws in some interesting twists. We are allowed to see the new world as it is walked by the protagonist. This could become tedious, but is instead well paced and interesting.

In the final analysis, however, I only give the book three stars. While the story is well told, I really didn't care a lot about any of the characters. For that reason, I was ready for the book to be over about two hours before it ended. I doubt that I will ever bother to listen to this book again, and that is something I really look for in audio books.

This book has many applications in the current world scene

Who was the most memorable character of The White Plague and why?

His wife and the twins

Read the book. it's a keeper! I bought a copy for all my friends, and one is Microbiologist.

Written in the early 80s this story is about a plague that’s unleashed on mankind. The efforts seem remarkably familiar in today’s age of COVID-19. While some of the technology is out of date the general concept of the story is timely. A must read.

It's too darn plausable!

It's just too darn plausable! We have all been there in our dreams; now we are there when we are awake... you don't know who to defeat and there is no where to hide. So what do you do now??? Read.

I have read many of Herbert's books. I found some of them good and others not so good. This book falls well within the "good" category.

Even though it was written over 20 years ago, its subject matter (systemic hatred, tribalism, terrorism, WMD, vengence, survival, redemption) addresses situations which could have been taken from today's headlines. I found it very thought provoking as well as entertaining.

This is only the second audiobook I've failed to listen to until the end - it's tedious and drawn out to the pont of one losing the will to live. If you're easily depressed then leave it well alone - it's not the story line so much , as the grinding unrelentless step by step crawl through the plot. You really will have beter things to do!!

This was my first time to listen to one of this author's books. The story was fantastic, totally believable in this day and age. I was hooked from the first page. The only thing that spoiled it for me was the reader's attempt at an Irish accent. Really, does he think we still live in small country cottages and eat nothing but potatoes? It was insulting to listen to. All the begosh and begorrah talk annoyed me so much. A pity really because it marred an otherwise brilliant listen, way up there with Stephen King and Dean Koontz. Would buy more, only if the reader was changed.

I had only read the books Frank Herbert is arguably most famous for and I am pleased to say that he is a lot more than just Dune. A really excellent, thought-provoking book that I rattled through with pleasure, although the subject is obviously dark and apocalyptic. Well developed characters, especially the protagonist John O'Neil, who wreaks a horrible vengeance on those he sees as responsible for the death of his wife and children. This book is well-narrated though I must leave opinion as to the quality of the Irish accents (that are copiously employed by the narrator) to those better qualified than myself, being English. To my untrained ear, I found them perfectly acceptable, as were all the English characters that sounded like they were Eton-educated to a man, and all of them full of Harry Flashman roguery! Excellent, well-read, moving book - I will be reading more non-Dune FH.

Genetics and human nature at its worst

The usual philosophical approach to genetics and politics from Frank Herbert. To be able to fully enjoy it, you need to be at least a bit familiar with the time period it was written.