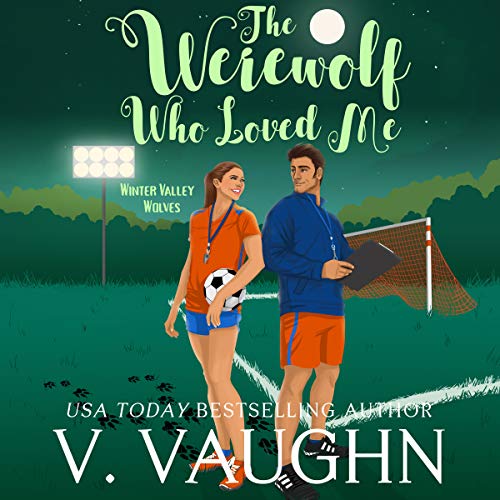 The Werewolf Who Loved Me

Kayla Hayward never expected to end up in Winter Valley for good, but when she returns for her fifth reunion it's easy to stay and avoid the aftermath of a bad relationship. Landing a teaching job alongside her lifelong secret crush makes it even more attractive. While the popular girls didn't date guys like Ergan Wakefield in high school, there's nothing stopping Kayla from giving it a shot now. Except her past.

Ergan Wakefield knows Kayla Hayward is his true mate, and he thought he'd lost her forever when she left for Boston. When she lands back in Winter Valley, he jumps on the opportunity to realize their destiny. But fate has other ideas, and Ergan must find a way to fight the evil that threatens to ruin his chance at happiness.

What listeners say about The Werewolf Who Loved Me

this narration was so much better. I never realized just how much having someone use the right tone affected the story.

One of the better narrations I heard. I loved reading the book, and since starting this job I don't read as often as I like so this is awesome.

First her name is Kayla

The story gets 3 stars for that alone lol. But honestly this one was a little special because of the crazy ex- I had one of those. Glad she got rid of him to find her true mate.

I would recommend this book series to anyone who likes/loved anything like anything paranormal.

Where does Ergan rank among all the audiobooks you’ve listened to so far?

All the Vaughn series are favorites.

The story was in Kayla's voice and much was her telling the story, so Kayla would be the natural choice.

I enjoyed the boat ride, nice and steamy, and the bus ride when Ergan used Kayla to demonstrate what was appropriate between the high school soccer male and females teams riding together.

Truth is stranger than fiction, or at least as strange.

Kayla moves into her family's vacation home trying to make a new life for herself, new job after college, far away from her controlling ex. Back where she grew up she teaches along side her high school crush. Ergan, is giving mixed signals. Is he interested or not?

While trying to adjust to her new life and figure out his feelings, she settles into her new home on the lake. The wolves calling at night fascinate her and feed her vivid imagination. The crotchety neighbor warns her to be wary of the Lake Wolves.

Enjoy this short read and see where her imagination and reality take her. There is danger, steam, and a love story you will enjoy. This is the first story I have read in the series and it did stand a lone. However, now I will go back and read the previous books because I want to learn more.

I was provided an ARC for an honest review.

Would you consider the audio edition of Ergan to be better than the print version?

I would have to say it would depend on my mood & what I was doing for the day, sometimes I feel like reading & others I feel like listening.... I enjoyed both versions equally.

I would have to say my favourite character from Ergan, would be.... both Ergan & Kayla... Ergan because, even though he knows Kayla is his mate, he allows her to leave in the first place, but when she ends up staying in Winter Valley, he's there to protect her.
Kayla because, well she's sassy, know's what she wants, has a wicked imagination (even when her werewolf dream comes true)....

Which character – as performed by Erin deWard – was your favorite?

Hmmm I think Kayla was my favourite performed character, Erin made her just come to life!

There was this scene that occured out on the lake, in a boat..... it was very intense, fan worthy!

I really love this series, to be able to listen to this book has brought out bits that I missed whilst reading. I can't wait to listen to the next book in the series. I love the extra emotion added when listening.

Would you consider the audio edition of Ergan to be better than the print version?

Her Class reunion has came and gone she stayed after all the thing happen before it she now a beloved coach and teacher when her ex shows up, Howling hero and her true crush come to rescue, with few sweet to sweeten up someone her life changes He coach has secret soon they both learn what true it marvelous ride to end of book . Erin voice can carry you away to new world and before you know it the book is over you miss world you were surrounded in by Erin voice.

I received this for an honest review. This was such a wonderful story. V. Vaughn is such a wonderful author. I just absolutely love Erin DeWard. She is problem one of my favorite narrators so far. This book can be listen or read as a standalone. Each book in this series is freaking awesome. Trust me you will not want to miss a one.

Kayla Hayward has left her controlling ex-boyfriend behind and is back home where she grew up. She is now a soccer coach and still drooling over her high school crush, Ergan Wakefield. She has always wanted him but it has always seemed that Ergan does not want her.

Ergan has watched Kayla from afar. He is so in love with her and knows that she is his true mate. Ergan is a werewolf and they must keep it a secret from the humans. When Ergan finds Kayla in danger and a chance that he might lose her forever he shifts in front of her to save her. His alpha who is also her neighbor is there to help and they hope that Kayla does not remember anything.

There is this force that keep pulling Kayla and Ergan together. He is protective of her and is thankful that his Alpha lives close the help watch over her. Will Ergan ever tell Kaya his secret?