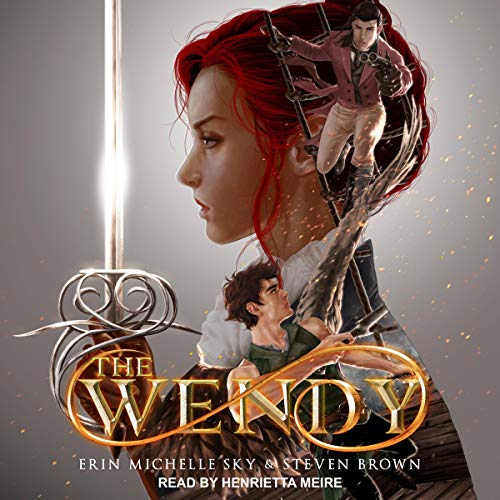 Wendy Darling is an orphan, ridiculed for believing in a future she can never have. She longs to sail the seas in the Royal Navy. Instead, she's about to be sold into service as a dressmaker. When she learns the Home Office is accepting female applicants, she jumps at the chance, joining the fight against the most formidable threat England has ever faced - magic.

But her new position isn't exactly what she'd hoped. Accompanied by a reimagined cast of the original Peter Pan, Wendy soon discovers that her dreams are as far away as ever, that choosing sides isn't as simple as she thought, and that the only man who isn't blinded by her gender...might be her nation's greatest enemy.

What listeners say about The Wendy

This book ensnares your attention from the beginning while daring your eyes to stray from the page. The Tales of Wendy promises a world of adventure and immense satisfaction from start to finish. Well done!

The good: The story is a fascinating new take on the character of Peter Pan and how he came to be, as well as the other characters in the original story. It was an exciting story full of suspense and adventure. Unlike so many stories that mention churches or faith as part of the storyline (minimal here), the author did not use that as an opportunity to denigrate Christian faith. The narration was basically good. I didn’t want to stop listening. I had to force myself to listen to just a chapter at a time instead of listening to the entire book at once, in order to make the book last. The cover art is beautiful.
The bad: The story didn’t really come to a conclusion. It is possible to end one phase of a story while still hinting at more of the story to come—See The Starcatchers series by Dave Barry and Ridley Pearson, read on Audible by the great Jim Dale. The “secret kiss” which was mentioned often was annoying and seemingly meaningless. (Even if the meaning is to be revealed later, it did not need to be mentioned so many times.) The narrator did well with most of the characters. However, she was unable to make her voice harsh enough to be believable as Captain Hook, which was very disappointing. Also, she read everything in a normal tone of voice. Even if a character was supposed to whisper or shout, she would just say “she whispered” or “he shouted” instead of actually whispering or shouting the dialogue.
Overall: Great story. Fun listen. I’m looking forward to the next book!

I really loved Wendy. I personally felt that I could relate to her societal struggles. All of the characters are so well rounded and while listening I felt like I had somehow entered the world with them. The writing is a perfect nod to the original Peter Pan. The retelling is so creative, not just changing perspectives, but rather recreating the story. I’d recommend to anyone who is wanting a quick book that really helps you escape.

An enjoyable but quite different slant on the Peter Pan story. Way to go Wendy! Stand up for womens' rights.

Loved it and very sad to finish it. l am looking forward to the sequel audiobook.