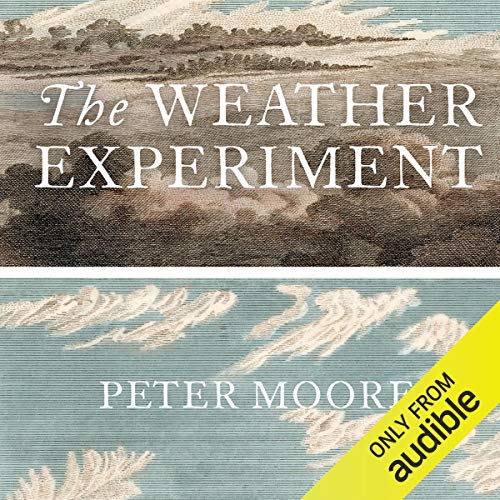 By: Peter Moore
Narrated by: Peter Noble
Try for $0.00

In 1865 a broken Admiral Robert FitzRoy locked himself in his dressing room and cut his throat. His grand meteorological project had failed. Yet only a decade later, FitzRoy's storm-warning system and 'forecasts' would return, the model for what we use today.

In an age when a storm at sea was evidence of God's great wrath, 19th-century meteorologists had to fight against convention and religious dogma. But buoyed by the achievements of the Enlightenment, a generation of mavericks set out to explain the secrets of the atmosphere and learned to predict the future.

Among them were Luke Howard, the first to classify the clouds; Francis Beaufort, who quantified the winds; James Glaisher, who explored the upper atmosphere in a hot-air balloon; Samuel Morse, whose electric telegraph gave scientists the means by which to transmit weather warnings; and FitzRoy himself, master sailor, scientific pioneer, and founder of the Met Office.

Reputations were built and shattered. Fractious debates raged over decades between scientists from London to Galway, Paris to New York. Explaining the atmosphere was one thing, but predicting what it was going to do seemed a step too far. In 1854, when a politician suggested to the Commons that Londoners might soon know the weather 24 hours in advance, the House roared with laughter.

What listeners say about The Weather Experiment

I loved this book. It skilfully took the reader back to a time when the weather wasn't a science - when people didn't know about storms, how rainbows formed, the names of clouds - a time when no weather could be forecast it even reliably described. Anyone who loves to see science applied and evolving will find this book fascinating. The narrator has a style that engenders excitement and freshness to the ideas. It is also a series of stories of amazingly brave and dedicated people who changed our knowledge of the world for ever - and it all happened within the last 300 years.
Highly recommended - I have already told lots of my friends about it.

Lightning from a blue sky

To make a history of the emergence of weather forecasting so compelling is a remarkable feat. The Weather Experiment is an elegantly crafted window into the nineteenth century and the battleground of science against superstition.

gantastic book with so many different stories and insights into the peopke who first decided to attempt to understand weather prediction. i also really enjoyed the narrator and will now download endeavour

This book was fantastic. Although it’s a history book and is full of facts and details, it was like a novel to listen to, helped by the narration which is also excellent. A great, well-written book...and I learnt so much into the bargain.