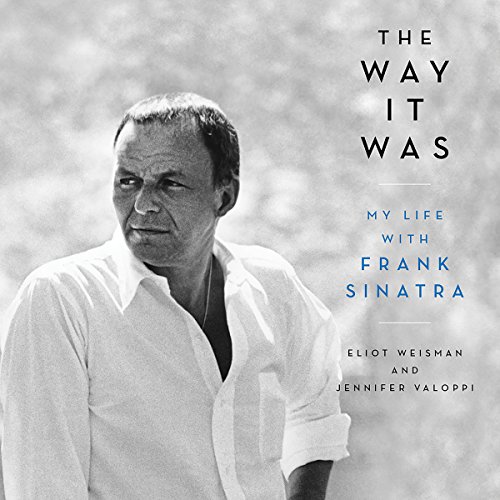 The Way It Was

A candid and eye-opening inside look at the final decades of Sinatra's life told by his longtime manager and friend, Eliot Weisman.

By the time Weisman met Sinatra in 1976, he was already the Voice, a man who held sway over popular music and pop culture for 40 years, who had risen to the greatest heights of fame and plumbed the depths of failure, all the while surviving with the trademark swagger that women pined for and men wanted to emulate.

Passionate and generous on his best days, sullen and unpredictable on his worst, Sinatra invited Weisman into his inner circle, an honor that the budding celebrity manager never took for granted. Even when he was caught up in a legal net designed to snare Sinatra, Weisman went to prison rather than being coerced into telling prosecutors what they wanted to hear.

With Weisman's help, Sinatra orchestrated in his final decades some of the most memorable moments of his career. There was the Duets album, which was Sinatra's top seller, the massive tours, such as Together Again, which featured a short-lived reunion of the Rat Pack - until Dean Martin, having little interest in reliving the glory days, couldn't handle it anymore - and the Ultimate Event Tour, which brought Liza Minelli and Sammy Davis Jr. on board and refreshed the much-needed lining of both their pocketbooks.

Weisman also worked with many other acts, including Steve Lawrence and Eydie Gorme, and an ungrateful Don Rickles, whom Weisman helped get out from under the mob's thumb. Over their years together, Weisman became a confidant to the man who trusted few, and he came to know Sinatra's world intimately: his wife, Barbara, who socialized with princesses and presidents and tried to close Sinatra off from his rough and tough friends such as Jilly Rizzo; Nancy Jr., who was closest to her dad; Tina, who aggressively battled for her and her siblings' rights to the Sinatra legacy and was most like her father; and Frank Jr., the child with the most fraught relationship with the legendary entertainer. Ultimately Weisman, who had become the executor of Sinatra's estate, was left alone to navigate the infighting and hatred between those born to the name and the wife who acquired it, when a mystery woman showed up and threatened to throw the family's future into jeopardy.

Laden with surprising, moving, and revealing stories, The Way It Was also shows a side of Sinatra few knew. As a lion in winter, he was struggling with the challenges that come with old age, as well as memory loss, depression, and antidepressents. Weisman was by his side through it all, witness to a man who had towering confidence, staggering fearlessness, and a rarely seen vulnerability that became more apparent as his final days approached.

"Pushes aside preconceptions about the iconic singer and celebrity....Use[s] anecdotes and stories as a means of time travel." (Gold Coast Magazine)

"A revealing look at the man behind the legend that chronicles everything from dates with Jackie Kennedy to fights with Donald Trump." (Billboard)

"A fascinating account of Eliot Weisman, who served as a manager, confidant and advisor to some of the biggest names in entertainment including Liza Minnelli, Sammy Davis Jr., Joan Rivers and the 'Chairman of the Board,' legendary singer Frank Sinatra." (Parade)

What listeners say about The Way It Was

Shameful that Sinatra was maintained on drugs.

This is was great listen. Fabulous narration. Good and intimate storytelling. Shocking to come to grips with the way Sinatra was maintained on drugs and exploited. The dark side of fame and power.

I’ve read dozens of books on the Chairman of The Board. From his very early years and his ups and downs. But this book had a wonderful look into Mr. Sinatra’s experiences in the latter years of his life. I loved every minute of this book. Thank you Eliot for sharing this with the world. And thank you Ms. Valoppi for the superb writing.

What a wonderful and honest book about FAS in the autumn of his life. David Aston Reese is a fantastic narrator.

Barbara Sinatra should be known as Lady Green Eyes not Lady Blue Eyes. Nothing but a high class gold digger.

Interesting angle to biography of Frank

Weisman's story interweaves his life with Frank's as well as tells his own story. Although he sometimes veers off into an autobiography, he comes back to Sinatra. Sinatra is a complex man, as are many great artists - needy and forceful, used to being handled and expecting it, but also expecting the best of himself and others. While shrewd in business at times, he also honored his contracts despite personal difficulties at times, but also expected the best of others. His experience with negotiating with Donald Trump over a contract to perform at the opening of the Taj Mahal in Atlantic City left him loathing the man personally as well as a businessman, for good reason....for unexpected reasons (no spoiler alert here).

It is Weisman's book after all, so he does go into more autobiographical detail on himself than I found necessary or as interesting, but found some of it tied in with his close connection with Sinatra. Worthwhile audiobook.

FANTASTIC FLY ON THE WALL BOOK

I loved listening to THE WAY IT WAS. There have been very few true icons in our world. Frank Sinatra was one. Worth two credits. I recommend this book to everyone. Steve

it was definitely worth the purchase! I think it's heartfelt and honest! the end is heartbreaking

Amazing story of a amazing life
So grateful that Eliot shared his story with Sinatra with the us. I fell in love with Frank again and again

It was really interesting to learn about Frank and his life. I felt the time was spent telling more about the author. Sometime annoying like he was clearing his name and telling how wonderful he was. It was irritating but kept listening to learn more about Frank. I’m still glad I listened to it. And this is only my opinion.

The story is engaging and more than interesting as it explains the life of an American entertainment icon. Very well done 👍

The Way it Was.

I was so looking forward to listening to the book. Have always loved Frank Sinatra. Forget Frank for about the first 12 chapters. It is all about Mr. Weisman and how smart he is and what wonderful deals he made in business in the entertainment world. Only later in the book does he get really into Frank, then he makes sure we know what a good buddy he was with Frank. Be prepared to put up with Mr. Weisman patting himself on the back throughout the book.

As a lifelong Sinatra fan, I loved this book. Weisman’s authoritative, touching and entertaining memoir of his time with one of the greatest performers ever. A complicated man, with some real quirks it seems...but an undeniable talent and not someone to suffer fools. “A tough guy with a big heart.”
Thanks for sharing the stories and being one of the good guys!

Always wondered about these big names...I still wonder about the other tales, worries, everyday timetable and day to day management of swimming through life's curved balls.....guess they have minders to take care of these events!

focuses on his later years which of course aren't as exciting as his rise and fall but of course the writer can only share his experiences.

This is the best audiobook I've ever listened to ! It has an amazing storyline and gives great insight into the real Frank.