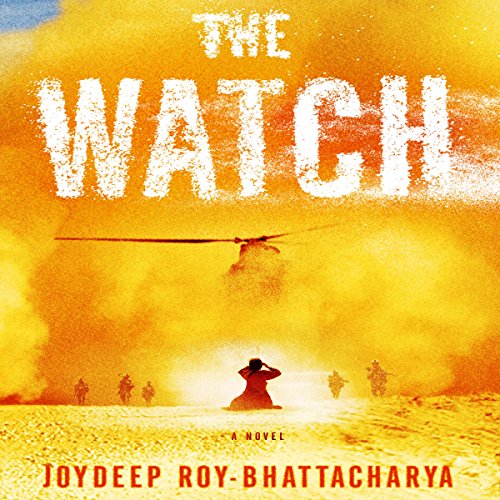 Following a desperate night-long battle, a group of beleaguered soldiers in an isolated base in Kandahar are faced with a lone woman demanding the return of her brother’s body. Is she a spy, a black widow, a lunatic? Or is she what she claims to be: a grieving young sister intent on burying her brother according to local rites?

Single-minded in her mission, she refuses to move from her spot on the field in full view of every soldier in the stark outpost. Her presence quickly proves dangerous as the camp’s tense, claustrophobic atmosphere comes to a boil when the men begin arguing about what to do next.

Joydeep Roy-Bhattacharya’s heartbreaking and haunting novel The Watch takes a timeless tragedy and hurls it into present-day Afghanistan. Taking cues from the Antigone myth, Roy-Bhattacharya brilliantly recreates the chaos, intensity, and immediacy of battle, and conveys the inevitable repercussions felt by the soldiers, their families, and by one sister. The result is a gripping tour through the reality of this very contemporary conflict, and our most powerful expression to date of the nature and futility of war.

“We watch as the resistance of an isolated American garrison in Afghanistan is ground down, not by force of arms but by the will of a single unarmed woman, holding inflexibly to an idea of what is just and right.” (J. M. Coetzee, recipient of the Nobel Prize and a two-time Man Booker Prize winner)
“Every war spawns its major literary works, and Roy-Bhattacharya’s powerful, modern take on the Afghanistan armed conflict resonates with the echoes of Joseph Heller, Tim O’Brien, and Robert Stone.” ( Publishers Weekly)
"Difficult to put down, powerful, eloquent, and even haunting.” ( Booklist)

What listeners say about The Watch

Great book! Would be good for bookclubs

Yes. This is a powerful book, beautifully written. Using one battle and its aftermath, the author gives voice to numerous U.S. and Afghan perspectives on the war, honoring each. She uses dreams and conversations in honoring the diverse reasons warriors on both sides are where they are as well as how their perspectives change, or don’t change, over time. At the same time the reader feels the simultaneous emotional challenges of Dear John letters, home foreclosures and the hopes and fears about every getting to go home. This book certainly isn’t a beach read, but I highly recommend it.

How many perspectives were offered, and how each one was given as much credibility as the next.