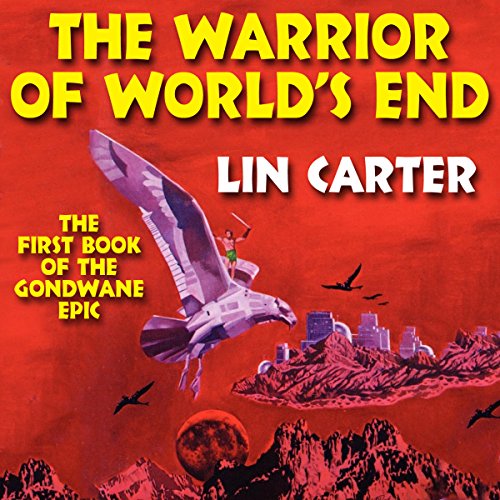 The Warrior of World's End

"I see Gondwane as it shall be in the untold ages of dim futurity, near the time when the Earth shall be man's habitation no more, and the great night shall enfold all, and naught but the cold stars shall reign. The first sign of the end ye shall see in the heavens, for Lo! the moon is falling, falling. And there shall come a man into the lands, a man not like other men, but sent from Galendil."

The name of the man is Ganelon Silverman and this is the first of the classic science fantasy adventure series by Lin Carter!

What listeners say about The Warrior of World's End

Dying Earth genre Fantasy with it's own voice

Somewhere between Jack Vance's Dying Earth and Clark Ashton Smith's Zothique stories, though not as dark or pessimistic, with a pinch of Oz and a dash of The Neverending Story. It's not earth shattering but it was definitely a fun journey.

Lin Carter wrote derivative pulpy adventure stories in the style of Edgar Rice Burroughs, Robert E. Howard, and others. I think of these as second-rate but I pick them up when I find them cheap at Audible — they’re short fast-moving stories with imaginative scenery and lots of action. In a Lin Carter novel you’re sure to find a sword-wielding man with sweaty “thews,” a scantily-clad girl who needs to be saved, and lots of scary monsters. Usually this takes place in some fascinatingly impossible setting such as on the boughs of gigantic trees, under a volcano, in a lost city, or on an uncharted planet.

In The Warrior of World’s End, a down-and-out godmaker and his wife are traveling through a desert when they find a large young man wandering around. The young man has no idea who he is or where he came from, so the couple adopts him, names him Ganelon, and puts him to work in their shop. Ganelon seems a little dull-witted and doesn’t have the skills necessary to be a successful merchant, but when war comes to their town, it’s Ganelon who goes out on the front lines and saves the day. Soon he is apprenticed to a magician who takes an interest in him and he leaves his family behind. Under the magician’s tutelage, Ganelon has a series of adventures and is shown to be extraordinarily bright after all. And, as the magician suspected all along, Ganelon may be a whole lot more than he seems.

The Warrior of World’s End, the first novel in Carter’s GONDWANE epic, is better than most of the books I’ve read by Lin Carter (though I’ve only read seven so far and he’s written so many more than that). Carter’s always got a cool (if not original) setting, but I especially liked this one which is a Dying-Earth-style story where society has regressed to a nearly medieval state but there is magic and remnants of technology to be found, including cloning and constructs. The Warrior of World’s End is a nice blend of science fiction and fantasy and there are lots of little imaginative details that enrich the story — metal automatons, tiger-men and other hybrid creatures, gigantic bubbles of vacuum that threaten to destroy whole towns, a floating island in the sky.

Carter also does a better job with characterization here than in the other stories I’ve read, especially with secondary characters. They’re still somewhat sketchy, but people are given more backstory and personality than I was expecting based on my previous experiences with Carter. There are actually a couple of admirably strong and intelligent women in this story — something that’s hard to find in pulp adventures which seem to be written mainly for adolescent males. (Or maybe it would be more tactful to say “men who are young at heart if not necessarily in body.”) (Or, maybe better yet, “men who still have lots of testosterone rushing through their thews and other regions.”) But, anyway, don’t worry, guys — there’s still a hot young warrior chick in The Warrior of World’s End!

Also better is the tone of this story, at least at the beginning of the book. There’s an omniscient narrator who gives us amusing tidbits about the characters and their society and Lin Carter actually made this cynical reader smile and smirk several times during the first half of the story. I am pretty sure that’s never happened with a Lin Carter novel before. Later, when Ganelon was out on his adventures, the humor unfortunately becomes a little silly and slapstick, but Carter was in top form at the beginning. (Or else I was drunk, but if I was, I don’t recall.)

I was impressed with the beginning of The Warrior of World’s End but my good will began to decline about halfway through because the little adventures that Ganelon had lacked any real tension — things were resolved quickly and easily and by the end it feels like Carter was more interested in showing off his imagination than forming a compelling plot. Still, I’m willing to read the next GONDWANE novel, The Enchantress of World’s End. I have no reason not to continue with the audio version of these which were produced by Wildside Press and narrated by Dan Wallace who does a fine job.

great book.
From a legend i first read in the 80s. wow time doth fly.