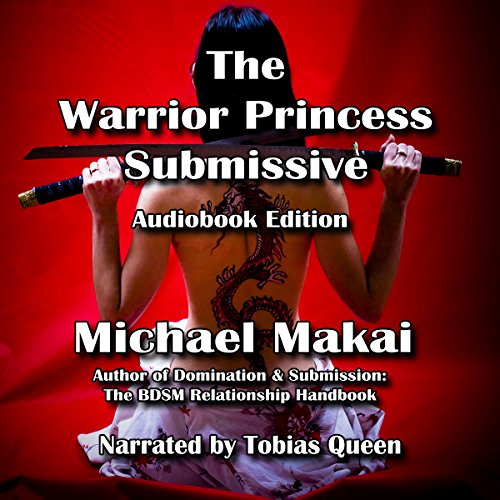 Ever get the feeling, when you hear about all the "classic" categories of submissive, that there must be one missing? You know which one we're talking about. The missing submissive is the one that is the wicked-smart, strong-willed, uber-competent, ultra-competitive, synergistic, switchy, crusader. She's no one's doormat, never a victim. She is a kick-ass submissive for the 21st century. Think: Xena, the Warrior Princess, kneeling at the feet of Hercules.

This definitely isn't a woman in a precarious predicament waiting helplessly for her white knight to arrive and slay a dragon for her. This was a woman who, as she is kicking the dragon's ass, smiles at the white knight standing on the sidelines and says, "Hey, buddy! Feel free to jump right in and lend your sword to this fight. Otherwise, stay the hell out of my way!" The Warrior Princess doesn't need or want a rescuer. The Warrior Princess needs an ally that she can rely upon in the chaos of battle. She seeks a warrior equal to the tasks that she has already chosen for herself, and is demonstrably capable of accomplishing with, or without, his help. She is willing and able to fight the good fight alone, but welcomes the notion of having a worthy partner, fighting by her side. And yet, when the day's fighting is done, she is perfectly at ease with considering herself entirely his - heart, might, mind, body, and soul.

What listeners say about The Warrior Princess Submissive

For submissive men too!

I bought the audio book from audible.com. It is a definite must-read (or must-listen) for everyone,
Especially submissive men! Though written in the "she" format,
Michael Makai explains that he did so for the ease of the reader. i've known many men who were unable to imagine themselves in certain submissive roles, but were not comfortable in Dominant roles, either. Makai writes,
"Think of a general kneeling at the foot of his Queen or King." There is
help and understanding here in this book for you too! :)

Before I knew about this author I read 2 of his books, including this one. He spends more time talking about how “awesome” he is vs giving good info. This book revolves around a sub type he created for himself.

Would you listen to The Warrior Princess Submissive again? Why?

Yes, and I plan on doing so today after not listening to it for a month. The author is well informed about the topic he is speaking on and it helped me find the place I belonged in this world/lifestyle.

About ten minutes of useful information, most if it obvious, among hours of fluff.
Constant quotes from Xena TV show (terrible), and shameless plugs for his previous book, which I didn't care for much either, were the most painful and annoying to endure while distracting from the actual material of some value.
I listened to this 4 times and still struggle to take away anything useful to my relationship with my beautiful redhead suspected warrior princess submissive.
I selected this audiobook, and his previous, the BDSM Relationship Handbook, based on high ratings - but now can't understand how they got there - is the rest of material available on these topics even worse? I hope not. I will have to continue exploring to find out...

absolutely a must read!!

very well written! if you are curious about submissive, read this! I strongly recommend it

A great follow up to the first book! I love Michael Makai's take on D/s. the book is a delightful listen with plenty of personal insight into the community.

there's more to this coin than just two faces...

The text is good and playful, making this an easy yet attention keeping read. It's mostly a continuation of his previous work but his intention, now, is to shine a spotlight on the strengths of those individuals that identify as submissive. Focusing specifically on an archetype of sub that exudes powerful dominant tendencies in Mundania yet is joyfully submissive in her private life.

wow this book blew my mind, having been into the D/s lifestyle now for 2 years and been curious/looking for a sub to match me and having read his other book. it did leave me looking for a sub for me and this book just was WOW yup thats my kind of submisisve. while i would call her *Warrior Goddess sub* rather then princess thats just my opinion/taste. but its for those who wants to look for a sub thats more then slave/pet. and for sub who dont feel like they fit in the story of O or gor type of subs/slaves.