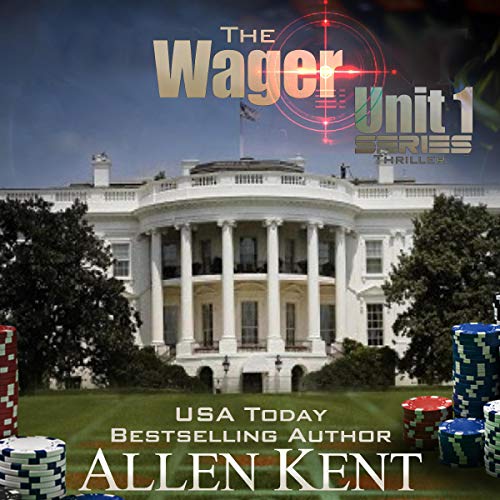 By: Allen Kent
Narrated by: Paul J McSorley
Try for $0.00

A rigged presidential election and a trail of bodies.

While investigating an extortion plot involving high-priced Washington call girls and some of America's most powerful politicians, Unit 1 agent Adam Zak becomes embroiled in a deadly scheme to engineer the election of the next President of the United States.

A web of corruption.

During the run-up to the presidential election, Zak and systems analyst Dreu Sason pick their way through an entangling web of murder, blackmail, and political intrigue that asks of both the government and the media who cover it, "Who can we trust" and "How can we know"?

The Wager is the thrilling introductory Unit One novel. You won’t want to stop listening!

Get your audiobook today!

What listeners say about The Wager


This book has a great political story line l that resembles with current events at this time This book is hard to put down till you reach the last page.. It reads like what is going on in real time. Very good and clear narration.

In regards to the current media bias that seems to be fairly prevalent, this novel kind of struck a chord with me. Although the media is presently leaning in the same direction as my own beliefs, first and foremost the press should be unbiased. Allen Kent's novel, The Wager presents two members of the press who make a wager as to their ability to influence the public. It's fast-paced and well written. And while there is some romance, it is in the background and doesn't distract from the action and adventure. It was especially interesting having the plot being situated around a "problem-solver". I ended up staying up all night just to finish listening.

Being a woman, I tend to scrutinize how female characters are written and I found Kent's characters relatable and well written. I definitely want to hear the rest of the series.

Paul J. McSorley is a great narrator and did an excellent job with this book. I think sometimes that I'm still a child at heart as I dearly love it when a voice actor uses different voices and accents in an audiobook and McSorley does such a good job of that. I really hope he narrates the rest of the series as he is in my top five favorite narrators. The action/adventure/thriller genres are the perfect match for him. P.S. He does a pretty good John Wayne too!

A gentlemen's wager that gets out of hand

Most of us tend to shrug off the lack of moral compass in some politicians but hold newsmen to a higher standard. The Wager is what happens when they betray the truth for a seemingly harmless game, simply to test their power on the American public.

Two competing network anchors—Grant Huston and Chase Rayborn—pride themselves on their skill to shape how America thinks. “We are the gatekeepers. We decide what’s news and what isn’t. Events take on meaning to the degree we give them time and attention.” Rayborn and Huston make a wager to influence the outcome of a presidential election. “The rules would be that we can’t directly attack any of the other primary competitors. They’ll be doing enough of that themselves. We can just generate support for our own man.” Only one problem: they resort to breaking their own rules, and things get out of hand. The results of the gentlemen’s game turn out far from gentle.

The urge to win the bet drives both Rayborn and Huston to go beyond merely reporting or analyzing the news. One of them enlists the head of a militant group to create a national crisis that will generate the kind of fear to drive people into his candidate’s camp. The other enlists a crime boss who uses high-prized Washington call girls to blackmail politicians into changing their positions.

And so, when Pandora’s box opens, we know who unleashed the ideas for the gruesome crimes and who executed them. We know who-done-it. The thrill in the chase. This is where Unit 1 agent Adam Zak and systems analyst Dreu Sason, his romantic interest and sidekick, come in. Rooting for them I bit my nails through the chase scenes.

The narrator, Paul J. McSorley, did great justice to the story, lending different voices and accents to the characters.

Disclosure: I became a fan of Allen Kent, the author, when both of us were invited to take part in the same boxed set.

As I listened, I couldn't help but think of today & all of the political hell that's happening. Very thought-provoking.

Who knew placing a wager with a buddy could be so

dangerous!
This book was not as eye opening for me as it should have been because I think we have all become a little lukewarm when it comes to putting our trust in either our politicians or the media. But this book sure breaks wide open what could happen when people take things into their own hands, especially if you involve ones that are not trustworthy. I really enjoyed this book because it allowed me to see how Unit 1 started and even who is running this secret organization. I enjoyed getting to know Drue, Adam, Anita and The voice on the other end of the line. There is a little more swearing than I like especially the use of the Lord's name but I do realize that Mr. Kent is trying to be true to the people speaking.
I received a free code for this book from Audiobooks Unleashed. This review is my own honest opinion.

The death of an agent opens the door to an unbelievable series of events that contain blackmail and hundreds of deaths. Two competing newsmen bet that each can sway voters to their candidate. What starts as an "unfriendly" wager continues into bombs across America and politicians in compromising photos. I was gifted this from the author.

Oh where to start, this book has a very complex plot and you will need to pay attention to all the details of this book to follow along with it to figure out who the bad guys really are. The characters are very well developed and this story has a great flow to it. It will keep you glued to your device to continue listening to the story, because you will not want to hit pause. The narrator was very nice to listen to and had a clear, deep voice. For an overall rating I would definitely recommend this author to others and very much enjoyed this book.

On a side-note: I am very aware of the part of Idaho that is featured in this work of fiction. Both Grangeville and the Camas Prairie are beautiful areas filled with wonderful hardworking families. This area is rich in farming, logging along with so many great ways to have outdoor fun.

As always, I love anything narrated by Paul J McSorley. The story is great! Pretty much what is happening in current times. Can't wait to listen to the other books!

This book is a very well written and believable story that could well happen in the political world of today. It involves those dedicated to solving problems and those who cause the problems. The book is hard to put down and you want to keep listening to see how it plays out.

The narrator is great. He has a great range of voices for the characters and manages to bring out the moments of excitement and danger well.

This book was provided free of charge and this review was voluntarily done.

Political Intrigue In A Crime Thriller.

Who is behind the manipulation of the American government through the blackmail of key politician's? Adam Zak, a member of an elite secret team is tasked to find out and stop the blackmails. This is more than the usual crime novel. Fast paced, twists and turns, political intrigue, well written and nicely narrated. It's a real thriller and very hard to put down. A very enjoyable listen.