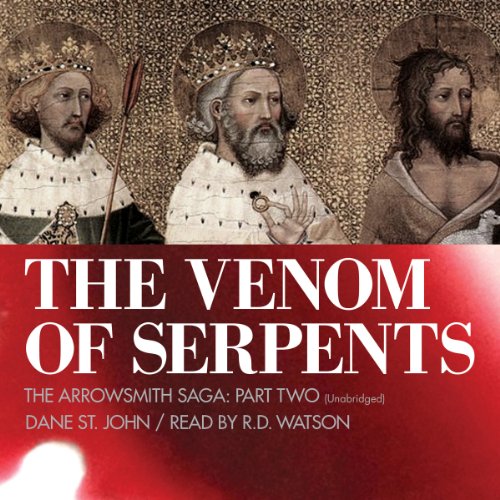 The Venom of Serpents

In the second segment of David Arrowsmith's dramatic narrative, nectar - the wine that flows between England and France during the 14th century - truly turns to venom as Jean Créton continues to record the man's scintillating account. This as they nervously await Hugh Lawrence of Colchester to reveal himself at the Scottish friary and reclaim the panel of saints in David's possession. The story resumes in the year 1370, when David has married the ravishing Eleanor, taken over the Pelican Tavern Inn in London, and recommenced his apprenticeship in the wine trade. Little Jack is now three, and although he is not his natural son, David raises him as his own, even as he longs to learn the identity of Eleanor's wicked attacker. With civil wars brewing in Brittany and Spain, and France and England openly fighting, the truce has ended and the Hundred Years' War is again in full swing, threatening to bring everyone into its fold. In backing Edward the Black Prince and the Plantagenets, David distances himself from the Lancaster faction, including John of Gaunt and Hugh Lawrence, eventually earning their hatred, while John Wycliffe struggles to bridge them, and John Ball dreams of revolution.

What listeners say about The Venom of Serpents

I love historical fiction and read (& listen to) mountains of it, and my focus for the past 8 years has been the so called "Middle Ages," particularly the 1300's and 1400's. Despite all the many titles of this genre that I have voraciously consumed over the years, the two books of the Arrowsmith Saga, of which this is the second volume, blew me right out of the water !! After listening to both Book One (The Nectar of Angels) and Book Two (this title) on Audible, completely captivated by every single word in a way that rarely happens to me, and in addition (as the icing on the cake, as if any were needed) seduced by the brilliant narrative skill of R. D. Watson, I am so besotted that I am actually going to buy both BOOKS and hold them in my hands and peruse them in the form in which they were first created, namely on paper. But these two audiobooks are both simply stellar, and I highly recommend them to anyone who loves history, anyone who loves the Brits, anyone who loves historical fiction, and indeed anyone who enjoys a tale spun so intricately that Dickens comes to mind--- except that here we have not only great writing, but also a fascinating look at a distinct period of history, complete with kings and knights and churls and priests and historical figures like Wycliffe !! Love, violence, art, sudden twists of fate, it's all here. Well I could go on and on but ……... just buy this pair of audiobooks and have a whale of a time listening to them !!

A sequel that lives up to expectations & then some

The Venom of Serpents carries on the torch of the literary fire that The Nectar of Angels ignited. It brought the story of David Arrowsmith to a satisfying and gratifying conclusion. The suspenseful tale and brilliant wordsmithing was enhanced by this deeply educational rendering of a the wine trade in 14th century France. I was riveted by the story, and along the way, enlightened about a period in history up until now I knew very little about. Like The Nectar of Angels, R.D. Watson's reading was perfect for a tale of this era.

A great ending for " The Nectar of Angels " !

I can't say much more for "The Venom of Serpents" as I already have for "The Nectar of Angels". Such an elegantly and maturely written adventure to sum up all the strife and turmoil as lived at this moment in time. Hats off to Dane St. John for keeping the literary at great esteem. An excellent Christmas present.

Part two is even better than part one

If you could sum up The Venom of Serpents in three words, what would they be?

I liked the in-depth history of this book- it's very well-researched, and a lot of the characters are real (as I found out when I went to search for them on Wikipedia or in books). The buildup leading to the Peasants Revolt is a pretty fun ride, and hard to believe a lot of it actually happened the way St. John portrays.

What does R.D. Watson bring to the story that you wouldn’t experience if you just read the book?

Amazing talent. I got to the point where I just felt like I wasn't having a good day unless I listened to his voice (and this story) at least once. He is a true artist, bringing lots of flavor and dialects and accents that really round out such a diverse set of characters.

If part one "The Nectar of Angels" is a stroll through the countryside then part two is a heated race to a harrowing end. Dane St. John does NOT disappoint in his conclusion of the Arrowsmith saga. I couldn't put it down, I had to know how this saga ended! Besides the immense knowledge that the author shows for 14th century Europe, the saga created by St. John is one of creativity and master storytelling.Great job Dane St. John and I'm looking forward to your next novel!