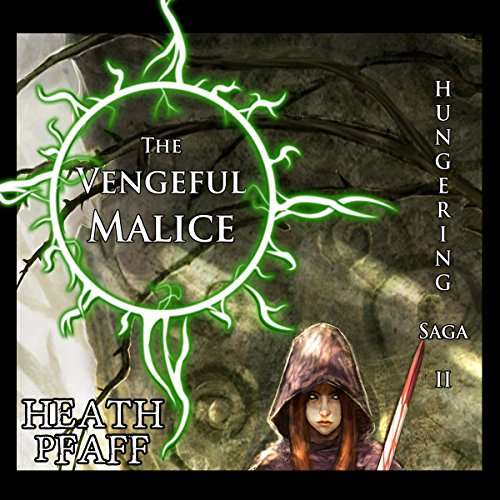 All men who would change the world, must first be willing to destroy it. The continuation of the epic saga began in The Noble Fool, The Vengeful Malice returns to the memories of Lowin Fenly as he is stirred from his respite of self-loathing and forced on a quest to bring peace to his people, his land, and himself.

A new menace comes from the sea, and it has come to devour mankind whole. The kingdom is at war with itself, and with a new enemy, and powerful men have decided that Lowin will play an important role in the upcoming conflict whether he wishes it or not.

What listeners say about The Vengeful Malice

What did you love best about The Vengeful Malice?

All of the plot twists and turns. The series just keeps getting better! I couldn't wait to continue this story after finishing the Noble Fool.

The strong emotions it brought up in me. Shows what someone who is just a "regular guy" will do for justice.

What about Paul J. McSorley’s performance did you like?

His voices brings the characters to life. You become part of the story listening to all of the distinct voices.

I did have an extreme reaction to this book. It didn't make me laugh or cry, but it did make me become introspective. What would I do if this happened to the people I love?

Can't wait to continue onto the next book!!!

Wow! I feel like I was Noble during the fights!

I would highly recommend this book to my friends. It's a different type of story and there are lots of unexpected plot twists. Everything comes together as the story moves along. Very good fantasy book.

What was one of the most memorable moments of The Vengeful Malice?

Towards the end when Noble and Malice confront Weaver. Didn't think it would come out that way!!

What does Paul J. McSorley bring to the story that you wouldn’t experience if you just read the book?

Paul J McSorley does an excellent job with this book. Paul has a number of characters to keep straight and he does a fine job. Paul does such a great job the I almost feel that I'm Noble during the fights! The blow by blows are very intense.

I just really enjoyed this book.

Very good book and a great narrator. Keep up the excellent job.

Continues to be an EPIC Fantasy Trilogy!

Where does The Vengeful Malice rank among all the audiobooks you’ve listened to so far?

Heath Pfaff has this genre down! It's possibly the best fantasy series I've allowed myself to delve into so deeply.

What was one of the most memorable moments of The Vengeful Malice?

Without giving any spoilers away...Finding out what the Hungering really was as well as the encounter with the very intriguing and mysterious Kaziem wolves. The action and adventure is heart pounding and never lets up! Just like Noble's heart.

Which character – as performed by Paul J. McSorley – was your favorite?

There are so many, and from book 1 to book 2 he is consistent with the repeating characters as well as original with introducing the new characters. But my favorite character is Noble without a doubt.

I listened to the over 12 hour book in 4 days. I couldn't stop thinking about what might happen next. I found myself thinking about it even when I was going through my day. That has only happened with one other series in my audio book listening which was with the Dark Tower-gunslinger series by Stephen King.

I can't wait for Snow Song! I'm sure it will pull the entire series together. But the ending of the series for me will be bitter sweet.