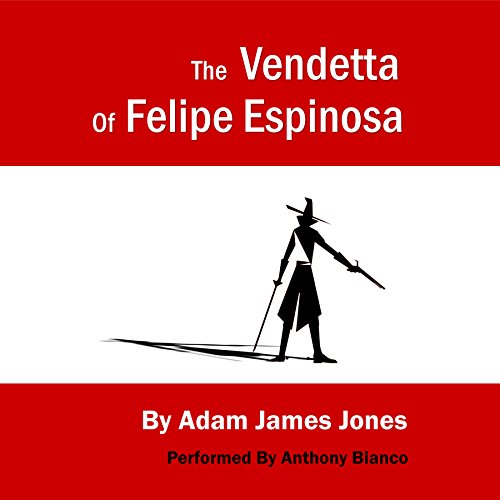 The Vendetta of Felipe Espinosa

By: Adam James Jones
Narrated by: Anthony Bianco
Try for $0.00

As the Civil War raged and goldfields beckoned, a gunman stalked the territories on a mission to kill American settlers. He would elude governors and armies, bounty hunters, and posses, until his demise at the climax of a fierce high-country manhunt. By then, Felipe Espinosa had claimed more than 30 lives to quietly become one of the nation's first serial killers and foreign terrorists.

A sweeping historical epic, The Vendetta of Felipe Espinosa is a saga of Confederate guerrillas, marauding Indians, a severe religious order, vigilante miners, and one migrant family looking for peace in a violent country.

What listeners say about The Vendetta of Felipe Espinosa

A legend in the making

Wow! I am so surprised that this little known epic isn't more prominent. Superb story-telling and rich writing. A must read.

What a beautifully written amazingly "visual stunner " when you read the book, then listen to audio" you again are transported thrillingly to the characters , each thought provoking in me an emotion for their back story , you also see the mountains the "territories " the landscapes , each character beautifully written and pure authenticity abounds. I am ready for movie ! Please publish more of this amazing creative original talent!
Sincerely
Susanna Willey

This was a wonderful story that more people should know about. I live in the area where this book is based so it's a really neat piece of history for me.

I struggled with the narrator. I actually couldn't listen anymore and just read the book.