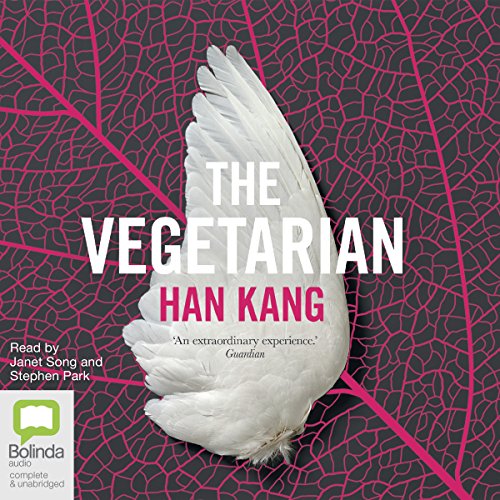 By: Han Kang
Narrated by: Janet Song,Stephen Park
Try for $0.00

An irresistibly weird and sensuous story of betrayals, transformations and social taboos.

Yeong-hye and her husband are ordinary people. He is an office worker with moderate ambitions and mild manners; she is an uninspired but dutiful wife. The acceptable flatline of their marriage is interrupted when Yeong-hye, seeking a more 'plantlike' existence, decides to become a vegetarian, prompted by grotesque recurring nightmares.

Fraught, disturbing and beautiful, The Vegetarian is a novel about modern-day South Korea but also a novel about shame, desire and our faltering attempts to understand others, from one imprisoned body to another.

What listeners say about The Vegetarian

I loved this title however the narration of Janet Song seemed to be mechanistic at best, computer based at worst. Had it not been for the recommendation of the book by a Korean colleague I am not sure I would have persevered. Do give the book a go, but perhaps read it, or find alternative narrators.

The narration was poor, it felt forced. The story was unusual, but the writing style was repetitive, in idea and dialogue. It was a disturbing tale of hysteria, giving the protagonist a voiceless voice.

I think that this is probably a very good book but I think much of it could have been lost in translation, it was very strange and confusing, a bit like someone's weird dream, I'm sure in Korean read by a Korean it may have held much more meaning, I may be wrong, but it wasn't for me

If this is a typical example of the ingenuity and artistry of South Korean literature then I must explore more.

Arrestingly evocative - a book I will not forget easily, and one I will recommend.

Glad I finished it

Disturbing but eye-opening novel by a talented author. Difficult to finish but stick with it.