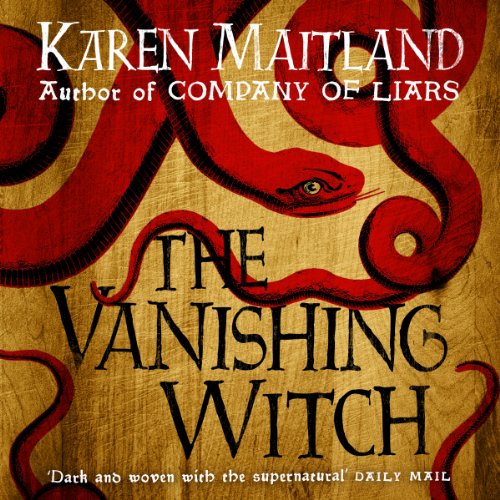 By: Karen Maitland
Narrated by: Jonathan Keeble
Try for $0.00

The critically acclaimed Queen of the Dark Ages, author of Company of Liars, introduces a chilling novel set against the backdrop of the Peasants' Revolt.

Take one wealthy merchant. Add one charming widow. And one dying wife.

The reign of Richard II is troubled, the poor are about to become poorer still and landowners are lining their pockets. It's a case of every man for himself, whatever his status or wealth. But in a world where nothing can be taken at face value, who can you trust? The dour wool merchant? His impulsive son? The stepdaughter with the hypnotic eyes? Or the raven-haired widow clutching her necklace of bloodstones?

And when people start dying unnatural deaths and the peasants decide it's time to fight back, it's all too easy to spy witchcraft at every turn.

What listeners say about The Vanishing Witch

This started out really well, but I felt it ran out of steam towards the end and I wasn't sure all ends were tied up. There were elements that were definitely not for children, but overall this did feel like a book for younger readers. To me, a better book in a similar vein would be Witch Child by Celia Rees. There were a few twists and turns here and there, but they were fairly predictable and the central character, Robert, wasn't very likeable.
The narration was excellent.

A bit disappointed with this one

What did you like most about The Vanishing Witch?

I love Karen Maitland books and was so excited when this one was published as it seemed a long time coming. However, this book was disappointing and didn't have the "excitement" and surprise element of previous books. I did not sympathise with many of the characters and it appeared that the book was completed in a hurry. Was there a deadline?

Would you be willing to try another book from Karen Maitland? Why or why not?

I love Karen Maitland's books and have her full collection and would always give another of her novels another go.

None really entranced me

Maitland at her best

I love her books but this one had as many twists and turns as a twisty turny thing. Keeps you guessing until the end and you'll still be surprised by the outcome.

The plots twist and thicken ... who will survive, who will die? Loved the ending.

If you’ve listened to earlier books by this author you’ll know how she weaves a strong story into a backdrop of mysticism and creates a powerful atmosphere of medieval life. Set in the 12th C this book has rulers and employers mercilessly exploiting the hard-working poor as they try to scrap a living burdened by taxes and low wages. Corruption is everywhere and superstition haunts all walks of life. Death and witchcraft abounds in the central story as rich cloth merchant, Robert, is captivated by a widow newly arrived in Lincoln and his troubles begin. Don’t expect subtle characterisation or nuanced morality: this is good old-fashioned good versus evil battling it out: simplistic but enjoyable nevertheless. I was intrigued by the references at the beginning of each chapter to superstitious beliefs of the period which seem preposterous to modern ears but held sway in medieval times.

There’s some pacey writing in this book, particularly the description of the rampage through London during the Peasants’ Revolt led by Wat Tyler

The narrator is outstandingly good.

Gripping story and excellently read. The narrative illustrates the life and colour of the time (Richard II) and brings it all to life.
Highly recommended.

I didn't think I was going to enjoy this story. It started slowly but became a fantastic listen. the characters are well defined and you become very involved in their lives. an enjoyable story and we'll worth listening

"mixed feelings on this one"

What I liked best was the fact that it was totally different from anything I had listened to/read before -and definitely not predictable.

Which character – as performed by Jonathan Keeble – was your favourite?

All of them Jonathan Keeble is an excellent narrator and I will definitely buy more read by him.Although I did find it rather annoying when he kept whispering a couple of the female parts so quietly I had to keep "rewinding" to try and catch what he was saying-it spoiled the story a bit.

I personally hate reading reviews where the reviewer just tell you what the story is-Iso I will not do that here.
I bought this book after reading a few good reviews.The first couple of chapters had me hooked....but then the story kept drifting off and going nowhere-and I started to wonder what I had bought.I did not really get back into the book until about half way through-when the story really started to pick up and have some substance to it.Part of my lack of being able to concentrate may have been more to Jonathan Keeble whispering too quietly,I could not hear him-this spoiled the book for me.it made it hard work rather than a relaxing listen.I will listen again,but next time I will download to my laptop and listen with external speakers turned up full.
Karen Maitland did capture the era extremely well-except when she forgot herself and used a modern cuss word occasionally...but the story did eventually grab me and hold on to me to the end and I am glad I got there.
Would recommend this one,but if you are slightly hard of hearing download to your computer not your Kindle.as the volume on Kindles only goes up so far and not far enough.

This book is marvellous. A really good story with rich characters. I loved the period it was set in and found myself rooting for some people whilst detesting others and couldn't wait to find out what happens next. Would love for there to be a sequel.

Loved this gripping tale from Karen Maitland with brilliant narration too! Listened to every book now, hope there will be more soon.

While the story was quite interesting, ending fell short. I expected a lot more from such a promising plot. Lots of loose ends and all in all, one of the most dissatisfying endings I ever read. Thanks to marvellous performance, this was a good read while commuting to and from work.